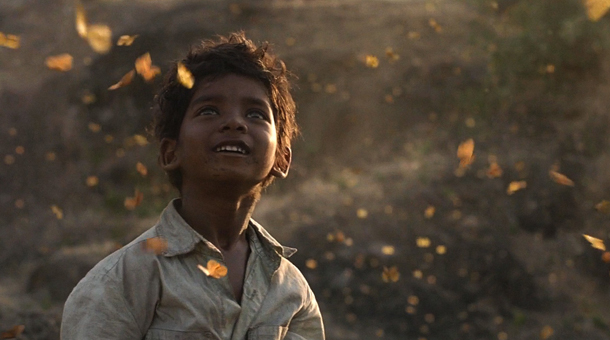 How Greig Fraser and Brett Harrison used the MōVI M15 on the award winning film, Lion.

Aside from being an amazing true story, Lion has received a staggering number of nominations and awards. The film, whose story spans over 25 years and was shot in both Australia and India, follows a five-year-old Saroo (played by Sunny Pawar) as he wanders lost through the streets of Calcutta, thousands of miles from his home. After navigating the dangers of living on the streets, he is adopted by an Australian couple. Twenty-five years later, Saroo sets out to find his family.

Awards are in order for actors Nicole Kidman, Dev Patel, and others. The screenplay, soundtrack, and cinematography have all been recognized. The film is nominated for Best Motion Picture of the Year (Oscar) and Best Motion Picture — Drama (Golden Globe). The list goes on.

Director of Photography Greig Fraser shot Lion on the Alexa XT, Alexa M and RED Dragon instead of film, commenting that “[Film] just wasn’t a viable option. I think that, realistically, we wouldn’t have been able to achieve half of what we achieved if we shot on film.” (source) Fraser’s use of Alexas, drones, the MōVI M15, and Digital Sputnik LED lights, shows that the use of new technology does not compromise results and can prove instrumental in challenging circumstances. Critics and awards bodies are lining up behind Fraser’s choices with nominations for an Oscar, the BATFA Film Award, and others. For his work on Lion, the ASC have awarded Fraser the 2017 Theatrical Feature prize and he’s also taken home the premiere Golden Frog award at the Cameraimage film festival.

To capture the story from the perspective of young Saroo, Frasier used the MōVI M15 and the ARRI Alexa M. “We used Alexas on a gimbal, and it was the flexibility of that digital format that allowed us to be more free with our decisions, and be able to shoot on a train with very little lighting,” Fraser told Deadline Hollywood. 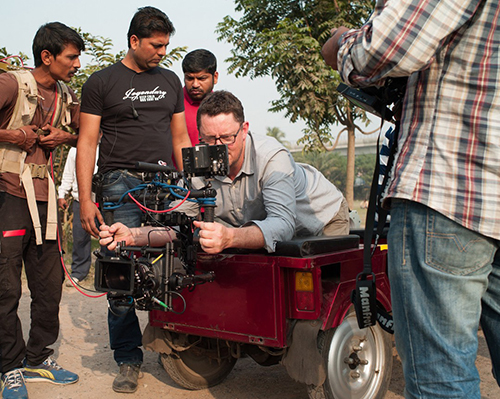 Brett Harrison was originally tapped for the MōVI technician position and was bumped to the operator position during testing. Before going over to India, he ran some tests using silicone rope, much like that used on the Klassen SlingShot, to attach the MōVI to an EasyRig. Brett shared some of his techniques with us for moving the camera on Lion.

“I did a few tests in Australia with the Alexa M on the M15 — trying to approximate the Panavision P-Vintage lenses we’d be shooting with. I could see it would have been awkward with the M10, but the 15 worked easily. Then, with the EasyRig and rope, it was flying pretty well. So I took that setup to India to show Greig. They were pleasantly surprised with it — after watching the rushes they decided to have it play a lot more than they’d originally thought. The thing for me was working out how to get a good isolation between my body and the rig, so I kept on experimenting with the way that it was attached to the EasyRig — the main discovery was the importance of a central, single pivoting connection that counters the hips. The weight averaged 9 kilos so I needed some support. The beauty of suspending the MōVI on EasyRig or Slingshot setups is you maintain most of the responsiveness of handheld — it doesn’t have that mass that a dolly or even a sled does — but it also helps fast-moving shots to fly a bit more smoothly.” 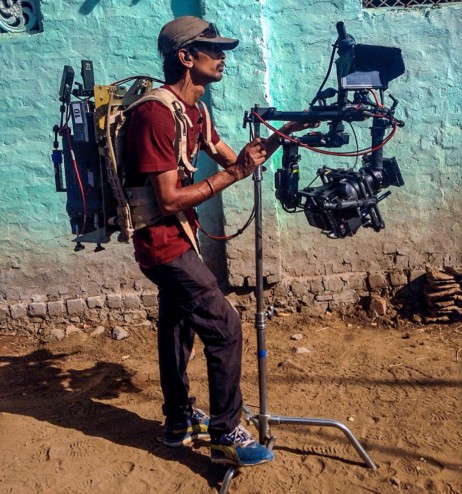 Manish Ghadge with the camera body on a backpack (Credit: Brett Harrison)

The Alexa M requires additional crew to function with the MōVI M15. “We had 3rd AC Manish Ghadge with the M body on a backpack and we had only three meters of optical fiber cable and we would run around like that. Manish shadowed me so well I sometimes forgot he was there and he had to remind me! Again without that skill, it wouldn’t have worked so well. Manish and the B unit team really took the whole thing on. They could build up the rig in under 15 minutes.”

“We did mostly dual user, but there was about 10 percent majestic in there. All of the dual user operating was done with the PLC Veracity wheels … I think the availability of the wheels was a deciding factor for Greig.”

The team had not booked a Steadicam operator for the India leg of the shoot. There were concerns about Sunny’s height. “…it’s arguably an awkward range for the Steadicam,… right between high mode and low mode.” Brett’s EasyRig setup put the camera right at Sunny’s height. “[Greig] appreciated the look of the gimbal operating, because it’s essentially handheld operating. It happens to be smoothed in the rotating axes, but it’s still sort of a direct connection between your body and the rig — I think it helps with being attentive to the movement of the actors.” 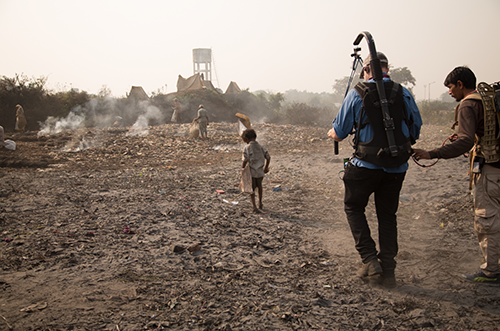 The relationship between Brett and Greig had to be considered. The MōVI can be used in dual operator or single operator (Majestic) mode. In dual operator, there are a handful of methods for framing. The camera operator frames while the gimbal operator carries the camera rig. “We did mostly dual user, but there was about 10 percent majestic in there. All of the dual user operating was done with the PLC Veracity wheels … I think the availability of the wheels was a deciding factor for Greig.”

During testing, the topic of an on-board monitor came up. Brett made the case, “If I can see the image, for me there’s a hand-eye coordination going on there but the most important part is that I can see the tendency of the operator’s framing, and that allows me to plan each step. It truly is a dual operation because your camera position always dictates how you’ll frame, and so the framing dictates where you’ll move. While I wasn’t purely a camera operator, in practice I might take on the responsibilities of a camera operator — especially when the remote operator is far away from the lens — you work with the actors and crew and make the shot function in the scene. It’s more responsibility. And that’s a really cool thing to expand on the relationship between a camera operator and a dolly grip. For me and Greig, it became pretty single minded without much discussion and I think the design of the MōVI made that fairly natural.”

About 85% of the MōVI shots were on foot, which particularly favored the style and circumstances of the shoot. “It’s important to say that not all the movement with Sunny was blocked out — there were many scenes where we just wanted to follow what he was doing and be less obtrusive… So I just glued myself to the movement. With a handheld gimbal, when [the dual operating] clicks in it’s that bit more compelling to me — if your operator’s framing is working with your walking position throughout the shot, it’s instant confirmation of where you’re going. There’s also a tactile feedback — you can feel the torque from the motors through the rig panning and tilting, which is a bit like sharing the handle with the operator — sort of like the guidance of the grip when you’re backing up.”

The MōVI allowed the team to get into small spaces. They shot using a wide variety of methods, shooting from vehicles, from a dolly, from a rickshaw, from a Steadicam sled and even pulling Brett down the aisle of an airliner on inline skates. “The aisles are so narrow that we couldn’t get the available grip equipment in — even the M15 handles had to go perpendicular, … so we had our grip pushing and pulling me along the aisles. ”

Despite these advantages, the shoot was often grueling. From intense heat, uneven ground, huge crowds of spectators, oppressive smog, dust and other health hazards. For one of the key shots, the crew shut down the Howrah Bridge in Kolkata for a few minutes at a time. “I think it was the first time they’d ever shut down the bridge. I had [stomach sickness] that day where I was almost keeling over,” Brett recalls. All the shots on the bridge are of Sunny running. “When Sunny runs, he can switch his direction in a heartbeat. We had to catch him running across the bridge. I think we were on the 50mm where he runs right up to the camera and he was moving so rapidly that we switched to majestic. The settings ended up being pretty low to maintain framing. The natural control of the motors made it possible to pan quickly but also lock off the shot reasonably well at the end.”

Another tough day was a shot where Sunny is running through his hometown. “And it was just physically challenging — it was a hot day, and we kept on running and running. It was getting a little bit dim running on coarse gravel. It was a hard day, but it was one of the most successful days.”

The MōVI Team chasing Sunny on location in India

Greig Fraser didn’t just use the MōVI to track with the camera. Brett explains: “When Sunny/Saroo is in the field with the butterflies flying around, some of those shots are on the MōVI, but you wouldn’t necessarily know. It’s just a drama moment. The speed and convenience of that, being nice and still, enabling the operator to frame up exactly how they want when they aren’t holding the camera, to capture those calm moments. “There’s a shot on the train when he’s looking in from the platform, trying to find his brother and that’s just me squeezed into the back of the carriage doing my best tripod impression.”

A shot from the film, Lion

Lion began shooting in January of 2015 and was one of the first productions to employ the MōVI M15. As more and more directors and cinematographers have an opportunity to use the MōVI technology, the limits of camera movement continue to be challenged. “On an expensive production, perhaps initially you’re trying to match existing kinds of shots without trying to push the envelope. But if you’re willing to pipe up occasionally and say ‘I think this is actually another way we can do it,’ that’s always been beneficial because I think what you can achieve with it is actually adding to the shooting language.”

A huge thanks to Brett for taking the time to share his story with us. Be sure to check out Lion, and watch for more MōVI work coming from both Brett Harrison and Greig Fraser.