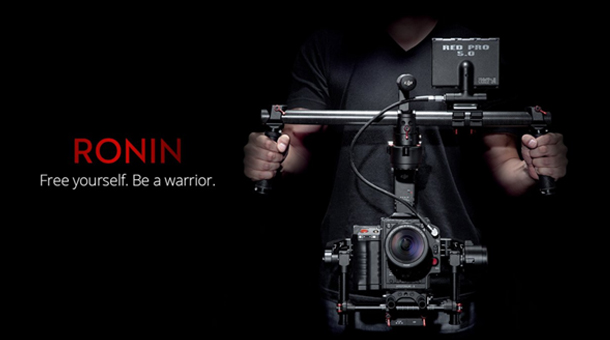 The DJI Ronin brings a new standard for stability and precision to film making. The Ronin is a handheld 3-axis stabilized gimbal system for capturing extremely smooth footage. Fast to set up, durable, and flexible it is ideal for the professional set. Customize it to your needs using the easy and intuitive app.

DJI Innovations is a company that’s best-known for its consumer and professional-grade multicopters, including the popular Phantom line of quadcopters. One of its products, the ZenMuse, is a motorized gimbal designed to keep cameras steady and level when mounted beneath such aircraft. Now, that same tech is available for hand-held video cameras, in the form of the Ronin stabilizing rig.

The 4.2-kg (9.3-lb) aircraft-grade aluminum Ronin can reportedly accommodate any camera/lens combo weighing up to a total of 7.3 kg (16 lb).

Initial balancing is achieved using hand-adjustable knobs and quick-release latches, and is facilitated by measurement markers on the rig. The setup can then be fine-tuned within minutes via Bluetooth using the accompanying DJI Ronin app. According to the company, “simply tapping the Auto Tune Stability button intelligently adjusts parameters based on your camera rig’s weight on each axis.”

Once the Ronin is calibrated, its integrated sensors selectively activate the motors to continuously keep the camera level on three axes.

It can be used in three different modes – these include Upright, in which the camera/gimbal protrude up from the main handlebar to be at the operator’s eye level; Underslung, that sees the camera suspended below the bar, and which is used when the rig is mounted on a jib or crane; and Briefcase, in which the rig is held sideways to present a slimmer profile when doing things like going through doorways.

For situations where the main camera operator has their hands full, an included radio remote control unit allows a second operator to control the pan, tilt and roll of the camera, independent of the Ronin’s movement.

Runtime for the main rig is approximately four hours per charge of the 3,400-mAh 14.8-volt lithium-polymer battery. Should users wish to use some of that juice up on attached peripherals such as follow focus devices or monitors, however, they can do so via a built-in power distribution box.