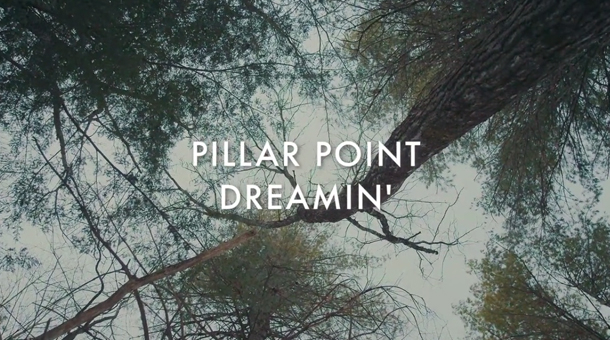 We got up at 4:30 in the morning to prepare for our first shots amongst the commuter rush outside Penn Station. It was 10 degrees and windy, and the sun refused to rise. Camera batteries lasted 20 minutes in the cold. Hands hurt just holding the camera. Our lenses froze, making them nearly impossible to muscle into focus. We warmed equipment in the car, then lined the bag with hand-warmers. It worked, barely. 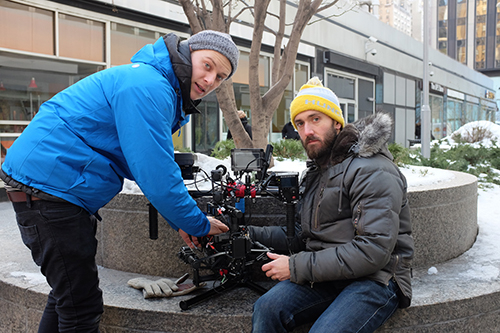 I’d chosen Dai’s coat to stand out amongst the black uniform of metro New York. Just about everyone emerging from Penn Station came dressed as I’d dreamed, in all monochrome, and Dai’s coat stands out better than we could’ve possibly hoped.

The following day, we went upstate to film in a forest I’d scouted in previous months, and chosen for its trees, streams, and frozen waterfall. When we arrived, we were met with an unforeseen problem: way, way too much snow. It was 2 degrees. Rivers were frozen and covered in several feet of powder. Dancing — much less running around with a camera rig the price of a Porsche — suddenly seemed an absurd proposition. I cooked dinner for the crew and we talked about how we’d handle the morning.

We got up at dawn, calibrated our equipment, and set off for a day of improvisation in parts of the forest that might be accessible. We knew we’d be jumping out of the car, hiking into the woods, and filming for as long as possible until Dai, or the camera, froze beyond cooperation. Coming up with ideas on the fly is nerve-racking — especially when several people are on board — because there’s a lot on the line. But if you have a good, small team all in sync, it’s the most exciting way to work. Joe, Søren, Bekka, Dai, and Sam were all on board without hesitation, which made it possible to make quick decisions and try new moves in un-scouted locations, and know that we’d make it work. 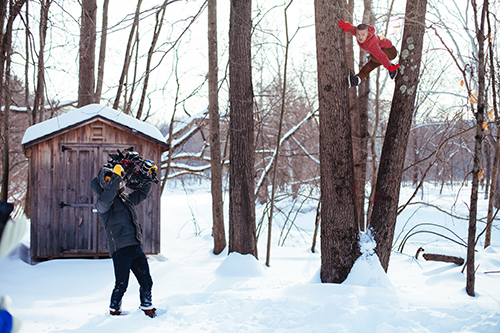 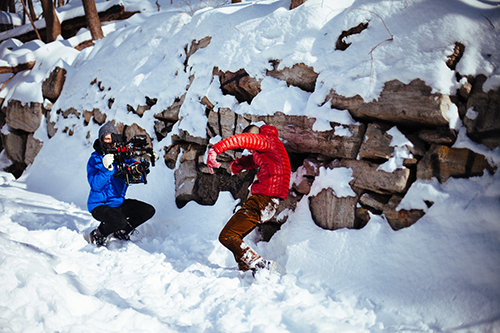 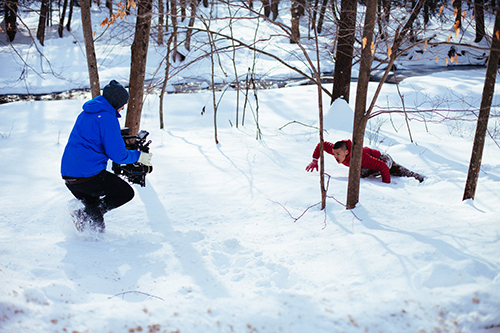 The MōVI was indispensable for creating these smooth, luscious shots in snow that was often too deep to walk through. But it’s a very particular creature: heavy, awkward, and insanely delicate (it can’t be put down on the ground). Which meant everywhere we went, we had to set up a C-stand to pause and re-calibrate. A reasonable price to pay for deliciously smooth footage while tromping through the snow. Most my work is shot with a DSLR, and it was also crucial for us to have the dynamic range of the RED with the sharp winter sun, the brightness of the snow, and the deep shadows in the forest. When it comes to 4K RAW video, I’m officially in love.

In the end, we shot most the winter scenes in four locations. The abundance of snow meant that all the original spots I’d scouted were unreachable. Filming was going well, but I couldn’t let go of the frozen waterfall scene that had been part of the idea from the start. As sunlight began to dip, we realized we could reach a part of the Rondout Creek by walking along parts of the creek that had frozen into an ice shelf. This was our victory moment, and as the clouds rolled in, the team used 200 feet of rope for a makeshift cable-crane. Poised on top of a frozen rock, Dai mustered the energy for a few final backflips before the day was done. 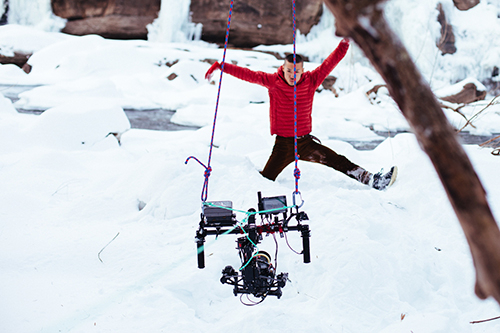 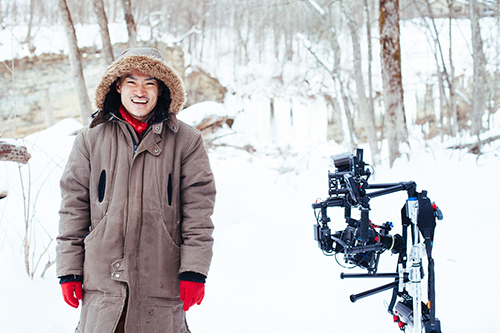 The following day, we drove further upstate to film my father in-law, Dong-Sil, who was the spiritual figure looming over the main character. He was more than happy to be surrounded by plants — one of his primary loves — and look longingly at his wife’s lithographs hanging in the living room. We were treated to an opulent Korean feast and returned to the city to start extensive post-production + color work, which Sam will write about separately. 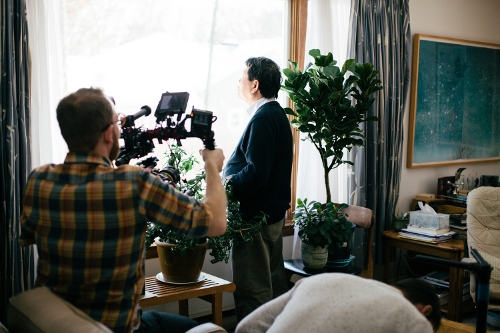