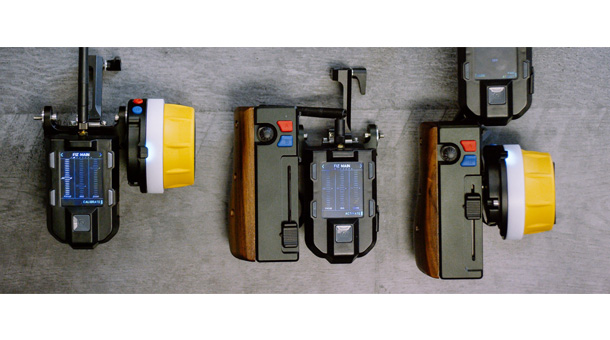 Integrating PILOT
PILOT is the new MōVI and FIZ control ecosystem from Freefly Systems (check out the promo video here). Each component is designed to be split up and recombined, allowing for many different configurations for everyone from single operators to large crews. There are many ways PILOT can be set up, in this post we will explore four configurations. 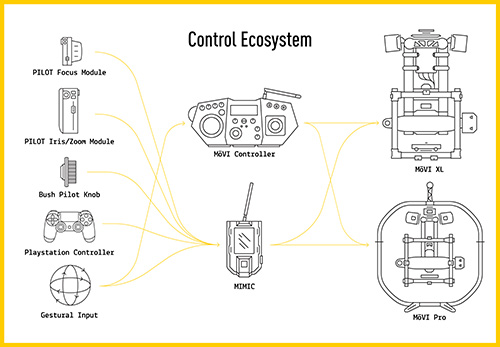 PILOT includes a MIMIC and the two modules — one focus and one for iris/zoom. Part of what makes PILOT so flexible is the fact that each control input can be mapped to multiple outputs. Here is a diagram of all the parts, buttons, knobs, bells, whistles, etc..

We’ve referred to PILOT as a MIMIC on steroids, and that’s a pretty good way to think of it. We’ve used that analogy in part because it’s literally a MIMIC with beefy arms flexing on each side, but also because of its flexibility: almost every control input can be mapped to almost every control output. The following diagram is a simplification but gives you an idea of what we are talking about. 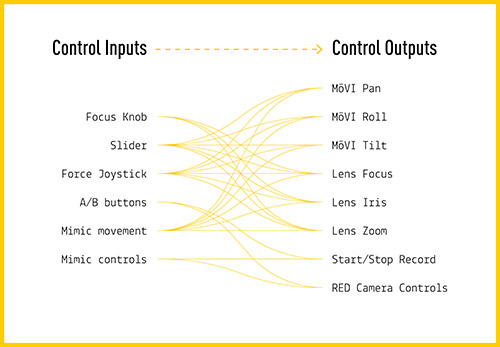 PILOT Configurations
We’ve put together a few configurations that we and early PILOT testers have proven in the field. Read on to get the gritty details on each one.

The One Man Band
This one is great for single operators working in Majestic mode. By attaching one of the PILOT modules to the ring, the user can pull focus, zoom, or even use the force joystick for camera pointing.

What you need:
• MōVI Pro with camera and lens, etc.
• One PILOT Module (either the Focus or the Iris/Zoom Module)
• MIMIC (included in the MōVI Pro Handheld Bundle)
• Lens motor (if controlling one of the F/I/Z axes)
• 30mm Tube to Rosette Adapter

How to do it:
Attach the MIMIC and one of the PILOT modules to your MōVI Pro handlebar and using the MIMIC UI, configure your control input to the lens or MōVI axis you want to control. Use the force joystick to control tilt or map it to both tilt and pan. Pull focus while operating or run any of the lens axes. 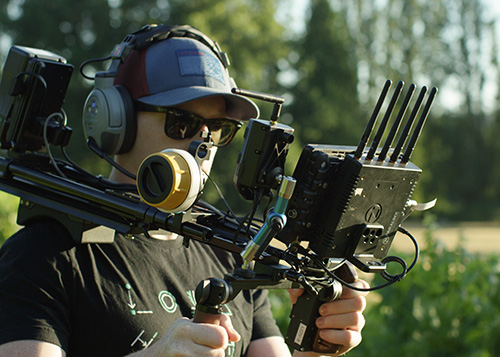 The RPG
We had this setup on display at NAB 2017. With a monitor put right in your face and camera pointing controlled with the intuitive MIMIC, pulling focus while pointing the camera is simple.

How to do it:
It’s tough to prescribe exactly how to set this up. Getting it dialed to your personal liking may require a little experimenting. Once you’re up and running, though, you can execute complex camera and lens moves quickly. 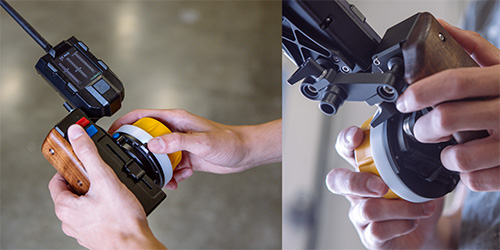 The Fishing Pole
We asked MoVI Operator Chris Herr to put one of our late prototypes through its paces, and he went and ripped out its spine (ahem.. backbone), locked the two halves together, and made a slimmed down hand unit.

How to do it:
Remove the Backbone and join the two PILOT modules together with their included rosettes. You’ll use the Dual Quick Release Mount to put the MIMIC up above the modules.

This is just a primer
With six control inputs and roughly six control outputs, most of which can be mixed and matched, PILOT offers somewhere in the ballpark of 700 configuration permutations. Add in MōVI Pro’s ring, Mimic handlebars, shoulder rigs, rod mounts, rosettes, and that number explodes. The point being: PILOT is pretty damn flexible. The four configurations above hardly scratch the surface. Hopefully, they’ll get you thinking of how you can use PILOT fly low, fast and take some of the hassle out of your workflow.