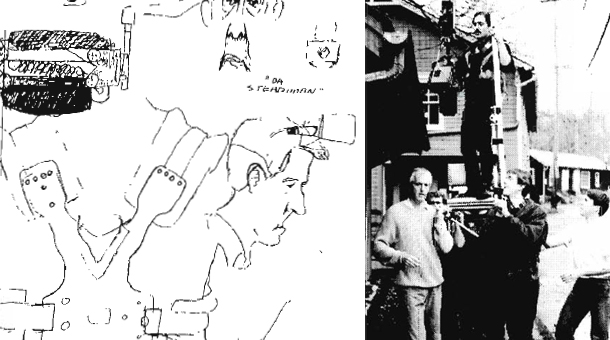 The idea of “Living Masters” began as a joke. I made it up during a TV interview -my mind was wandering (thinking about a Roz Chost cartoon), and when my host started using the phrase as if it was a quasi-religious title, I didn’t have the heart to announce that I was just kidding. But now, of course, I believe! When you see the work that some of the Baghwans are doing -such as Larry’s shots on Untouchables, or Steve St. John’s stuff on Lethal Weapon, it is obvious that an exceedingly high level of skill, taste , judgment, athletic ability, and (what the hell) Art, can be brought to bear with our instrument. With or without screen credit, on film after film all over the world, great shots keep appearing. Frequently we have no idea who did the operating, just that a master hand was at work. Now, at last, a good number of LM’s will have a chance to spend a week together, sharing information accumulated for a decade or more, without the distraction of having to teach beginners.

The first-ever Masters Workshop takes place June 5-11, at Rockport, Maine. It has been sold-out since a week after its announcement. I confess that I’m quite excited about it myself. It’s not just a reunion and picnic, although there will be a lot of that. It’s a chance to really work on the State-of-the-Art in a big way. If we can sustain the energy required, we will leave Rockport with a collective upgrade in our level of skill and knowledge. (And, of course, with the hot sweatshirt of 1988!) 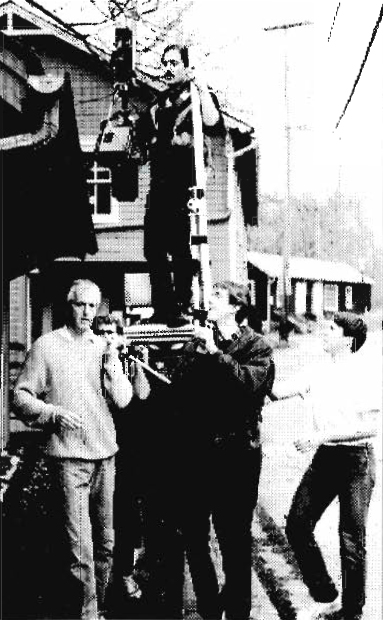 There is lots of new material to consider including gadgets, tips, techniques, etc., some known only to a few of us, which this meeting will help disseminate (as will our reports in the next issue of the Letter). We have arranged for several provocative lectures, live and on tape, including one from Vittorio Storaro and one from our new columnist on advertising and promotion, Victor Sonder. I have some interesting information and a couple of new gadgets and tricks, any one of which could turn out to be worth the price of admission, For instance, I think that I can finally define the matter of trimming the camera (see the article in this issue), as a result of my experiments with the mini-physics of the “Steadicam Jr. ” project. In addition, I will offer some “human-powered” vehicle shot options that are hilarious and truly useful for some spectacular shots, as well as being great fun for you and your squad of “grips.”

It occurred to me that a Steadicam is the only camera that could benefit from being transported by “hand”, after the manner of the old sedan chairs, or palanquin-type pharoah-carrying devices. It is also the most appropriate method of operating for aged LM’s. During a recent workshop at St. Peters, PA, we made the first experiments to find out how frightening this all might be. Our intrepid operators were transported, standing upright, on a platform carried at shoulder height by six or eight people. We found that, if you have any kind of hand rail to hold on to, it is absurdly easy. The momentary angle of your “platform” might vary by a few degrees as your “carriers” run along, but they are certainly strong enough to counter any tendency you might have to lose your balance, and the important thing is, of course, that they have legs! They can navigate rough terrain, and if one or two fall down – well there are lots left! You operate one-handed, holding onto the railing, and of course the Steadicam takes care of the angular variations the platform. I believe that one can easily approach and step onto a 4×4 plywood sheet which is braced and is equipped with carrying poles and a railing to hold onto. This contraption (which can be easily knocked together anywhere in the world), can be lifted into the air immediately by the “grips”, and transported at anything up to jogging speed – over to a second – floor window, for instance, or up to a wall that you can then step onto, etc. these are some of the lunatic and exciting possibilities which we will explore in Maine. Think of it – even for a shot which requires a momentarily high lens height when you happen to be in lo – mode, or a shot which just requires freedom from navigating , in order to concentrate on framing. Isn’t it possible that the film business, which has always been so reactionary, just might be ready for this great leap backward? Parchment at eleven!

WHAT’S A “MASTER”?
At the “Masters”, as you will read elsewhere in this issue, we wish to explore the possibility of some uniform “School-Figure-type” exercises which may ultimately provide a positive method for rating Steadicam skills. In the meantime, I would like to offer some help with the self-rated “experience” category in the Steadicam Database. The Database already has clients who are seeking operators of all degrees of skill, since their shots vary in difficulty, and their budgets vary in size. Sure, everybody wants a master, but they are often not willing to pay the vast sums required, and often the work isn’t difficult enough to justify the presence of one of these august persons. 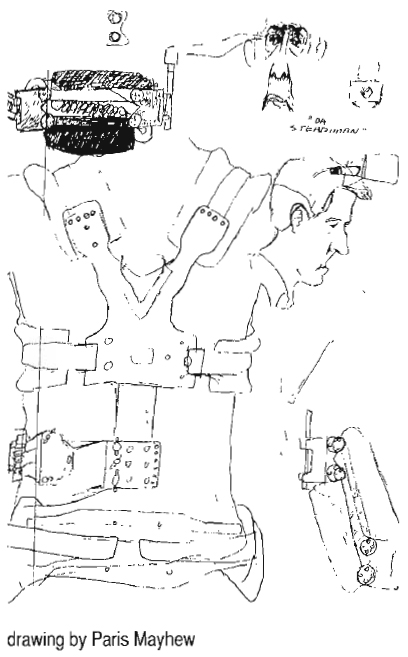 I think you should approach this idea of rating yourself with caution. It is tempting to give yourself a “ten” in order to get more work, but, as for a airplane pilot, it could be dangerous for future business to be over-rated. You’ve got to be able to live up to your billing. Miraculously, I have found that 99 % of Database experience ratings agree quite closely with what I may know of most operators qualifications. A few I have actually suggested be raised! Some other exceptions are so ridiculous as to make one think that the respondent misunderstood the question, putting down, for instance, their overall experience in the business, instead of their Steadicam experience, etc. Anyway, here are some brief guidelines. Please take this in the right spirit. We are merely trying to help make the “experience” column more uniform and useful. It can be an objective resource, which will serve both you and your clients, in the same way that the rating of a pilot in terms of hours, instruments, multi-engines, etc. offers some clue to his employers just what they can expect. Here goes : (The titles are still a joke.)

10. Living Master -Years of experience -Big Features, Name Directors, Big Stars. All formats -anamorphic speaks the language with everybody from focus-pullers to craft service. Usually owner-operator with lots of gear. Comfortable on sets anywhere in the world, hip to carnets, unfazed by virtually any challenge offered for Steadicam – confident, including with wheels and conventional operating as well. At the highest levels, can take over lighting and/or directing certain second-unit situations without a beat. Designer of the best shots . (If I could write like Churchill, this piece would already have slipped into the absurd …but you get the point).

9. Sub-Master -Same as above, hundreds of hours experience on features, etc., but sometimes still nervous in customs. Could maybe have something more to learn about (pick one) a. Technovision, b. foreign adaptor plugs, c. black market currency exchange – otherwise is indistinguishable from a 10.

8. Ace -Has solid feature and/or high end video experience. Form and technical skills near-perfect. Confidence high, ready for any opportunity, just got a fax machine, still learning about the politics of movie-making.

7. Expert -Has some feature credits. Successful shots in a variety of formats, Excellent form and skills. Owns or has access to good accessory package, or is hot Panaglide customer.

6. Pro -Some good professional shooting. Tries the hard shots -not totally in control of the instrument for every-take-every-time, but can usually get the shot. Has a good reel, but maybe from obscure productions.

5. Journeyman (or part timer) Attempts and gets shots within range of skill. Has aced at least one workshop. Has good form. Sort of understands trim and set-up. Has beginnings of a reel.

4. Novice -Just getting started. Form ok, skills ok. Looking for connections for equipment purchase or rental. Has tried it out on low-pressure-type productions for self or friends, has gotten nice shots.

3. Beginner -Just finished a workshop. Knows basically how to do it.

2. Hurtsyourback -Dabbler. Tried it at the rental house. Hasn’t got a clue .

1. Invertebrate -Heard about it, thinks it uses a gyro.

I would like to put a discussion of the experience ratings on the agenda of the Masters tournament. We should decide whether it is a good idea to distribute these definitions along with the Database print-outs. While we’re at it, we will also discuss which categories of information we should give out, and how many operators, minimum should be proposed, and what about the potential conflict-of interest if Jerry or I are among the candidates.