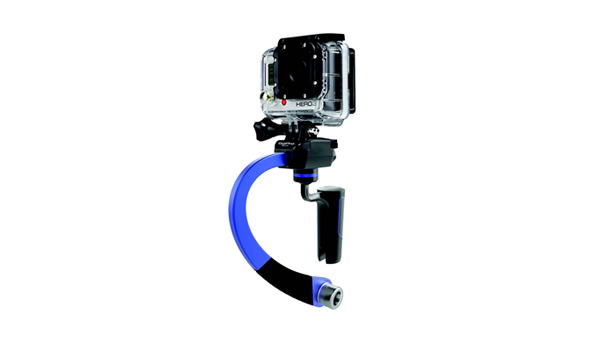 Las Vegas, NV – April 8, 2013 – The Tiffen Company, a leading manufacturer of award-winning accessories for the still imaging, video, motion picture and broadcast markets, is demonstrating to the public for the first time the brand new Steadicam Curve for GoPro® HERO at the National Association of Broadcasters (NAB) Show, held in Las Vegas from April 8-11 (Booth C8818). Representing decades of Steadicam R&D ingenuity, the new Steadicam Curve for GoPro HERO is a stealth camera stabilizing system engineered for the rigors of extreme sports and events. Compact enough to fit in your back pocket, the new Steadicam Curve weighs a mere 1/2 lb. with an ergonomic design for one-handed, smooth video capture, ideal for GoPro users on the move. “Steadicam is synonymous with action, so engineering a system that keeps pace with the intensity of GoPro users was a natural step in the progression of the Steadicam product line,” says Steve Tiffen, President and CEO, The Tiffen Company. “GoPro shooters have given the world some of the most amazing footage. We look forward with even greater anticipation to watching those jaw-dropping moments with that extra bit of cinematic flare thanks to the new Steadicam Curve.”

Steadicam Curve availability and pricing will be announced soon.