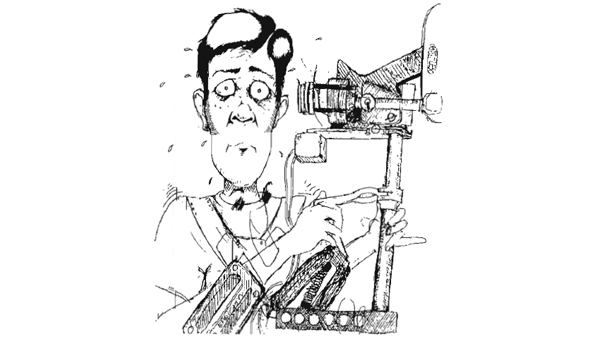 To get a sense of how good we are technically as operators and how we compare to others, we’ve been thinking that the Association members should develop a series of six to eight school figures, with clearly defined and repeatable parameters. An operator anywhere in the world should be able to perform these figures, tape the result, and discover how he or she compares to the rest of the world.

The figures will be designed as a group to test all known technical operating skills. A tape of the figures could be sent to a panel for review. Additionally, another tape could be made to illustrate the style of the operator as the school figures are performed .

The figures should be quite difficult… Below are some suggestions to get the process rolling and provide a chance to sharpen your skills.

This school figure should be familiar to anyone who has participated in recent workshops: Walking the line, or the Line Dance. The camera, with a long lens, faces in one direction, aimed at a target, and moves towards and away from the target along a line. The operator, with style and grace, walks forward and shoots forward (Missionary position) approaching the target, locks off, begins to move away from the target , changes to walk forward, shoot back (Don Juan), comes the end of the line, locks off in the Don Juan, moves the camera forward, changes to the Missionary, etc. This is repeated ad fatigum.

One can increase the degree of difficulty by adding boxes approximately 8″ high along the line that the operator must climb on and off of, while still keeping the target centered … and/or adding a rising string to follow (boom along).

Another possible figure involves the use of two targets, and is not for the faint of heart. The lens is locked in extreme telephoto (l20 mm or so in 16 mm). The operator, in Missionary position, carefully trims his rig to a cross hair (tape on a window) approximately 5 meters away from the operator. A second object, at least 40 meters away, is locked on the cross hair. The lens is now locked on a single line or ray. As the operator moves slowly forward , any deviation from this ray will become instantly apparent and frustrating to correct. (In S.F. #1, you can deviate from a single ray as you move along but still keep the single target centered on the green screen by panning, tilting, and/ or booming). Those of you who like to weep can incorporate this into figure #1 and SOME of the options.

This move is simple. Just walk by an object that faces 90° to the lens’ line of travel. The object should be level with the highest boom height available. Start with the object at the extreme right hand side of the frame . Control your pan and boom so that the object is continuously moved from one side of the frame to the other. As you pass closest to the object, it should be in full frame, centered. It should not appear to move backwards in its travel across the screen. Simple enough . Try it in low mode. Add boxes. Create blind spots where you momentarily can’t see the object…

This figure lacks grace, but needs a carefully balanced rig. Place two targets about 20 feet apart, facing each other. Stand between them. Whip pan from one to the other as rapidly as possible, coming to a full stop with each target centered, of course, at the end of the pan. Do it first by “making a change,” (your body not moving), then try the whip pan by moving your whole body 180°, remaining in the missionary position (aka the Sumo pan). If it sounds too easy, up the mm’s and do it blindfolded… or perhaps with the monitor turned off…

That Churchill Figure. Remembered from the old days at the Opera House in Rockport… Ted trying to remain focused and intense as we spun the camera around while pointing at some spot on the ceiling… There was also a look into a garbage can as part of the move, and a change of the pipe from one side of the mouth to the other to clear the rear mags. Herein, simplified. Go to a church with a high ceiling and some sort of mark up there that you can identify and lock on to. Spin around it two times , then continue to turn and drop the lens to horizontal in two more revolutions to a predetermined frame , such as the exit. Arrive gently at this frame and lock it off. Options under consideration include synagogues, office lobbies, museums (the Guggenheim is great if you can get it), and, of course, small opera houses in remote villages. Doing this pointing up at trees may be more aesthetically pleasing but is considered cheating.