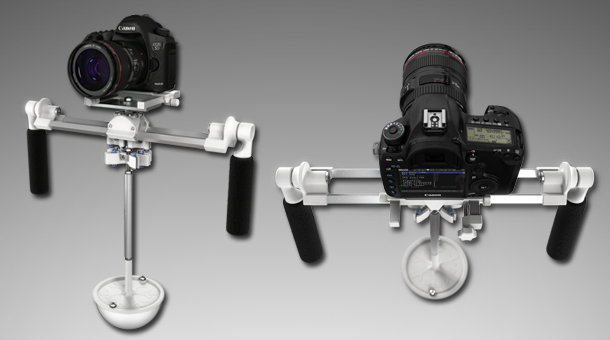 No “white” Christmas in your region of the world this year? Albeit its catchy name not even this camera stabilizer can offer comfort, but it can make your shots more stable. Snow is advertised as the first “mechnical 3-axis gimbal”.

When taking a closer look it becomes clear that Snow has nothing to do with Christmas and is also not a “gimbal stabilizer” in the usual sense, but rather a steadicam with a new and interesting approach of operation that has apparently been inspired by brushless gimbal stabilizer systems.

One thing that is clearly different to other steadicams is that the counterweight is a tank filled with water. On their website the manufacturer explains the effect like this:

“In the swinging tank the damped flowing fluid changes the center of gravity while forces the rig to stay vertical.”

Looking at the video that shows off the benefits in comparison to a normal counterweight, the idea becomes more clear. On the other hand everyone who has used a normal steadicam knows that it would stop swinging just as quickly as the water tank version, which makes the video a little misleading or questionable at least.

Anyway. The approach to operate the device looks like a good idea as it seems controlling the camera stabilizer is easier than a normal steadicam, which is one of the major benefits of electronic brushless gimbal systems.

The device is targeted at “indie shooters” and available for $550 for early birds and if it delivers the promised benefits this seems like an good price comparable to other affordable steadicam systems.

Watch the full video below to find out all the benefits of the Snow camera stabilizer.

The Indiegogo campaign just went live and their goal of $15,000 doesn’t seem to hard to reach. The Snow camera stabilizer is estimated to start shipping in February of 2016.