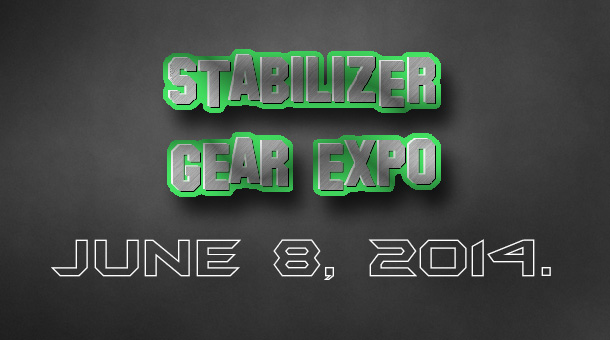 ““The Stabilizer Gear Expo: Manufacturers of the leading body-worn camera stabilizers and stabilizer accessories, come together in one place to demo their products to film and video industry professionals.”

The idea behind the expo came about several years ago at a Steadicam Guild gathering. Dan Kneece, Steadicam Guild founder, and I were discussing gear and my interest in upgrading my system. Since most of the major Stabilizer companies except for one, XCS, attend other Expo shows, I thought putting on an event that compared rigs and accessories might be a great event for Steadicam Guild members as well as manufacturers. It wasn’t,however, until a few years later, Charles Papert came up with an idea to compare Steadicam monitors in direct sunlight. His event, ” The Great Daylight Monitor Shootout” was a hit. Many operators showed and it was an excellent way for potential buyers to compare the monitors. This shootout rekindled the idea of getting the major stabilizer and accessory companies together in one place to show their gear to members of the Steadicam Guild.

The big hurdle was finding a place to have the expo. Member Jessica Lopez secured the location for the Expo. The Casting Office Bar and Grill in Universal City, California proved to be an interesting location for the first “experiment” The connected parking garage gave us room to have fun with Steadicam dollies and rickshaws. The bar and grill itself was just big enough for the number of vendors that we had.

If we were to have another expo and more vendors, the following year, we would have to find a bigger venue.Thinking of other possible places to hold the expo, I remembered Aiken Wiess, SOC came up with the idea of a SOC Swap meet which was held in the parking lot of Filmtools in Burbank, California. I thought that would be a perfect location so we contacted Stan McClain, Owner of Filmtools and he agreed to let us use their parking lot. Filmtools has been the Major sponsor of the Stabilizer Gear Expo ever since.

This will be the 5th year for the Expo and the 4th year at Filmtools.

The Stabilizer Gear Expo has been a great fundraiser source for the Steadicam Guild.

We are looking forward to another great year with even more exhibitors at the Stabilizer Gear Expo.
If you would like to be an exhibitor and or sponsor, please visit our website www.StabilizerGearExpo.com