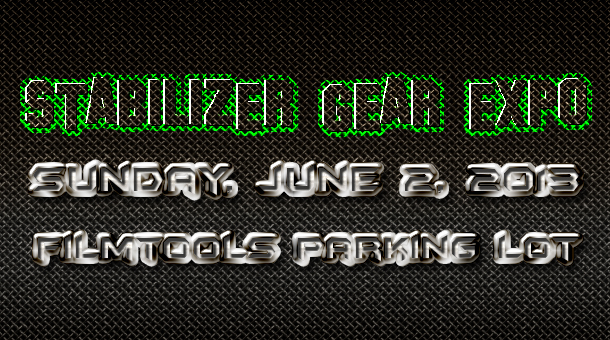 “The Stabilizer Gear Expo: Manufacturers of the leading body-worn camera stabilizers and stabilizer accessories, come together in one place to demo their products to film and video industry professionals.”

The idea behind the expo came about several years ago when I was looking to upgrade my own Steadicam. All the major Stabilizer companies except for one, XCS, exhibit at the other equipment Expos.

I had heard great things about XCS so I wanted to compare that system with the other stabilizer systems. It was then I thought that some sort of event could be put on to not only compare stabilizer rigs but also stabilizer accessories. A one stop browsing experience just for Steadicam operators.

I had thought about it over the years from time to time but as with life we get busy with other things so I put it on the back burner until another source rekindled the idea of a Stabilizer Gear Expo. Charles Papert came up with an idea for comparing Steadicam style monitors in direct sunlight. That event had a good turn out and I thought my event might be doable. Of course there was the logistics of cost and where to hold the event.

The Stabilizer Gear Expo was first held at the Casting Office Bar and Grill in Universal City, California. The connected parking garage gave us room to have fun with Steadicam dollies and rickshaws but the bar and grill itself was a little on the cramped side so I decided that we would need a bigger place if we were to have another Expo.

The SOC (Society of Camera Operators), an organization I am a member of, once held a Swap Meet in the Filmtools parking lot so I thought that might give us enough room to hold the Expo. We contacted Filmtools, they liked the idea and it has worked out great ever since.

This is our third year at Filmtools and they’ve been fantastic and very accommodating. They went so far as to have power outlets installed on the side of their building so our exhibitors can power monitors and charge batteries.

I would like these companies to sign up as early as possible so I’m offering an extreme discount that goes through the end of this month.

We are looking forward to another great year with even more exhibitors at the Stabilizer Gear Expo.