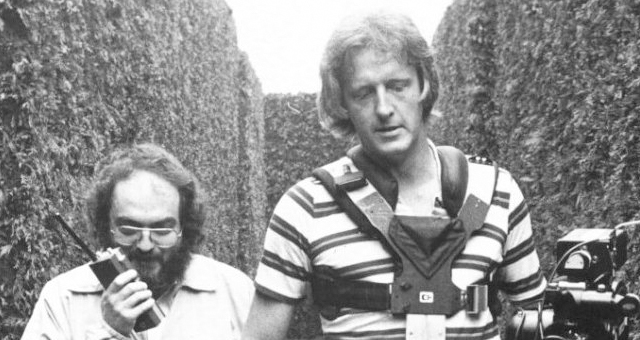 The Steadicam was conceived as a stunt camera, designed for running shots over rough ground, but by the time of its feature debut in 1975, we were beginning to realize that we had underestimated its potential. My first feature shot was a long, slow quiet track with David Carradine on Bound for Glory, and the history of the device ever since has been a steady progression which has tended toward precision and away from all those pell mell stunt running shots up stairs!

The emphasis for the last few years had been on Steadicam’s development as a reliable shotmaking tool which can operate not only with the apparent accuracy and smoothness of the dolly, but also with the ability to make subtle moves that curve in three dimensions beyond the scope of jib arms and rails… Yes, friends, all of the above, plus the gut sensitivity and “feel” of the handheld camera! (but without that annoying “chatter” and vibration caused frequently by the less-than-rigid connection of camera, head, risers, dolly etc.)… Needless to say, both operating technique and equipment have come a long way, for today’s so-called “Living Masters”to routinely deliver this kind of work.

Of course a simple dolly shot can be made by a relatively inexperienced crew and can turn out quite acceptably, whereas even a simple Steadicam shot can be a disaster if the operator isn’t familiar with the equipment. Sad to say, great Steadicam shots, which are increasingly prevalent in todays films, tend to disappear into the fabric of the picture, while bad, or even OK Steadicam shots stick out at you and ring the old gong. It’s a tool that definitely requires skill and practice, not to mention that you should be good camera operator to start with.

So, now, what are some good opportunities for Steadicam? Keep in mind – It moves smoothly, it can be accelerated rapidly, it is “hand held” so it can safely come close to things, it is highly inert in pan and especially tilt, it eliminates vibrations, it can be “worn” or “hard mounted” etc., and it requires skill!

Steadicam is good for:
– moving camera shots in tight quarters, (particularly for complex stuff such as: guy passes camera in a hallway, Steadicam backs up, booms up rapidly, arcs into unseen doorway, pans, arcs back out into hall, booms down, tracks along, stops… etc., yet it feels like we “watched” a guy pass by);

– shots over rough ground, particularly where one needs to look straight ahead or behind;

– where one needs to continue on beyond the practical distance that can be accommodated with track;

– where one wishes a shot to cross a threshold, or continue up some steps, where a cut would otherwise be necessary;

– where any other technique for moving the camera would be impractical for external reasons, such as the load-bearing abilities of the floor or the rigidity of a dock or bridge, etc.;

– for any moving camera shot where the quality of the move contributes to the emotional qualities of the scene, such as the”hardness”of accelerations/decelerations, pans, etc., and the momentary control over the balanced/unbalanced nature of the composition as actors enter or are let out of the frame;

– where we wish to simulate vehicle motion within a set that doesn’t move (such as the work in the airplane set in Twilight Zone!;

– where we wish to provide the effect of a zoom lens of much greater range than any available, by moving toward or away from a subject (perhaps while zooming slightly);

– for human or animal (or alien) points of view, that move through the world realistically, but don’t shake unrealistically;

– quick static shots with simple set ups, where time is a factor – such as during a sunset, or in the middle of a series of Steadicam shots, where changing cameras and bringing in a dolly would be an unnecessary waste of effort;

– where unpredictable events preclude marks – like shooting dogs and kids and non-actors and rainbows!

– or for various extremely technical shot requirements, such as certain kinds of optical plates, or shots that need to pan around diverse axes, such as five feet behind the lens, or three feet in front, or right on the old nodal point of the lens, etc.

– static shots of long focal lengths. (It is possible, but no particular treat, for a Steadicam operator to hold an entirely still frame out to about 100mm(35mm format), but this only makes sense if it is at the beginning or end of a Steadicam move.);

– ultra-violent actions with running, etc. (Why risk falling or crashing with a $70,000 rig plus camera? This kind of thing is perfect for ~shaky-cams” and pogo cams” that don’t have to be rock steady, and that mostly don’t need video viewfinding);

– quick pans with instantaneous lockoffs. (This can be murder, even on a tripod, because of the view-finding problem, and it’s perhaps best done on a geared head. However Steadicam is getting to be a close second. We regularly teach the technique, but even a top gun will still blow one take in three. It helps if we can decelerate the pan to lock-off.) Rapid tilts are even more difficult – that is the most inert axis of Steadicam;

– Steadicam hard mounts should be subjected to no more than one-foot bumps while “soft mount” – wearing it with legs bent – can be effective in up to two-foot bumps, but the operator must have room to work and a secure way to be held onto the vehicle.) Again, shaky-cam is great for stunt vehicle shots, including skates, because if you fall, at least you aren’t welded to it and can toss it away;

– or for any shots which can be easily and perfectly executed on the dolly. Why carry it if it can ride just as well!

The above is extracted from the Model 3A operation and maintenance manual (with permission). Although all of the above still holds true, it is this operator’s opinion that in terms of it’s creative use and versatility, the use of Steadicam has advanced even further. This is in part due to the fact that it has now been manufactured and in use for over 18 years.

Over that time Steadicam use has seen a strong and “steadi” growth in popularity. As a matter of fact, Steadicam has never been more popular, especially with it’s use on such popular television shows as “ER”. It is not uncommon for a television series to have a Steadicam® and operator on staff for complete season. Shows such as “High Incident”, “JAG”, “Promised Land” “The Profiler”, “Marshal Law” all have a Steadicam® available at all times

Along with this is increase in popularity, the high level of work to be expected from a good Steadicam operator has also risen. This is partly because of the incredible talents of some of the top end Ops working in the field.

What was not considered a Steadicam® shot a few years ago is now executed routinely. Something that can be done on dance floor (say a master shot) is routinely executed on Steadicam®, especially in the world of episodic work and MOW’s. Whether it is done for speed or creative reasons, Steadicam® is used for more then you think, you just don’t notice it.

In the beginning Steadicam was a speciality item, used the majority of the time for a specific shot. How could it not be the camera had never been able to move more freely. The Steadicam operator would come in a execute a specific shot or sequence for the day(s) and go home. Eventually as directors and cameramen (& women) discovered what Steadicam® was capable of it became more apparent that this was a very unique film making tool. Good directors and D/P know what it can do and just as important what it can not.

Bigger budget features were the first to carry a Steadicam® and/or operation for the length of the production. Part of the reasoning being if you have to hire an additional camera operator (commonly referred to as “B” camera) one might as well hire a Steadicam® operator who could conventionally operate also. If one wanted to do a Steadicam® shot it was available anytime, provided the financial details had been worked out. 😉

Nowadays, Steadicam is more common than not on a movie set.

General concept of how a Steadicam® works The Steadicam is fairly simple in concept. What’s more amazing is that someone actually thought of it. (We all know who that is, don’t we???)

The mechanical arm used in a Steadicam utilizes a series of springs to counteract the weight of the Steadicam sled and camera assembly. The springs are adjustable (by stretching or letting the springs contract) for the differing weight of various camera combinations. The arm is generally adjusted to a middle point of its’ up & down “booming” range. It has adjustments at the base of the arm, where it attaches to the operator’s vest, for neutralizing left/right pulling of the sled assembly based on the operator’s personal posture or shot requirements. In other words, so it doesn’t pull the operator one way or the other. The idea is to be as comfortable as possible and not fight the rig, there are many other fights to be fought including headroom, C-stands and lights in frame.

The arm attaches to the vest via an interface that incorporates personal adjustments for the front / back (away / toward) movement, similar to the left/right thing mentioned above, except these adjustments are on the vest. The vest manages to distribute the weight of the camera over the operators upper body. However after a long day one does tend to feel the weight of the camera and sled (sometimes close to 85lbs) on your lower back and shoulders.

Another concept that is equally, if not more important is the gimbal. Without (at least trying not to) getting too complicated here the center post of the Steadicam Sled – the post the gimbal is on, moves the balancing point of the camera (center of gravity or C of G) outside of the camera body and to a point where it can be manipulated or controlled. This is done via a counterweight – the monitor & battery assembly. For instance, when the camera is handheld the film plane(or tapeplane) is moving with the C of G within the camera, hence the jerkiness of the image recorded. Whereas with a Steadicam the C of G is moved outside of the camera and a free floating gimbal is used at the newly created C of G to smoothly adjust the camera from it’s new C of G. The resulting image movement (shakiness) is less noticeable because the camera more or less pivots/rotates around the C of G. Add to this smooth panning & tilting the shock absorbing capabilities of the the arm and you get the silky smooth shots of a Steadicam®.

The Oscar & Emmy for Steadicam

In the 18 years (YES! that’s right 20 years!) Steadicam® has been around, this invention has worked its magic on thousands of fllms and TV shows. Steadicam’s impact was so profound that in 1978 the Academy of Motion Picture Arts and Sciences awarded its inventor, Garrett Brown, and its developer, Cinema Products, an Oscar for outstanding technical achievement. In 1989, the Academy of Television Arts and Sciences followed suit and Steadicam’s designers also earned the coveted Emmy.

Today, Steadicam is an essential tool for professional film and television production throughout the world.