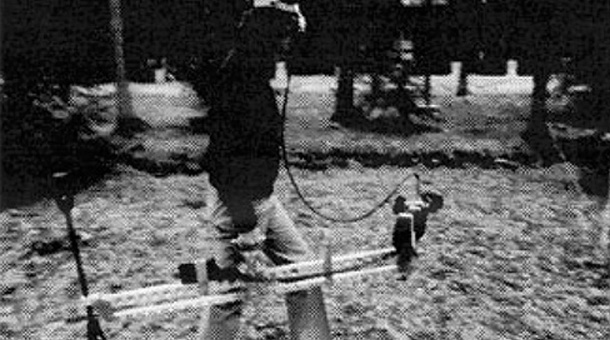 That’s what I wanted to call it. It wasn’t just ego (that came later!). I thought it needed a simple, honest, „70’s“ kind of natural name, a pure name, not a stupid, gimmicky name like „Steadicam.“ It was Ed DiGiulio’s suggestion, which I hated immediately. Of course, as he predicted, the word has now become simply a word, a noble word, meaning exactly what it says, and in fact, I am daily (well, yearly…), grateful that he prevailed and that we didn’t call it the bloody Brown Stabilizer!

In any event, I recently uncarthed some early pictures, and have been inspired to relate one-and-only true version of the birth of our noble gadget. So here it is: the truth du jour, supplanting any and all spurious memoirs, dubious interviews, doubtful brochures, and slick video-magazine segments…

In 1929, Lee (Vacuum Tube) DeForest patented using a vacuum to silence a movie camera in a bell jar. This item popped up 41 years later in my very first patent search and squashed my first „invention“, a vacuum-blimp for the Arriflex Ilc, With hindsight, I should have persevered, since it would have weighed about five pounds, and might even today be better than lugging a BL-IV around, however…

I rebounded to another problem how to improve the look my handheld shooting. I had mounted a camera on a long pole rig slung below a helicopter for shooting into the windows of moving Subarus. It was surprisingly stable, except in pan (the axis around the pole), I was intrigued and built a long „t-bar“ rig of plumbing pipe, which was stable in all directions as one ran around the countryside. It was clumsy and rolled a lot, but the footage looked surprisingly good, I suppose if I had been satisfied with this gadget (which gets re-invented from time to time in this business, e.g. „shaki-cam“ and „pogo cam“), the project would have ultimately fizzled, but I couldn’t quite leave it alone. In the spring of 1973 the „pole“ as it was still known, was rebuilt as a parallelogram mini-crane, and my ACL acquired a fiber-optics viewfinder in order to secretly shoot a commercial for Connecticut Natural Gas.

It almost didn’t get finished in time. My basement-type machinist, when asked to drill the last few holes, came out with a line which we still use: „I can’t stay up, I have to supervise men tomorrow!“ Needless to say, this guy never worked again in the „brown stabilizer“ business… We ended up at 3 a.m. in Bridgeport, Connecticut in a vast old railway machine shop, with the owner himself trying to remember how to operate his locomotive lathe in order to make us the last few dinky parts.

It worked, better than earlier ones, and the camera stayed level as one boomed up and down, but carrying it was a big strain on the old hand. We hired the biggest, strongest cameramen in the land and sent them all home in a pillowcase after a day with the „Pole Rig“! So I built a body support which floated the whole contraption on the end of a nine-foot bunji cord running through yacht pulleys, and which provided my first taste for vanquishing Hooke’s law, as to the „rate“ of suspension systems.

The contraption was as slick, in this regard, as our present-day arm, but applied all of its massive torque to the what doctors call „that“ muscle in the operator’s right shoulder. By now it employed a Kenyon gyro stabilizer and battery in place of the t-bar and weight, so you can imagine how excessive was its stability, and how impressive was the impact of seeing an operator looming around a comer carrying the Lusitania suspended from „that“ muscle, fiber-optic bundle pressed against one eye, head tilted upward in a vain attempt to body-english some tilt into the shot, groaning weakly, vertebrae shifting’ like tiddly-winks…

It was beginning to sink in that this device might not be what the motion-picture industry was waiting for. I loved the results and knew that I was the only one in the world who could make such shots, yet it was also clear that none but crazed obsessives would endure using this contraption. We were shooting amazing commercials, with clients and crew signing agreements-of-secrecy. I had fabulous demo reels in 16mm and both Panavision and Cinema Products were interested, but both said they wanted to see a demo in 35mm (Oy!).

All the spar dough from my commercial-production company ended up in little machine shops, and did they ever see me coming! For example, in an attempt to make the camera pan and tilt independently, I had strayed into the scary world of „grade-14“ worm gears, cut and fitted to impossible tolerances, in order to avoid backlash when my web of Berg belts was cranked from the handle. The last of this series of finer and finer worm gears cost five thousand dollars to fit, and was the knock-out punch for the „pole“. Despite having a patent application ready to file, I abandoned the whole notion. The principles were sound, but it was too big, too heavy, too complex – a turkey.

I was desperate now to find a commercially viable answer and recover my investment. I have told interviewers that in the spring of 1973 I twice checked into motels for week long marathons of thinking-with-no-distractions (except frequent room-service), and this much is true, however the story about scaring the maids by running up and down the corridors with borrowed mop handles is exaggerated. Mild amusement was the general reaction. But they did sit around and talk about it: „The boy better watch that trim – it’ll precess if he even tries a whip pan!“ 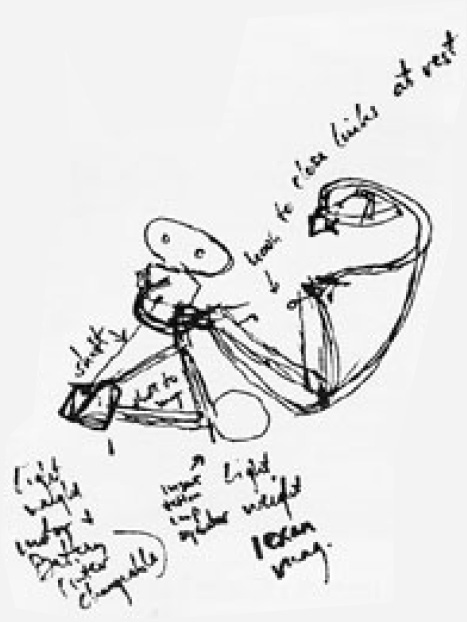 Eventually I got it. The hardest part was giving up features – like the camera’s ability to boom from floor to ceiling (I still think about how to get the present Steadicam to go from high to low mode while shooting). The requirements for a successful device were clear – lists 1 made at the time indicate it needed: „remote reflex viewing, isolated suspension (from vertical, horizontal and angular motions), minimum extra weight, close operation to the body, „float-with human servo-mech damping, 300 degree pan, 100 degree tilt, and zoom to 150mm.“

Range of lens heights: „knees to above head, minimum: waist to head“. But which actual mechanism, which combination of devices would be good enough, yet light enough to add on to the weight of 35mm cameras? It was a chess problem. I had to work my way through a lot of craziness and separate the blue-sky notions from the good ideas. I have sketches and notes on motel stationary that read: „Try connecting pan and tilt to your head“ (what?), „tray spar extending, down from camera except will hit ground on low shots and weight will be too far forward“ (no kidding!), „foam protection for when falling down!“, „Try using more than one person!“ (never pursued this until 1988!!), „Try: flexing parallelograms (?), air bubbles floating in egg-shaped containers of oil“ (I have no idea what I had in mind here!), „…how about electronic leveling servos, radar referencing, hydraulic pistons, radar reflectors, etc. (??) Quite a grab bag! How did I ever miss atomic fusion leveling?“

Although I personally gained about 20 pounds via room service, I did finally emerge with „The Invention“. I had a model of the arm, made with parts from a couple of parallelogram desk lamps, and a sketch of the absolute minimum configuration for mounting the camera, battery, magazine and motor. I believed it would work well for last moving shots, but doubted it would ever give the dolly much competition for precision (remember, I was used to version with the inertia of the Chrysler Building). At worst, I thought it could be simpler, smaller and lighter and therefore had a chance to be sold, so I decided to build one final version.

American Optical Corporation gave me a good fiber-optic viewfinder, and Dick Defrenes fitted it to my Africa-Corps Arri-Iia. A retired machinist named Jack Hauser constructed the prototype and we had the thing ready to test within about two months. 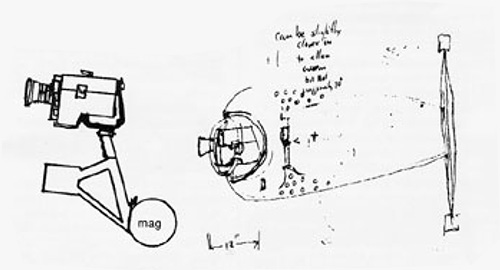 Early obession with flying the new Panaflex led to some odd designs, some with displaced magazines, some with no magazines at all!

It seemed quite promising, although it needed a bit of practice (!) I set out to make a final demo and had a job lined up on which to try it – an Arnold Palmer sweater commercial, to be shot on a golf course in Latrobe Pa. At the last minute, Palmer’s manager notified us that he wouldn’t let Arnie sign any kind of agreement-of-secrecy, so we used a tripod for the shoot, and crept out onto the course again at twilight to shoot the last few shots for the demo. I had a suspicion that the footage might be great, but my Lab account with Deluxe General in New York was stopped two days later because of unpaid bills. I had an appointment with DiGiulio, a plane ticket bought on credit, and no dough to process the film. I went to L.A. anyway, in the hope that Deluxe in Hollywood had not yet been notified I was a deadbeat. I walked in to the lab only to find that they would not release either the negative or the print. My clothes were threadbare. I hadn’t eaten for a week….. (HOLD IT! – there is serious doubt about this part. Maybe my lab account wasn’t closed. Maybe I made this up in some interview, but so what? It doesn’t matter – it’s still plenty exciting!) Anyway, I don’t want to cast doubts on any other parts of the story, so I’ll check it out and report back, OK?