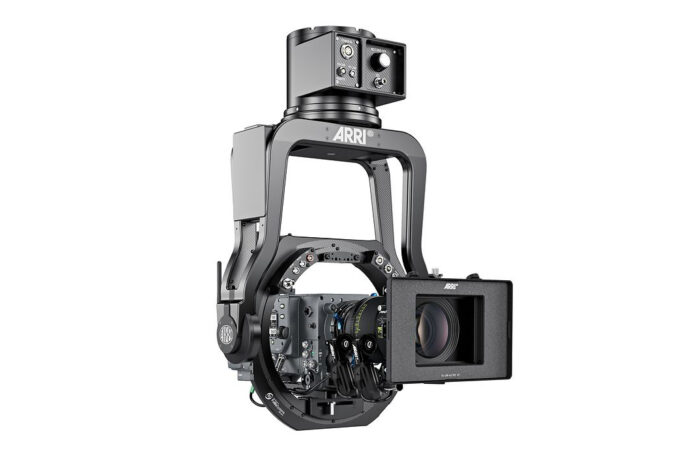 Stabilizing heads open a world of creativity for filmmakers. ARRI has a new 3-axis stabilizing remote head that adds a new spin. Literally. The SRH-360 has a brand new slip ring that provides unlimited rotation on its pan axis, allowing it to rotate 360° freely.

The SRH-360 is an improved version of the SRH-3, but the latter is still very capable, especially if 360° rotation is unnecessary. On top of the new pan axis feature, ARRI has improved the torque of the pan motor, increasing it to 50% when compared to the SRH-3. The increase in power will improve high-speed camera moves and operators should see better performance under windy conditions.

Both stabilizing heads offer payload support up to 66 lbs. (30 kg), so it should cover the majority of cameras, including the 46-lb. IMAX MKII LW. Director Christoper Nolan opts to use the IMAX MSM 908, which offers 3 1/2 minutes of runtime but weighs 52 lbs. After adding accessories and the mag, you’re gonna need a bigger boat. Something like the Lev Head from Ultimate Arm.

Like its predecessor, the SRH-360 provides LBUS-based control, making it compatible with ARRI accessories, including the DRW-1, DEH-1, and Master Grips. Additionally, both models can be used with Canon and Fujinon broadcast lenses through ARRI’s LCUBE CUB 2.

If you are an SRH-3 owner, ARRI is offering an upgrade path that adds the SRH-360 all the same functionality to the SRH-3 via a slip ring pan axis module.

Pricing & Availability
No word on yet exact pricing for the new version or the upgrade, but expect the SRH-360 to be in the $50K USD range. Both models are also available for rent. The SRH-360 will be shipping in the next few months in different sets and joystick configurations.

ARRI also notes that, going forward, both models will not come with radio modules, but instead, operators will have to choose between the external ERM-2400 (2.4 GHz) and ERM-900 (900 MHz) in order to avoid issues with regional wireless regulations.