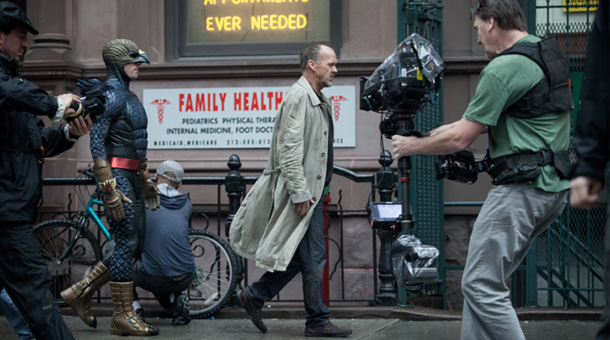 If you’ve already seen the Alejandro G. Iñárritu film where Michael Keaton plays Riggan, an actor struggling to mount a Broadway show, you might already know that the magic of Birdman is the play within the play. If you haven’t seen it, know that the movie is 113 minutes of what seems like one camera continuously pirouetting – a point of view that’s as captivating as the narrative it captures.

Don’t get us wrong, story is king, and watching Keaton explore all of Riggan’s faults and triumphs is as addictive as watching cats on the Internet. The same could be said of Edward Norton liberating himself as Mike Shiner. Even the humor from Zach Galifianakis as Riggan’s best friend and producer, Jake, or Riggan’s fresh-out-of-rehab daughter Sam, played by Emma Stone, is wonderful to watch unfold. But our excitement truly came from witnessing Iñárritu’s directing, Emmanuel Lubezki’s cinematography, Kevin Thompson’s production design, the artful booming from Brendan O’Brien and Adam Sanchez, the color grading from Steve Scott and Charles Bunnag, and the rest of the creative work behind the scenes that made it all possible.

We wanted to know more, especially in terms of camera, so we reached out to steadicam operator Chris Haarhoff, and he uttered exactly what we envisioned the project being. “Right from the beginning, it was overwhelming. You knew coming in it was going to be tricky and everyone was going to have their hands full, but we all understood we had to make it work.”

The stage direction in this film is as complex as they come. Before production even moved to New York to shoot the thirty day schedule, the team rehearsed extensively in Los Angeles. “We mapped everything out, which allowed us to time the dialogue through the corridors and other scenes,” says Haarhoff. “All the doors were marked and all the pertinent moments and geographical aspects were noted so we could rehearse. If we found that a hallway needed to be extended to cover a scene, they would send that information to the set builders in New York so it would fit into what we were trying to do in Los Angeles.” 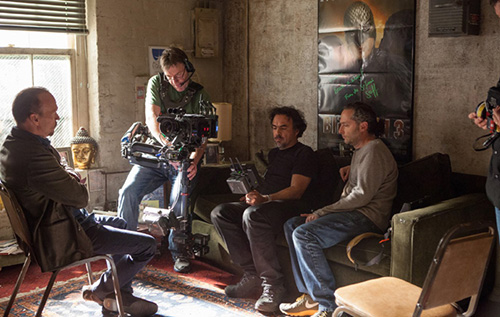 In creating a scene, the director and cinematographer would design each shot first with a handheld camera and then fold it over into steadicam. “This wasn’t always great for me, because what’s easy on a handheld isn’t easy on the steadicam and vice versa,” says Haarhoff. For production, the Arri Alexa XT M and the Alexa XT were lens’d with Leica Summilux-C or Zeiss Master Primes. The cameras were stripped down to essentials; not even a mattebox was used. “We kept everything really clean with a narrow profile,” says Haarhoff. “We didn’t want this big black thing gliding into their eyeline. This way we could get very close and get the light past the lens and onto the actor’s face. Flares were embraced, but controlled.”

During the Los Angeles and New York rehearsals, Haarhoff found that Iñárritu and Lubezki were drawn to the aesthetic of the 18mm, particularly in the close-ups. “We tried a 21mm early on in the scene where one of the stage actors gets hit in the head with a light fixture that falls from the ceiling, but it wasn’t giving the intimacy Alejandro wanted. We ended up going to an 18mm and it paid off.” For nearly all of the steadicam and handheld work, the 18mm Leica was used. When they needed to emphasize something, the 14mm was put in play, but that was rare. “The cool thing about working with one lens is you really get to know it. You’re not changing the size of the piano keys all the time,” adds Haarhoff.

Birdman wasn’t shot entirely on steadicam however, which was a bit of a relief for the operator. Haarhoff mentions that working with Lubezki, or “Chivo” as he’s known, was a great collaboration. “Chivo did all the handheld camera work. I didn’t have to carry as much of the pressure on me as I thought I was going to at first. Chivo and Alejandro are very creative and specific, they have this shorthand that allows them to work really well together. Whenever I felt that I needed to adjust the mechanics of a scene I would usually confer with Chivo and he would discuss it with Alejandro.”

The steadicam operator also worked closely with production designer Kevin Thompson as well. “We had a nice collaboration where Kevin would design the stairs a little wider for my foot size, or create a little extra room in a tight corner on the stages built at Kaufman Astoria Studios in Queens.” The time spent in Los Angeles was to get the blocking and dialogue rehearsed and timed out precisely before heading to New York for two more weeks of rehearsal. “What really hasn’t been mentioned yet on the late-night shows is that we had this great second team of stand-ins,” says Haarhoff. “They all learned the script off book which allowed us to really iron out things before the first team came in. They were really giving the performance of their lives as well.” 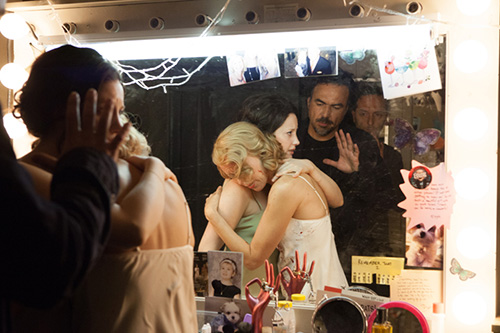 When production started in New York, much of the film was shot in a real Broadway theater, the St. James in Times Square. “We didn’t have any padding during the shoot,” mentions Haarhoff. “They were literally building the sets around us while we rehearsed and shot. We couldn’t just drop a scene on any given day, we had to make it work.” The team would start with the stand-ins rehearsing four or five times on the blocking before moving on to the first team. Then the rest of the day would be consumed by countless takes. “All of us would really hit our stride around take fifteen or so,” says Haarhoff. “It was a type of dance where everyone would hopefully try to peak all at the same moment.”

Focus puller Gregor Tavenner played an important role for obvious reasons. “Gregor is an old-school guy who has pedigree all the way through cinematographer Robert Richardson and a couple of other big-name guys. The depth of field we had on the 18mm was very minimal and he never used a monitor to pull focus. He was incredible, very nimble. At times I’d catch him out of the corner of my eye, squatting through corridors or rooms to get out of the line of sight. When he worked with Chivo, he would have to wear this heavy backpack as he was tethered to him. Sometimes spaces were so tight he would have to put the backpack through a doorway first before going through so he wouldn’t get caught.”

The sets that were built at Kaufman Astoria Studios were the “backstage” areas, such as the theater corridors and Riggan’s dressing room. Thompson had to design the corridors to be a certain length with a number of turns, while the dimensions of Riggan’s room were fine-tuned to accommodate his actions. As the movie progresses and Riggan deteriorates, the corridor to his dressing room would shrink and the ceilings would drop. Inside the dressing room the crew faced an onslaught of mirrors, but Iñárritu decided not to worry about the camera reflections, as these would become visual effects shots. “There were a few spots where we could work around the mirrors, but most of the time we were crossing a lot between actors. Our goal was to shoot it how Alejandro wanted it visually instead of trying to manipulate a scene to avoid them,” explains Haarhoff. 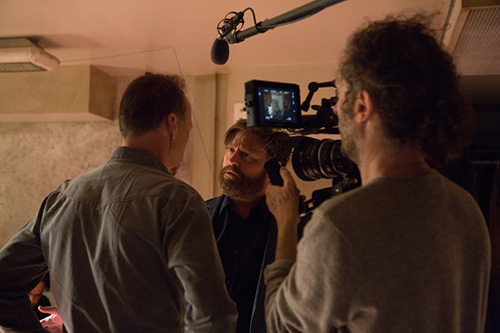 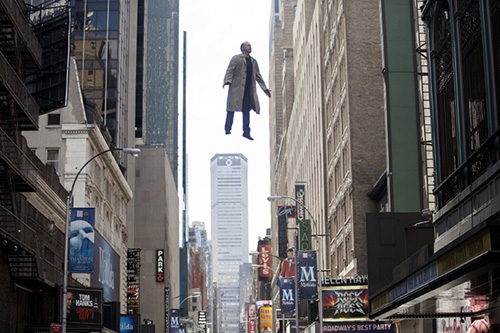 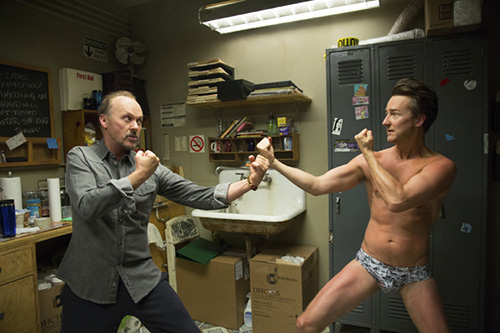 Sound & Picture tried to get Haarhoff to confess some of the technical aspects of Birdman‘s shots, but he was pretty tight-lipped. He didn’t want to spoil the fun of the movie. What little he did mention was that he and Lubezki never passed the camera off from one operator to the next, meaning whoever had the camera in his hands at the start of the take finished. And at times, they would shoot scenes with handheld and steadicam versions.

There’s a sequence in the film that tracks Sam and Mike from the rooftop after playing Truth or Dare to an area above the stage, where they make out. After they kiss for a while, the camera moves from above the stage and onto the floor where Riggan is performing. To move between the two heights, a Libra head was used to create the rise and descent of the camera. “Besides Riggan flying around town, that was probably the only scene [where]we used something more mechanical to get a shot,” says Haarhoff.

Scenes were as complicated as you could imagine. It wasn’t just camera that was working tirelessly to capture Iñárritu’s vision: at every moment a variety of different technical aspects were going on. “Brendan O’Brien, the boom op, had to be just as nimble. We had these great grips that would fly diffusion all over the place. People were hiding behind couches or running up stairs to flag the lights. It was a surprise gig every day,” says Haarhoff.

When they moved outside to Times Square, the crew managed to get the hilarious scene of Riggan running around in his underwear in two takes. “Alejandro wanted Times Square to be packed, so we chose the busiest time on a Friday night. We had the band in the background that took some of the public’s attention away and about sixty people we could control. We basically knew what we were doing and broke Michael Keaton out and had him charge through Times Square. It was New York, so a guy wandering around in his underwear isn’t a big deal,” laughs Haarhoff. “We got through it once and said let’s do it again, and the second take is what you see in the movie.”

For the visual effects shots of Riggan flying around town, production took the more traditional approach of filmmaking. “From the time Riggan takes off until the time he lands, it felt like a normal movie with the normal challenges,” says Haarhoff.

In all, the show was emotionally and physically draining at times for Haarhoff, but nonetheless, it was an experience he will never forget. “I understood the importance and how lucky I was to be able to do it. I don’t think something like this will be repeated for a while, and the people on this crew were great. I was glad and very fortunate to be part of it.”