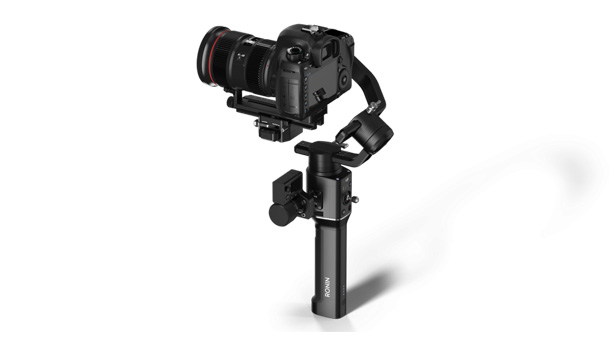 Today at CES 2018 in Las Vegas, DJI introduced two new handheld gimbals. The Osmo Mobile 2, an updated mobile phone gimbal, and the other a new entry. The Ronin-S, a handheld gimbal for hybrid cameras. Both look to be exciting new products. Let’s take a closer look at the new DJI Ronin-S first.

The Ronin-S is DJI’s first single-handed stabilizer for DSLR and Mirrorless Cameras. It’s good to see DJI enter the crowded handheld gimbal space. Many of the features are found in the mature offerings from FilmPower’s Nebula Slant and Zhiyun-Tech Crane-2. 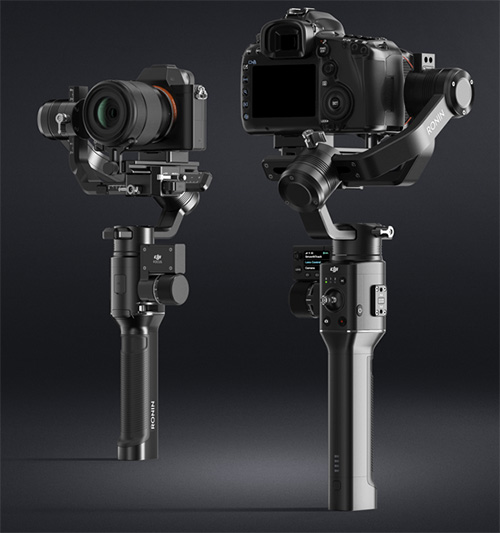 The gimbal has some nice features including two frame sizes to accommodate more camera models in a slanted design for an unobstructed view of the LCD screen. Strong high-torque motors support the most popular camera and lens combinations including the Canon 5D, Panasonic GH, and Sony Alpha systems. Its stabilization system compensates for zoom lenses with higher magnification ratios and an external zooming barrel, while its advanced stabilization algorithms work with both in-camera and in-lens optical stabilization technology. 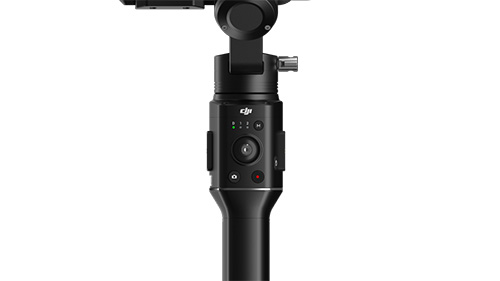 Push mode lets you adjust the pan and tilt axis by hand while the Ronin-S is powered on and axis locks speed up the setup process. Ronin-S has a comfortable, ergonomic curved design that helps capture smooth cinematic movements from upright to underslung positions without obstructing the camera’s display. Ronin-S also features DJI’s intelligent battery technology that can be hot-swapped during operation for extended shoots. 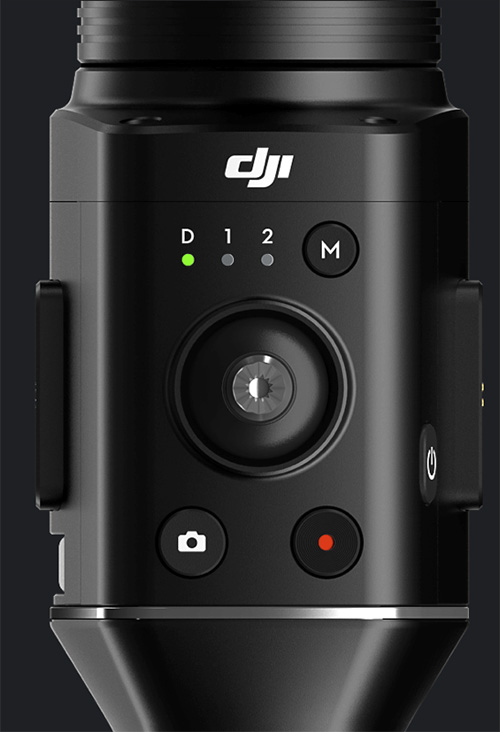 Dedicated control buttons for the camera and gimbal let you toggle between SmoothTrack settings, record and stop the camera, and the high-precision joystick changes the camera position to help frame your shot perfectly. A new “Sport” mode allows for fast movements with tight and quick subject following speed.

Shooting modes on the Ronin-S can be controlled through the DJI Ronin mobile app to create complex camera moves automatically like Panorama, Hyperlapse, Track and CamAnchor that lets you designate specific camera positions in a scene and rotate between them on demand. The user can directly customize SmoothTrack settings with dedicated controls for responsiveness of each axis. Camera settings can be directly adjusted as well.

Ronin-S is compatible with a variety of DJI Pro Accessories including a Focus Control Center consisting of a focusing dial and a screen allowing advanced gimbal and focus control without a mobile device, a vehicle mount solution, DJI Master Force, DJI Master Wheels, an external focus motor, and a cheese plate adapter so they can be used with third-party accessories. 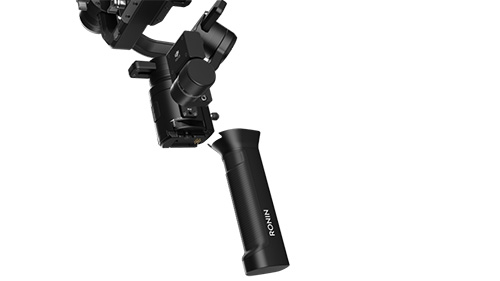 The single handle is removable so the gimbal can be mounted to an RC buggy for low angle shots or even act as a stabilized remote head when mounted to a jib. The dedicated DJI Focus Command Unit can be mounted to the accessory dock, enabling creators to pull focus when operating with the standard handle.You can also attach the Ronin-S to a dual-handheld bar without compromising control of the gimbal, focus or the camera shutter.

As for pricing and availability, Ronin-S will ship in the second quarter of 2018 and pricing will be announced prior to availability. Additional information on Ronin-S can be found at www.dji.com/ronin-s. 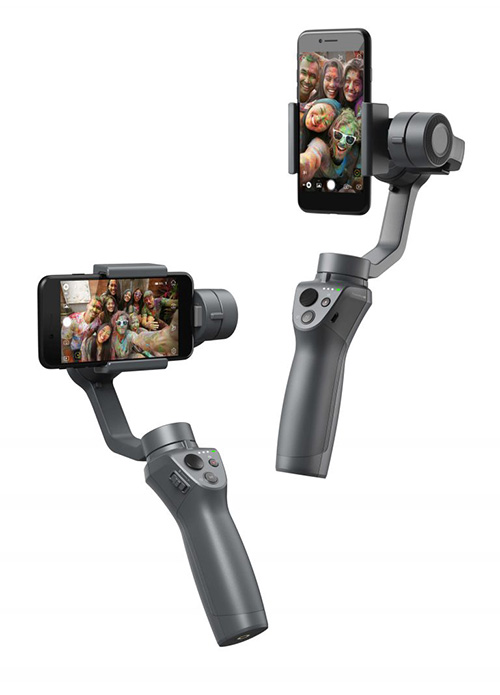 The Osmo Mobile 2 has two big new feature upgrades in it’s redesigned nylon body. One being able to shoot verticle video. I know, I absolutely despise it but social media platforms have embraced this aspect so I give in :-D. The two-way mobile clamp lets you pivot between landscape and portrait orientation. DJI have also added a 1/4” universal screw mount for mounting accessories to the base of the Osmo Mobile 2. The original required a purchase of the Osmo Base to add a 1/4″ thead for mounting it onto a tripod. 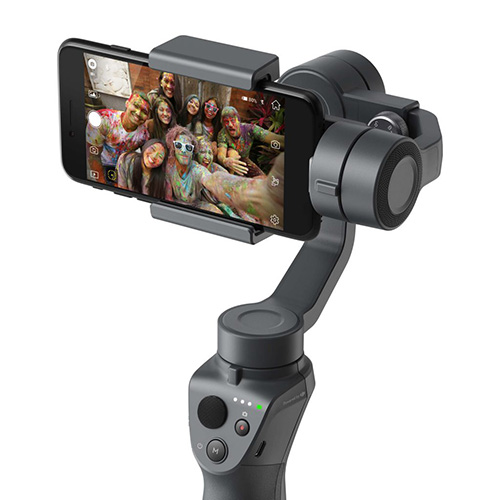 Simpler controls with integrated settings for ISO, shutter speed and more. A new zoom slider lets you operate your smartphone camera from the handle.

The built-in battery system lets you film for up to 15 hours This is over three times longer than the original Osmo Mobile’s battery. The new USB port enables phone charging during use and serves as a power bank for charging other electronics as well. 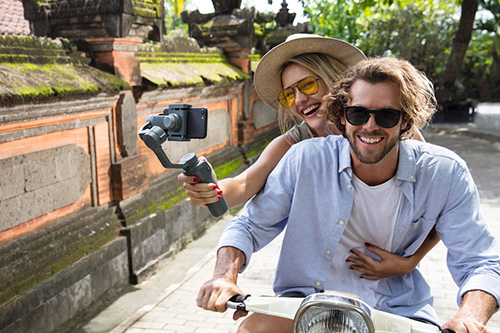 Osmo Mobile 2 retails for $129 USD and will be available exclusively for pre-order at Apple.com on January 23, 2018. Starting in early February, it will also be available at store.dji.com, DJI Flagship Stores, and DJI Authorized Retailers, with additional availability later in February at Apple Stores in select regions worldwide. For more information visit www.dji.com/osmo-mobile-2.

With the rate that gimbal technology has grown and how accessible they have become, the competitive edge will show in the software. The usability and quality of the apps that drive the AI & gimbal performance will ultimately affect the final results.

Interesting new products from DJI. The new Ronin-S looks like it has a lot of the features we are seeing from the major players and with the added DJI accessories could make a great companion to existing Ronin owners. I personally like using small handheld gimbals and they sure are getting better and easier to use.