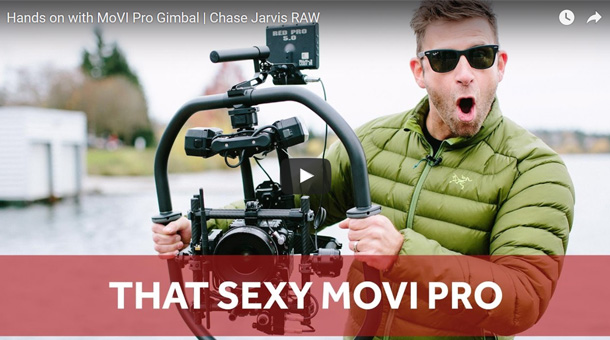 Cinema / video camera innovation over the last few years has largely centered around moving the camera. From jibs, to sliders, to drones and gimbals — all with the aim to give us tools to get unique and interesting shots.

Flashback 10 years ago, when I was working on campaigns with REI, Nikon, etc …. I’d call up my friend Tabb who was a drone geek tinkering in his basement working to combine his two passions of RC flying and photography. That effort turned into Freefly Systems and eventually the MōVI 10 which was the first handheld stabilizer on the market. Today, he’s evolved the idea to a camera movement eco system, where you can take the same gimbal rig from a drone, to a jib, to a car rig, to handheld giving us a fast & interchangeable way to get the shot.

In this episode of #cjRAW, we’re walking through the new features of the newly released MōVI Pro which is an update from the standard MōVI M10. In this upgrade, Tabb and his team focused on 5 areas of innovation:

The new MōVI Pro Battery packs have built-in power indicators and are hot swappable with one hand. The new design enables running all day, minimizing downtime as batteries die. Plus — this is something I really love: the (2) onboard batteries now power the MōVI Pro, the camera, and accessories for over an hour. No more rebalancing after battery swaps. This is HUGE people.

This is a simple one but oh-so-nice. Gone are the days when you’ve been running around set only to have your stand a mile away during breaks. The MōVI Pro includes a detachable ring that’s both a fantastic grip, but also duals as a stand.

Seriously so many details here that film pros will love. Here are a few highlights:
– RED Users now have the ability to fully control camera adjustments from hundreds of feet away from the camera.
– It also now has a built in display for auto-tune and fine tune, removing the requirement to use a separate app.
– Internal wiring makes the rig clean and slick, reducing chance of snagging or having connection issues due to exposed wires.

The controller options are the real MVP of the MōVI. Of course you have single operator mode (aka Majestic Mode) where you can run around and fly the camera, as you might expect.

The second option is the now finalized Mimic Controller — a small handheld (or handlebar ring) that let’s a second operator manage the camera control, while the “mule” or a friend focuses on moving the rig. This is great for more complex moves where the operator must pay careful attention to where they are going, without having to also focus on camera framing.

The last method is via the MōVI controller. While majestic mode + mimic are part of the MōVI Pro standard package, the MōVI controller is a separate accessory in a joy stick form factor. This might be a very comfortable controller for those from the RC or drone world. It also has several other dials which enable camera control…

FreeFly has truly built a system interchangeable ecosystem. Using their using their Toad In The Hole Quick Release system, you can move from jib, to handheld, to car rig, to drone, and many more using the same gimbal system. It’s insanely cool.

Let’s talk about price, shall we? $6500 bucks for the entire MōVI Pro handheld bundle, including the mimic controller.

NOW, people, I realize that $6500 ain’t no chicken scratch. BUT relative to other pro cinema gear – that is a NUTSO low price. I get that it’s steep for single operators / owners making videos on their own, but this is a staple for any pro production house at this price. It’ll pay for itself on the first day with the shots you’ll get. To be clear – the original / basic MōVI is still a slick purchase at $1999. But this version is really next level, what with all the bells / whistles etc. Just my 2 cents. I realize it’s a privileged POV financially speaking…but this is the real deal. And for professional productions – this setup is gold.

For your reference, I’ve included the specs of the MōVI Pro below. Also be sure to check out more info on the Freefly Systems website.