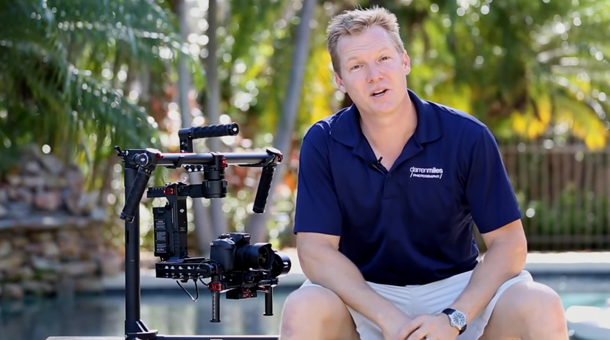 BUILD – it’s top shelf and clearly designed for professionals, made out aircraft grade aluminum, and it’s heavy, tipping the scale at just under 10 lbs and that’s before you add a camera rig and lens. But it’s rock solid. On the downside is the exposed wiring, I see these getting chaffed and possibly ripped pretty easily over time, and to me that’s a concern for its long term viability. The other nit I have is over the included case, though it’s made out of a thick plastic, it’s brittle, as in less than a week the pull handle snapped and one of the screws fell out of one of the handles. So that’s certainly a concern as well. But, I can live with those things as the ronin itself has been amazing in delivering results, and in the end that’s what really counts. For build, we gave the ronin an 8.5/10 – it would have scored higher if it were lighter weight.

EASE OF SETUP: It looks a little intimidating out of the box, as there are two layers and the case is HUGE. But once you get started, it’s a lot easier than it looks. The most important aspect of the Ronin is balancing the rig, as based on my experience, if you do not balance properly from the jump, the Ronin will not operate properly, you’ll literally think it’s malfunctioning. Once you get the hang of balancing various camera rigs on there it gets easier, and set up after a few times through is a snap – balancing the rig is the most challenging part, but worth the time to do it properly. So for ease of setup the Ronin is a 9/10

EASE OF USE AND OPERATION: Once you’re balanced, set up and ready to go, it’s pretty remarkable how great your results can look right out of the gate. In no time, you’ll be able to do smooth pans, smooth tilts, even jib like shots. The only downside is the weight of the whole rig, it can get tiring very quickly, which is unfortunate, because it’s amazing otherwise. For Ease of use and operation we give the Ronin a 9.5/10

QUALITY OF RESULTS: From the moment you use a balanced ronin for the first time, you KNOW it’s something special. With barely any practice at all, I was getting really smooth and professional looking shots with barely any perceptible camera shake almost immediately. It was the solution to so many of the problems handholding or glidecamming presented, I was so stunned by the smoothness of video I literally had to show as many people as I could, and what really brought it home was comparing running with my iPhone handheld, vs. running with a camera attached to the ronin – it’s such a game changing device that cannot be underestimated. The results with the ronin are nothing short of freaking amazing! So quality of the results it’s a grand slam and an easy 10/10!!

VALUE: Given that there are new players springing up all over the place in this space, the perceived value of the ronin and competing devices will eventually become commonplace, but to be first to market with something like this in your respective marketplaces can give you an edge over your competition. At $2,999 the Ronin is definitely a premium device, but with so much competition so quickly, you have to question it’s nearly $3,000 price tag. Prices are destined to fall, but the ronin is extremely well built, includes a sturdy – albeit brittle – case and a really well thought out and intuitive iOS app – it’s a really good value, but lower priced competition from the likes of Turbo Ace, Came-TV and flashpoint may be viable alternatives for your business – the lower end stuff may only have a 2 Axis gimbal or maybe they won’t be built as well, buy you may not need that kind of build either…. So for value the Ronin gets an 8/10.

THE FINAL WORD: If you’re business is anything like mine and you’re a photographer making the transition into video, or fusion photography then this is a really great time to consider embracing adding video to your offerings. The DJI Ronin, though not cheap is a game changing device that does an admirable job of substituting the finished look of several other devices, notably sliders, dollies and jibs. It’s a great way to get into video for relatively cheap and with a really short learning curve – as in no time, the Ronin will have your productions looking hollywood sheik!