Home Reviews DJI hand held stabilized mount for the camera from the Inspire 1... 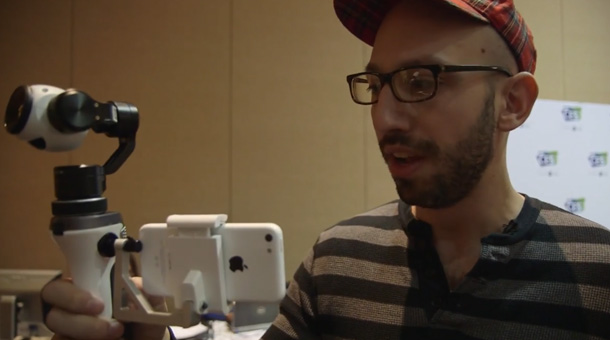 At CES 2015 in Las Vegas DJI announced a new hand held stabilised mount for the camera that comes on the Inspire 1. We are not at the show this year but The Verge have the scoop.

This is great news for owners of the Inspire 1 as the 4K camera and gimbal can now be used for more than just aerial filming.

The 4K camera and gimbal assembly easily detach from the Inspire 1 body and can be attached to the hand held mount. Once attached the controls are very basic. On the handle there are controls for shooting both video and capturing stills. The hand held mount also comes with a built in microphone and a 3.5mm jack for attaching an external mic. You use a smart phone with an app to view and record your material.

The Inspire 1 camera doesn’t have a battery so DJI have included a removable rechargeable one inside the handle. According to DJI the battery will last for around 70 minutes when filming video.

There are two different operating modes available. One locks the camera direction so that no matter how you move it remains straight. Mode two lets you pan and tilt the camera while tracking your subject.

This is a clever move from DJI and it is sure to sell more Inspire 1 quadcopters given this added versatility. It will also be interesting to see if DJI ends up selling the Inspire 1 camera and gimbal separately.

There is no information yet on pricing but it should be available in Q2 of this year.