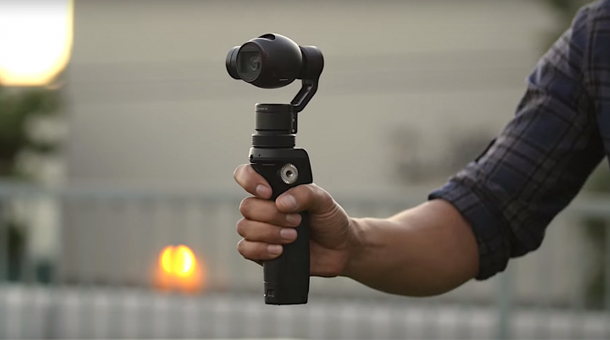 DJI’s drone cameras have come back down to earth, and have been transformed into a unique and powerful tool for stabilized handheld video.

The Chinese company today announced Osmo, a new twist on the action camera that has tremendous potential not only for consumer-level videography, but for filmmakers as well. Sporting a simple pistol grip and one of DJI’s Zenmuse 3-axis gimbal stabilizers, the Osmo brings highly-stabilized 4K video and 120fps HD video right to your hands. The device also offers hyperlapse and timelapse functionality, as well as panoramic shooting.

First up, here are the two introductory videos for the DJI Osmo.

Like the rest of DJI’s cameras, the Osmo needs to be used with a smartphone in order to monitor your footage and change most of the internal settings on the camera. With that said, the pistol grip has some basic functionality built into it, like a record button, joystick for controlling the gimbal manually, and a toggle switch to change the mode in which the gimbal is operating.

Here’s the footage that DJI released:

And here’s the Osmo in use with the Zenmuse X5P camera in a professional filmmaking environment:

The real innovation here — if you want to call it that — is the stabilization, or at least the form factor in which it’s presented. While pistol grip gimbal stabilizers for GoPros and phones have been available for quite some time, DJI’s integration of the camera and stabilization hardware should give users a far more streamlined shooting process than they would otherwise have. Add to that the fact that the stabilization here is really impressive, possibly even leaps and bounds better than the competing pistol grip gimbals, and you’ve got a device that has some serious filmmaking potential, especially when paired with a better camera. 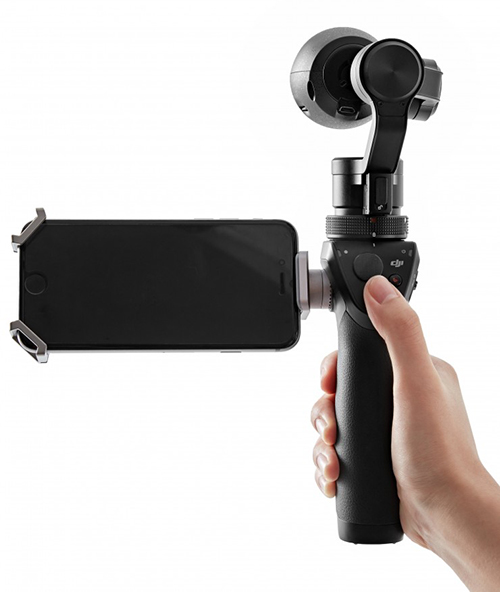 That brings me to the coolest aspect of this device, which is that it can be upgraded with either the camera from DJI’s Inspire 1 drone or DJI’s new Zenmuse X5 cameras, which means that Osmo users aren’t limited to shooting on a prosumer drone camera. This could also mean that the Osmo will be compatible with new DJI cameras as they become available, meaning that new and improved Phantom 4, Inspire 2, or Zenmuse professional cameras could be used on the Osmo. That’s just speculation at this point, but it seems like a no-brainer for DJI to allow different segments of their user-base to choose different cameras based on the feature set that they need.

The DJI Osmo will set you back $650, and is expected to begin shipping on October 15th.