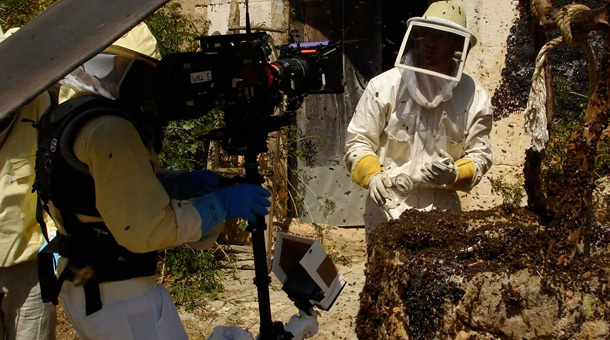 When you want to follow your superhero flying across the planet, you need more than a tripod to get that great action shot.

In 1977, newcomer cameraman Garrett Brown wasn’t happy with the state of handheld filming technique, particularly, the jerky motion that often occurred with action shots travelling over uneven terrain. He knew there had to be a better way than supporting a heavy 35mm motion picture camera while on the move. And as such, the Steadicam was born.

Making its debut in the film Bound for Glory, the Steadicam was an instant hit. Garrett, who ironically was also making his feature film debut, wasn’t surprised. For several minutes, Garrett followed an actor from atop a crane, then stepped down and followed alongside him for one long shot that couldn’t have been done with a tripod, a dolly, or anything else for that matter. Eventually, the Steadicam was used on movies like the Rocky series, The Shining and others. Garrett Brown and the Steadicam were a hit.

Proving that cameras no longer had to be tied to tripods, camera supports now come in all shapes and sizes. From the Steadicam JR, to the body crane, to Mike Figgis’ steering wheel contraption the Fig Rig; affordable camera supports are helping film and video producers get the shots they need.

The Real McCoy
In the nearly 30 years since Brown invented the Steadicam, many have gone into business to compete with his design. This competition has created some really affordable and durable designs for getting that no-shake handheld tracking shot.

Tiffen, the company that now manufactures and distributes Brown’s groundbreaking Steadicam design, recently announced at NAB the next generation — the Steadicam Ultra2. Reengineering the design from the ground up, Tiffen has created a design that is truly plug and play with all its electronics turned solid state. Additionally, the Ultra2 G-70 support arm is lighter and stronger, giving it the ability to carry up to 70 pounds and have a more responsive feel for the camera operator. However, with a complete package costing more than $40,000, this is clearly for the big-time pro.

Glidecam’s answer for the serious amateur is still the V20, which can stabilize cameras weighing from 15 to 30 pounds and complete systems cost less than $5,000. Varizoom is also in the game with its Aviator stabilizer system — which can carry cameras north of 15 pounds with 38″ of vertical travel on its dual-dynamic arm and 3-axis gimbal.

However, if one is on a shoestring, the Steady-Orb might be the answer. Developed by yet another Hollywood camera person with a better idea, the Steady-Orb is made of lightweight, hand machined aluminum and Teflon and was designed specifically with Mini DV camcorders in mind. Its two-position system allows for either a counter balance, or a secondary camera. The entire system includes a top camera mount plate, a two-piece supporting shaft that allows up to a 45-degree pitch adjustment, Teflon lubricated gimbal assembly, removable handle, balance plate, and a bottom camera mount bracket for vertical and horizontal shots. All at a weight of about 4 pounds plus the hard plastic carrying case.

Cranes and Jibs
Cranes have been around since the early days of cinema. They are great for lifting camera equipment, camera operators, and even directors to get that high overhead shot. Today’s videographer may not need the girth lifting ability of its professional cousins, but there are several options out there to get that unique shot. GlideCam makes the Body Boom. Think of it as crane, meets Steadicam. The Body Boom rises from as low as 1 inch, to a towering 10 feet above the ground. With its built in motor driven pan and tilt mount, the system was designed for use with HD, DVCAM and Mini DV camcorders, meaning that it’s ideal for just about any video budget.

Recently announced at NAB, the JonyJib Pro is for the serious crane shot. It has a maximum reach of 33 feet, or can nest to a compact 9 feet in length. Its design also means that the unused 4′ sections of the crane arm also double as ballast when nested in place. A well thought out design.

Hello Dolly
Dollies are a must for those wanting to get that smooth, slow moving shot down a hallway to create a sense of tension. Also at NAB this year, Indie Dolly Systems announced its newest Indie-Dolly. This new design can create dolly shots from tabletop setups to a full size dolly track with camera operator on board. Fully adjustable in size and width, the 12-foot dolly track can be either straight or twisted, shimmied for any terrain, is made out of aircraft-grade aluminum, and coated using a 13-step anodizing process. Total weight in two bags equals 78 lbs. MICRODOLLY makes similar systems.

Hand Held
Mike Figgis is known for his outside of the box style of filmmaking. He brought that same kind of new perspective to his Fig Rig, which Manfrotto loved and agreed to make nearly on the spot. The modular steering wheel design is not only specifically designed for DV cameras as a support rig, but also holds a variety of accessories such as mics, lights, zoom controllers and more. It is Figgis’ answer to a Steadicam without the pricetag.

Whereas, Steadicam’s answer to a handheld stablizer was to go back to Garrett Brown for the Merlin. At $799, its curving counter balance and folding-caliper hinge can not only steady cameras weighing from ½ to 5 lbs, but allows instant fold-up for shoulder-mounted shooting. This nearly featherweight design (nearly four times lighter than the original Steadicam JR) translates to longer camera time and less operator fatigue.

Also turning heads at this year’s NAB, 16X9 Inc. showed off the TÖrtleRig ($1,175). This odd looking backpack device for DV and HDV cams moves the weight of the camera from the operator’s hands and shoulders to the hips, by hanging the camera fishpole-like over the operator’s head. Its bigger brother is being used on such shows as Lost.

Keeping it Close
Other unique camera supports include the Davis & Sanford Steady Stick, which allows the camera operator to shift the weight of the camera from the shoulders to the waist and hips. Capable of carrying up to 30 pounds, the Steady Stick is also great for those scenes where an actor must act as his own camera operator for the surreal shot where the actor doesn’t appear to move but the world around him does.

Getting that dramatic car shot can really add another level to your video. That’s where the Sticky Pod can come in handy. Created by inventor Tom Heibel, who was looking for a camera mount that would hold up at speeds of 100 MPH, the Sticky Pod was his solution in a barren market. Its secret is hard gripping suction pods which can stick the mount to just about any kind of vehicle moving at a high rate of speed. Mounted either inside or outside of a car door, window or hood, it promises to hold any consumer camera firmly in place even while breaking the speed limit.

Clearly, with the advent of a growing prosumer video market, there is a starving need for camera supports, which will take getting that professional shot to the next level.

Whether you’re interested in using a Steadicam, crane, FigRig or all of the above devices, the support that you’ll get from this type of product can only mean that the shot you need is practically in the can.

James DeRuvo is producer and editor for a broadcast production company.