Home Articles Field Test: Ronin 2 is a High-End Gimbal That is Surprisingly Easy... 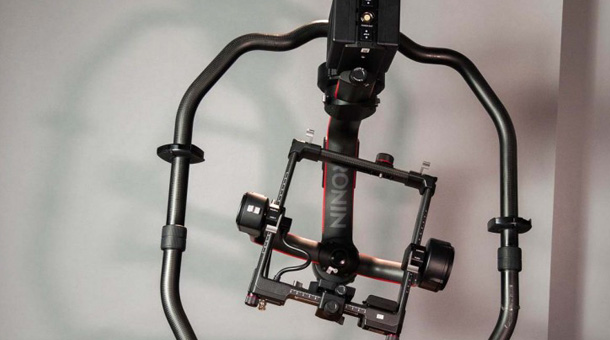 DJI is back with a major revision to its popular Ronin gimbal with the heavily upgraded—and more expensive—Ronin 2.

DJI is a world crusher in drones, but the company has long felt like the “second brand” of gimbals, with FreeFly systems and its MoVi being at the top of the pecking order. While the Ronin has the biggest rental base on indie platforms like ShareGrid, MoVi has the biggest penetration into high-end production. With the Ronin 2, announced last April and shipping as of a few weeks ago, DJI is clearly pushing hard to get to the same dominant position in ground stabilization they have in the sky. The massive team of engineers, product designers, and market researchers behind this product clearly emphasizes that point.

At launch, the Ronin 2 design felt like a major revision that seriously took into account feedback from the marketplace and set out to be a gimbal that everyone would be happy with in demanding shoot situations. Combined with the launch of the Ronin S to fill in the gap at the entry level, the top end Ronin was free to move up to the top of the market. We got our hands on a unit to see for ourselves if the Ronin 2 would fulfill its promise. 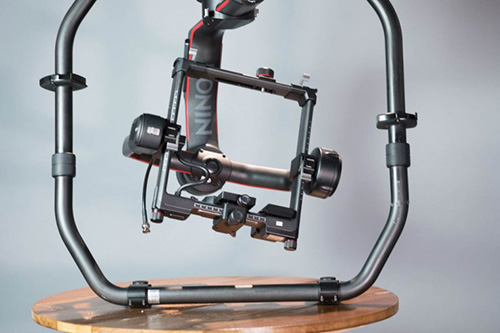 Our impressions: weight
The Ronin 2 is definitely heavier than the original Ronin. It’s not impossibly heavy, but it is solidly built with a package weight limit of 40lbs. Built throughout from carbon fiber, the arms and ring themselves don’t weigh all that much on their own; it’s when it’s fully assembled that it really hits you.

That being said, weight is an issue only inasmuch as your camera weight is an issue. With an EVA1 package, coming in at 5lbs with lens and accessories, the whole unit feels easy to hold for long periods of time. Going up to bigger packages like the RED, Alexa, or 35mm film will benefit tremendously from strapping something like a Ready Rig on your chest to spread the weight around. In our test, we rigged it up with an Epic, a rear mounted AB Gold mount battery, and an Angenieux Optimo (but not the 24-290, we’re not insane), and it kept the camera perfectly stable despite the weight. However, lifting the whole package would be too exhausting for a single operator and really demands a dual-operator setup or to be lifted by something like a Ready Rig or a crane.

It is genuinely the first gimbal we’ve worked with that felt truly user friendly.

As you can see from the test footage (shot with the help from some of my students at Feirstein), the Ronin 2 is more than capable of keeping the camera stable through a wide variety of situations. The more fascinating test results to us are how fast the Ronin 2 is to set up, calibrate, and then get shooting with, and especially how easy it is to learn how to use. With the simplest of instruction, the students in the video were able to get shooting in 15 to 20 minutes. With a little bit of time playing they had a whole host of ideas about what to do with it. Auto calibration made returning for lens swaps a breeze. It is genuinely the first gimbal we’ve worked with that felt truly user friendly, where you could get yourself up and running with it in a matter of minutes instead of hours. Put through several days of practice use with multiple cameras, we never had a single hiccup aside from occaisionally having some drift when switching the remote control on or off.

We also greatly appreciated having an on-unit menu monitor, which allowed for easy calibration of the unit without relying on external apps and bluetooth, which made both auto-tune and fine tuning calibration a snap. Especially useful is the design work that DJI has put into cable routing for both power and image. Internal SDI along with internal power routing make it exceptionally easy to get image out to an external monitor or Teradek, while feeding power from the main batteries to the camera body and accessories like a follow focus. 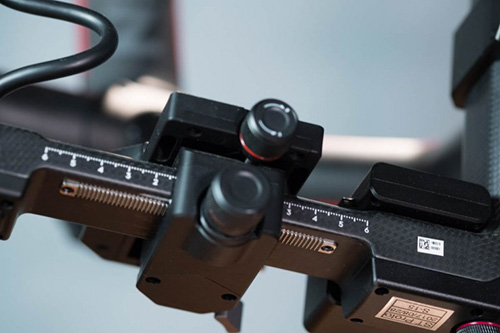 Side to Side balance is just a hair too aggressive.

Small tweaks
If there is one thing we would tweak about the Ronin 2 (aside from filling it with helium or making it from something even lighter than carbon fiber, neither of which are realistic anytime soon), it would be the side to side balance nob. We’d prefer having all the pan/tilt/roll balance adjustments be controlled by a worm gear, like on a Steadicam donkey box, making it easy to precisely balance the rig. For the front/back adjustment, the knob works perfectly. However, the speed it moves the camera side to side is just too fast, considering the small distances involved (a camera package might be 20 inches long but only 5 inches wide). Looking at the unit, it seems like it would be easy to swap out an aftermarket part (a new gear and new flat teeth), and I wouldn’t be surprised to see an accessory maker come out with a “fine roll adjustment kit” that you could swap in.

One other annoyance is that, once the batteries are full, they continue to beep until you take them off the charger. While, yes, it’s nice to know they are finished, and on a Ronin type shoot you are likely to be far away from your charging station, it’s still super annoying. Most modern chargers put the batteries into a maintenance or sleep mode when full. Having the charger just keep beeping at you is lame, especially since, if you’ve got the rig up in a Ready Rig, for instance, you might not want to put the rig down immediately before doing another take. Small thing, but noticeable.

On the plus side, those batteries are the same batteries used by an Inspire drone, which means if you are out with both a Ronin 2 and an Inspire, batteries will interchange between the two units. This probably won’t save your life on that many shoots, but even if it only comes in handy a few times a year it’ll still be a huge relief when it does so. 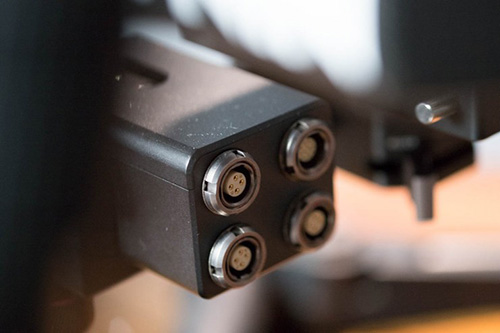 Remote control
While the unit is compatible with standard remote control protocols, DJI makes its own remote that is part of the pro package and it is a good complement. The Ronin 2 can be operated by a single person, but it really comes to life when you have a “dolly grip” holding the rig and putting it somewhere in space and a “camera operator” on the remote control handling pan/tilt/zoom in concert wtih the dolly grip to choreograph complicated, elegant moves.

The first instinct of most users, when realizing how easy it is to pan and tilt, is to ask “why isn’t roll mapped to the main knob?” It’s not, it’s mapped to its own knob, which actually makes sense. Rolling, and taking the camera off level is a less common use case, and something that you never want to do accidentally. By separating the rolling function out to its own knob, DJI has given users an extra layer of safety without removing functionality. If you have the correct cabling, roll/cut is also possible with the remote, an extra handy feature. 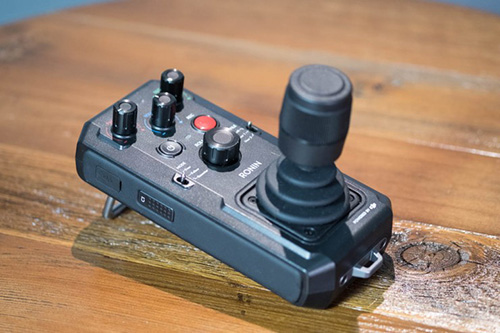 Price
The Ronin 2 is available for $7000 in the full setup, or for a lower cost $4000 with many of the options stripped out. We think most users should plan on the $7500 version, as the $4000 option removes not only the remote control, but also the power supply options, the various cables, and adapters. If you are in a remote location, own your camera, already have a remote control that is Ronin compatible (many are), and are 100% sure you’ll never need to set it up for other cameras, the cheaper option could make sense, since you can just buy the accessory cables you need. However, if you plan on doing any kind of rentals, or being a freelance owner/operator of a rig, and you want the flexibility to be ready for a wide variety of cameras and lens combinations, and especially different follow focus systems and accessories, we think you’ll end up saving money by just getting the entire package together all at once.

A note about the cables: If you’ve ever had custom-made cables created before, you know how expensive they can be. While a USB cable is basically disposable and often available for $1, and Thunderbolt cables run up to $50 for normal lengths, a 6″ motion picture power or data cable can run into the hundreds. DJI makes its own cables, from scratch, in house, keeping the prices down. It’s why the metal on the cable connectors is a darker silver than most other connectors. So far, all the cables we tested work perfectly, and we’ll pay attention on future jobs to see how it works going forward and if these custom built cables will hold up to real world use, but even saving money on cables is a huge benefit.

Its main drawback is weight. Only those in the absolute best shape will want to operate the rig without a Ready Rig or other weight distribution system.

Conclusion
Overall, the Ronin 2 is designed to compete head to head not just with the MoVI Pro, but also the MoVi Pro XL. While it’s price is a big jump for DJI vs the original Ronin, considering the $20K price tag on the Pro XL it seems more than fair for the amount of performance it delivers. It’s the easiest stabilizer to set up that we’ve ever worked with, and there are amazing details throughout that demonstrate a lot of thought and planning going into the design. Its main drawback is weight: only those in the absolute best shape will want to operate the rig without a Ready Rig or other weight distribution system. But with two people carrying it (which we tested and had a lot of fun with), and a third on the remote, or rigged to a car mount or crane, the price to performance combination is a major leap forward for DJI. For those with smaller packages and lighter needs, there is also the Ronin S, to fill in the space below the now heavier 2.