Over my career in the photo & film industries I’ve had the good fortune to collaborate behind-the-scenes with many of the brightest minds, top brands and most innovative products. Among those I count experiences with Apple on iPhone and other products, with Nikon on the world’s very first video DSLR (D90), Ustream and now Meerkat and Periscope on live internet broadcasting and…well…drones, software, computers, etc…game changers that completely re-defined entire industries and — most importantly from my perspective — they share the common thread of having led to the democratization of creativity.

Today marks the public debut of yet another one of those ‘pinch yourself’ highlights…the opportunity to collaborate on MIMIC. What pray tell is MIMIC you ask? Well i’ll give you this tidbit first, and then let you watch for yourself…

MIMIC represents a completely intuitive and organic way to control a cinema / video camera remotely… NOT the camera settings…but what the camera actually sees and records. You’re familiar with the concept of a steady cam, right? Well consider that with this product you can now operate a stabilized camera remotely, right from your director’s chair with a simple-to-use device that track your movements and translate them into smooth, precise camera moves.

The genius minds behind MIMIC are Freefly Systems… the same minds that more than 6 years ago I was hiring to fly custom, camera-carrying drone helicopters. The same people who 2 years ago created the MOVI system – a handheld digital stabilized camera gimbal, so advanced, it completely redefined camera stabilization.

So why is MIMIC so revolutionary? In short MIMIC fills in a previously-huge gap in cinema. Where the MOVI brought camera stabilization out of Hollywood and delivered it to the masses…MIMIC now allows expert users, intermediate users and — even people with even the most limited camera experience — to “drive” the camera in the very most intuitive way imaginable and get the shots you want. See for yourself what these 5 year olds can do on their first time using this device…

SO.. If you are a newbie and combine MIMIC with MOVI, you will get better shots than with nearly any other camera stabilization + composition system on the planet the first day you use it. If you are an intermediate operator or director you will get insanely high quality shots within minutes of first use. And if you’re an expert operator you will be catapulted into the stratosphere and the only thing holding you back will be your DNA’s urge to hold onto the past ways of thinking about camera movement and stabilization. 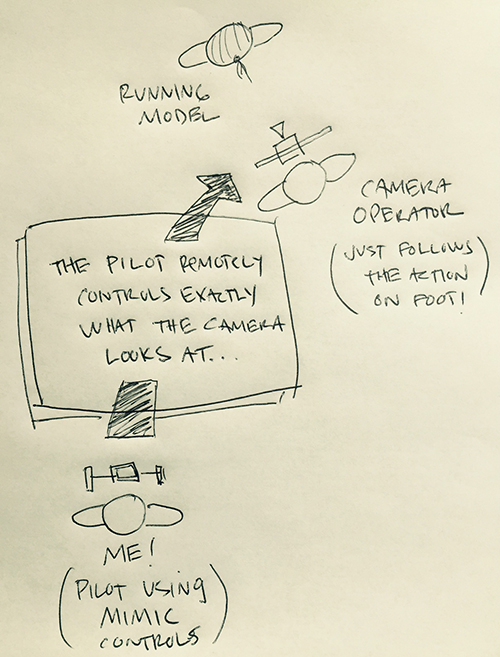 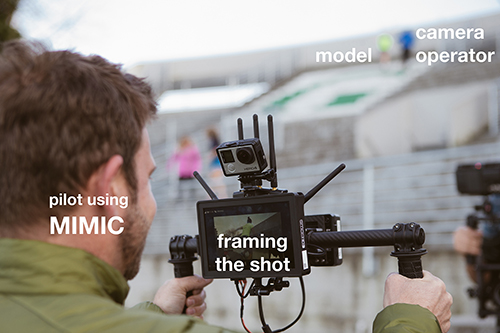 The MIMIC configuration pictured here (monitor, handles and sensor) in these videos is just but one configuration…. the sort of “steering wheel” style where the pilot remotely drives the camera gimbal like a video driving- or flying-game… Imagine if you will another configuration I also was able to use in preparation for this launch… one where I was able to pilot the camera with a set of VR-like glasses. YES I’M DEAD SERIOUS. Just sitting there in my directors chair I was able to control the camera w being held by my operating counterpart simply by moving my head in space left, right, up and down in space. I could see exactly what the camera was seeing and was able to steer the camera with nearly flawless precision by simply looking at the feature in the scene I wanted to see. Anywhere I looked, the remote camera (held by my camera op counterpart) would track exactly to that framing. Wow. This truly is the future.