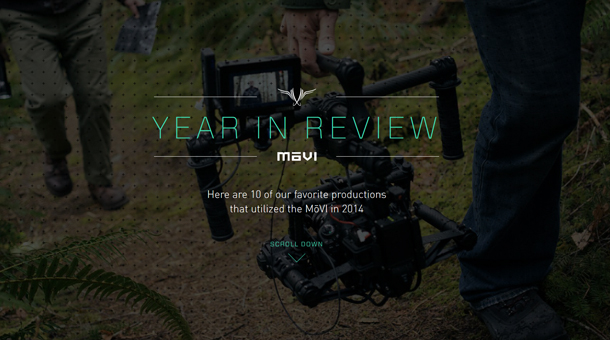 #01
Nick Goepper Breaks Down His Winning Slopestyle Tricks
Kirk Bereska launches off massive jumps, while carrying a MōVI M10 fitted with RED Epic / Phantom Miro, to show what it feels like to fly with world class freeskier Nick Goepper.

#02
From 1994
Casey Warren and Danielle Krieger break new ground with the ARRI Alexa M on a prototype MōVI M15 and tell a very personal story in the process.

#03
DEDICATED
Corey Rich took the MōVI M10 on a 21-day shoot around the world with the Nikon D4S to reveal what drives three of Nikon’s top photographers.

#04
Epecuén
Red Bull followed Danny MacAskill through the ruins of Epecuén with a RED Epic on the MōVI M10 to breathe new life into an abandoned city.

#07
Afterglow
With the MōVI M10 and CineStar 8 flying a RED Epic, Sweetgrass Productions combines mind-bending visuals and an unprecedented sense of scale for a ski film like no other.

#08
Intelligent Details
What do you use to film a $300,000 car? Why an iPhone 5S on the MōVI M5 of course! Reza & Co. tested out the MōVI M5 Mobile Kit for a Bentley Mulsanne ad with beautiful results.

#09
Pillar Point – ‘Dreamin’
Wild Combination braved 2-degree weather with a RED Epic on the MōVI M10 for a production that made its way from Penn Station to the forests of upstate New York.

#10
The Ridge
Danny MacAskill takes on the Isle of Skye in The Ridge, Cut Media’s latest film shot on the MōVI M5 and Panasonic GH4.