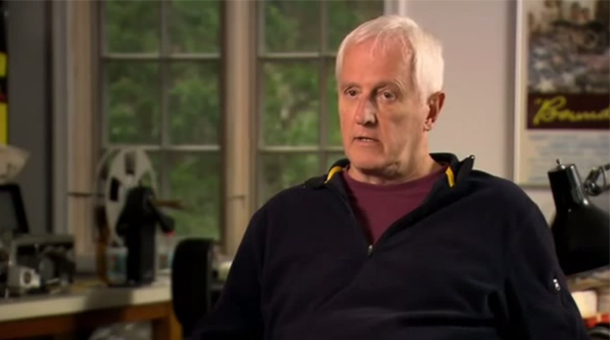 The Steadicam is an Oscar-and Emmy-winning invention that revolutionized filmmaking. But Garrett Brown, who fathered the technology, never thought of himself as an inventor; he’s still getting comfortable with the “I” word. Prior to his Steadicam work, Brown had made one other foray into inventing. He created a vacuum blimp for the “Arri 2C that weighted five pounds and made operation very quiet. “But when I went to patent it,” Brown recalls, “I found a dominating patent.” Lee De Forest, who’d invented the vacuum tubes in old radios, had also been thinking about cameras. “It was shocking to me, and put me off the whole idea,” says Brown. Brown wasn’t put off for long. His vacuum blimp patent never came to be, but he soon felt, as a cameraman, that something was missing in the world of film equipment. “I didn’t think ‘Oh, the Steadicam is missing!’ but I kept getting clues that it might be possible to hold the camera in your hand and in some way stop it from shaking. If I’d been as organized then about this process, I’d have gotten around to inventing the Steadicam a lot faster. I know now how to hunt for missing things. But it took years to learn this.”

It also took Brown years to move into cinematography, and he brought with him all the eclectic skills of his past professions. He was stricken with nephritis at a tender age, which kept him in bed for months mastering a ham radio. Instead of playing sports, he decided to be a writer and filled a notebook “with silly inventions.” Brown’s father, a Du Pont employee, was also an inventor. Brown Sr. came up with “Hot Milk,” a plastic substance that replace glue in binding paperback books. The in-house invention revolutionized Du Pont’s product, but Brown Sr. didn’t earn a dime for his efforts; Brown Jr. went to Tufts on a Navy scholarship.

The name Garrett Brown could have become a household word if his folksinging career had taken off. In the early ‘60s, Brown left school, hit the road, and made a record for MGM with his Kingston Trio-ish band. The guitarist/banjo player told jokes onstage. “ But the market was in songwriting,” Brown relates. “We were all scrubbed-up. We sang spirituals.”

An auto accident forced the group to cancel shows; eventually, the act broke up. Brown then tried to get a job in film production, “but I couldn’t get arrested.” He did manage to get a job as an advertising copywriter. During his attempts to break into filmmaking, Brown had read every book on film production in the Philadelphia library, and this expertise came in handy in commercials. Brown produced so many award-winning spots that Rumrill Hoyt bought out the Philadelphia agency that hired him, specifically to obtain his services.

Brown felt he had done enough on the agency side, however, and decided to open his own production company and direct. “I starved and failed,” he recalls. In 1969, he tried again with his new production company. Brown taught himself to shoot, built a studio in a barn, and filled it with purchases from a bankrupt production house in the area. He got lights, synchronizers and an old Moviola, as well as “a three-wheel behemoth of a mike boom, and an 800-pound cast-iron camera dolly.” The last item was an unlikely precursor to the Steadicam. “It was a wonderfully smooth dolly, but it was a pain in the neck,” says Brown. “It absolutely astounded me that you couldn’t isolate the camera so you could walk 20 feet with it and not have it shake.”

Brown began to build things. He came up with the “Coptercam,” a rig consisting of a camera hung from a ball 30 feet below a helicopter. “You could look through the window of a moving car,” explains Brown, who shot some Subaru spots with the device. Subsequent inventions included the “Shakycam” and the “pogocam.” The pole rig was simply a pole with a crossbar and a couple of weights. “Damned if the thing wasn’t stable,” says Brown. “I could put the camera on it, and walk along. But when I tilted it, it rose up six feet.” That ruled out any low-to-looking-up shots, so Brown created the ultra-light 70-pound crane, made of aluminum, which allowed the camera to pan and tilt. A fiber-optic viewfinder let the operator eye the lens from the ground. Brown’s agency clients signed secrecy agreements, so no one knew how he got such great shots.

The creation of the Steadicam was a long, fascinating process for Brown. “In my off hours, I was always working on a new variation,” he says. Initially, there was a harness made with bungee cords that ran through six pulleys to create support off of Brown’s shoulder. “This was wildly impractical in the end,” he submits. “It wouldn’t fit through narrow places in the set.” He was reluctant to give up the idea that it was possible to shoot overhead from ground level in one shot, “but you have to compromise. You can’t expect to do everything at once.”

Brown checked into a motel and stayed in his room for a solid week, balancing brooms on his fingers, dashing out to hardware stores and studying old drawings. Jack Hauser, a retired Navy machinist, helped Brown fabricate parts that the inventor drew up on paper. The first Steadicam came together in 1973, complete with the fiber-optic viewfinder. “And the damn thing worked,” Brown marvels.

An Arnold Palmer commercial very nearly served as the vehicle for Steadicam’s professional debut, but Palmer’s manager wouldn’t sign a secrecy agreement. “I knew I could get some great shots for the commercial with the Steadicam, but we shot it in the conventional way,” Brown recalls. Then after the shoot wrapped at twilight, Brown scampered onto the golf course, loaded the camera, and ran around shooting. “Anybody in the business who looked at that film would know right away that 20 or so shots I got were impossible.”

Brown had a fabulous demo reel for his new product. Rocky director John Avildsen was watching the reel when he spotted his camera assistant, Ralph Hotchkiss, who was then assisting Brown. Avildsen, impressed by the possibilities Steadicam introduced, called Brown at home from stage 15 at Burbank Studios. Brown wasn’t home, but his wife knew where to find him: on stage 16 at Burbank Studios. She told Avildsen, who went outside to meet Brown. Brown came out with his camera ready, and began shooting footage of the director.

The same demo that impressed Avildsen was sent to Stanley Kubrick, who was then preparing The Shining. He told Brown via telex that his new invention would revolutionize the way movies were shot. He added that a skilled counter-intelligence interpreter could detect the nature of the mechanism from the shadow on the ground, and suggested that this portion of the demo be clipped. Kubrick ended up using the technology to shoot portions of The Shining.

If Cinema Products Corporation hadn’t bought Brown’s invention and officially named it “Steadicam,” the industry might know it by it’s original name: “Brown’s Stabilizer.” Since then, the product has evolved into a mini-industry that features the Steadicam JR for camcorders, an ultra-light two-pound version; Skyman, the aerial tram car; and other variations using the same principles and materials (plastic, steel, and ceramic).

Any good Steadicam operator gets involved with the process,” Brown notes. “The better ones can make quite a contribution.” Currently, there are 260 active members in the Steadicam Operators Association, Inc. “But less than half of them are real aces, and only several dozen are absolutely top-rate masters,” says Brown. “The best operators are formidable characters. They arrive on the set with their gear and perform miracles, moving the lens and camera through space–not only aiming it but transporting it, in ways that enhance the production.”

The top players generally regard Steadicam work as the ultimate assignment. “You’re intensely involved in the picture at the most focal point of the whole effort,” says Brown. “You’re doing something both artistic and athletic [Brown was once charged by a rhino on the job], something that requires communicating skills. It’s a difficult stunt. And when the work is done, you don’t have to stay up all night taking responsibility for the picture, which is one of the difficult aspects of directing and producing.”

Steadicam work is still evolving and new recruits are enlisted each year. Many come out of workshops taught by Brown and Steadicam specialist Ted Churchill . “We finally figured out, in 1980, that to expand our ranks we had to teach. Now I’ve moved on; there are even names I don’t recognize, which is great. Steadicam has become what it always should have been: a good tool for this business. And I’ve become what I always should have become: an inventor.”