Home Reviews Get Your Hands on the Steadicam Volt Smartphone Gimbal Now for Under... 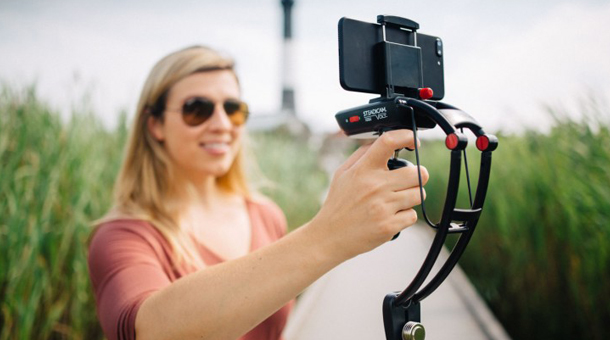 High-end stabilization for your smartphone camera from the industry pioneer has arrived.

With several gyro stabilized gimbals already competing in the marketplace, Steadicam is getting into ring with the new Volt, a handheld motorized stabilizer for smartphones and GoPros. Started with a Kickstarter earlier this year, the Volt is now shipping to the mass market for $199. While that is a bit pricier than some of the rivals in this space, the Volt has a few standout features that might make it worth the upgrade. 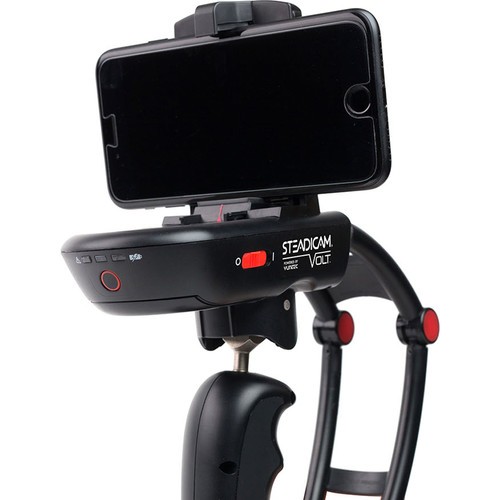 The main difference between a Volt and its competitors is that while this is a motor-assisted stabilizer, the Volt is also fully capable as a stabilizer with a dead battery and the motors off. With a design that is clearly descended from the elegant Steadicam Merlin, the Volt might not work as well without battery power, but this is a fully functioning stabilizer even without charge. That alone is a perk (we can’t tell you how often we forget to charge the little smartphone stabilizer that lives in our scout bag before a scout), but it also points to more interesting parts of the design.

By focusing on the traditional Steadicam design, with one arm being used for support and another hand lightly touching the sled for framing, far more complicated moves can be created without requiring a remote control or a second operator in a smartphone app. The Volt works like a traditional Steadicam sled when properly calibrated, only with motors to help you along. 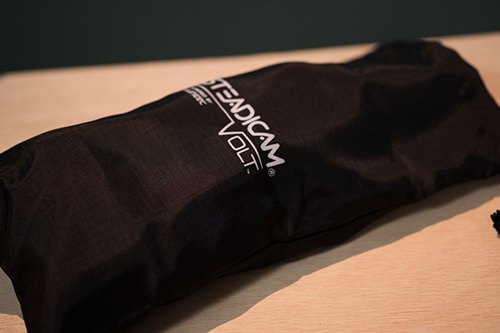 We got our hands on a Volt and spent some time testing it, and it’s a major upgrade over competitors because of that design decision, where the motors assist you but don’t do all the work for you. Choreographing a shot as a solo operator is much easier than coordinating with an assistant, and this freedom lets the operator choose when to pan or tilt the camera deliberately without trying to trick the gimbal into doing it and living with the somewhat unpredictable results.

While we’ve primarily used it for pre-visualizing blocking on shots that would eventually be executed on another device, if you are planning a production that will be shot entirely on a smartphone, the Volt is definitely the stabilizer that is going to give you the best combination of user input and motor support. The Volt takes a little longer to learn how to use because you need to practice keeping your body steady and giving gentle input to the sled, but the extra effort will reward you with more sophisticated and controllable movements as a result. 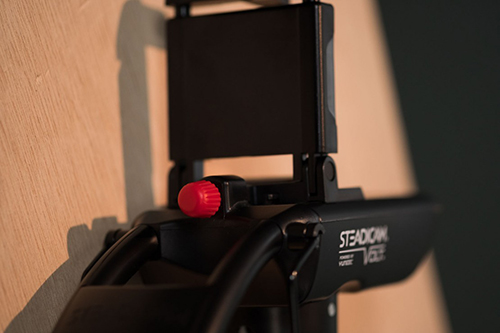 As a previous operator of a full sized Steadicam rig, the Volt is also the stabilzer I would recommend to new users to practice their operating skills in the hope of eventually graduating to more sophisticated rigs. By using the Merlin design, which uses sled input and weighting in a way that echoes the larger Steadicam units, new operators are much more likely to learn muscle memory that will help them as they graduate up the operating ladder. 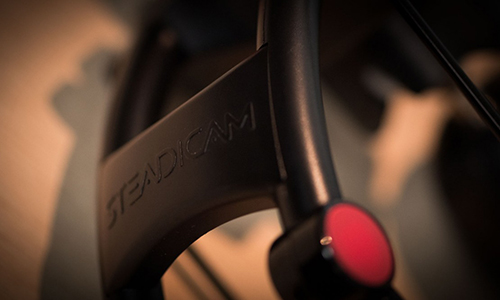 The Volt has some drawbacks. For instance, if you want to mount your camera to the Charters Pole for a sweeping vista that cranes down to a close up, the Volt won’t work. It needs input at the sled to operate, and you’ll be better off sticking something like a Snoppa or an Osmo out at the end of the pole.

The Volt also uses plastic that just doesn’t feel “professional,” but instead feels more like the plastic your clock radio was made out of in the 1990s. In reality, the plastic is plenty strong and seems to be super durable. We’ve kept the Volt stored in its soft cloth bag in our scout bag for a while and it has survived just fine. The Volt’s plastic just doesn’t feel quite as polished and tough as another plastic or metal might. However, the company managed to bring it in at the exact same price as a Merlin, only with motorized gimbals. The cost savings had to come somewhere, so if the plastic is what allowed the company to hit the price point, provide the motor assistance and deliver great shots, it feels like a fair balance.

We wonder if a “Volt Pro” around $1,000 and capable of carrying mirrorless cameras with a metal or nicer plastic chassis will come out in a year. That speculation shouldn’t make you avoid this unit, however, since its purpose (amazing smartphone and GoPro shots, being a gimbal you can constantly keep with you in your kit) is distinctly different from what you want and expect from the bigger units.

Steadicam has been the biggest name in stabilization for 40 years, and while Steadicam wasn’t first into the market with motorized stabilizers (the MoVi from FreeFly really popularized the technology), we’re excited to see this pioneer move into the space by adapting the tech from its earlier designs. As other gimbal makers build vests to try and hold their gimbals, Steadicam is moving in the other direction, incorporating motorized gimbals into its designs to assist camera operators with products like the M1 Volt. It’s a sophisticated strategy that still allows for a lot of user interaction between the operator and the camera.

The Steadicam Volt for smartphones and GoPro is available now at B&H for $199.