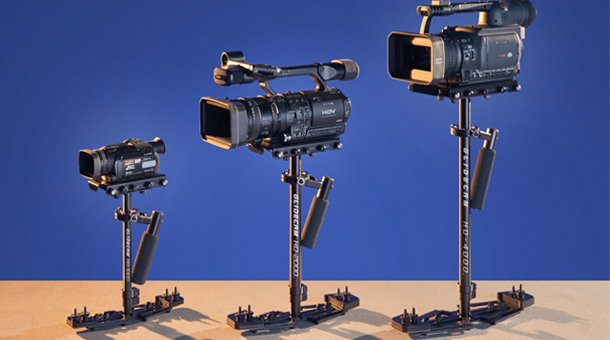 Balance and setup
Setting up the Glidecam HD-2000 for the first time was an absolute breeze. The first thing I did, was mounting the camera (Sony NEX-FS100 with the 16mm f2.8 pancake lens and ultra wide converter and a smaller NP-F770 battery, without the side handle attached to the camera) on a Manfrotto (MN-357) Sliding Plate Adapter. Then I tried to find the center of gravity and marked the spot underneath the sliding plate. This spot should roughly be placed on top the central post. You do this by attaching your camera (or in my case with sliding plate adapter attached) to the quick release plate of the HD-2000. After that, you can start the balance process. I started out with the side handle attached to the camera and used 3 counter weight plates on each side of the Glidecam. By telescoping the base platform in and out I got the right drop time and was able to fly the camera within minutes after unboxing everything.

After flying the Glidecam for a few minutes my arm started to get tired and I decided to remove the side handle from the FS100. Now I could take one counter weight plate off on each side of the base platform (4 counter weights remaining) and telescoped the post further out, until the desired drop time was established. Re-balancing the camera on the camera mounting platform, was also very easily done thanks to the front to back and side to side movement adjustment knobs. Although two counter weight plates and the FS100 side handle don’t have a lot of weight to them, it made a big difference when holding the Glidecam.

Filming on location with the HD-2000
After I became familiar with the HD-2000 and how to operate it, I decided to ‘take it out for a spin’. Location I choose to shoot was the Clingendael Park, an old landed estate, with a Japanese Garden which is only open for 5 weeks a year. It was a very warm day (35 degree celsius / 95 Fahrenheit) and to make matters worse, one of the locations I choose to film was being watered with big sprinkler systems that made it impossible to shoot there. Nevertheless I was able to get some nice footage at other parts of the Clingendael Park. While I was filming with the Glidecam, I was also being filmed for some ‘behind the scenes’ footage. This was done with the Sony NEX-5N.

You will also see some footage being filmed from the base platform of the Glidecam looking up to the camera. This was done with an iPhone which was simply attached with two elastic bands. What makes it cool, is that you can actually see the camera fly freely through the air and also how the Glidecam is being controlled. The only thing I had to do was placing the camera further back with the sliding plate to compensate for the new weight (iPhone) on the front. This made the HD-2000 slightly more bottom heavy then the desired drop time of 2 / 3 seconds, but it was still easy to fly.

Here you can see the Glidecam HD-2000 in action with the NEX-FS100 and below that, the resulting video.

Conclusion
The Glidecam HD-2000 is build like a tank, yet remains sleek in design. It’s easy to balance a camera on it and the precision three-axis Gimbal does a fantastic job on isolating the camera from camera shakes, bumps and jitter. One of the things that I noticed (and loved) the most, was how good the Glidecam works on a windy day. The camera stays controllable without having to use a lot of force to keep the camera aimed at the subject.

If you’re planning on using a stabilizer for professional use, I would like to suggest to take some time to really get familiar with it. It’s not something you can just expect to pick-up with zero experience and immediately get great results with. It takes some practice and getting used to, but it’s definitely worth the effort! Don’t let the time, that’s necessary to ‘master’ the stabilizer, frighten you. It’s great fun to work with and before you know it, you’ll have some fantastic footage to show.

The Glidecam HD-2000 is an amazing stabilizer which I highly recommend to anyone who’s interested in adding flying shots to their videos.

—
A big thanks to Thomas Howie, Vice President of Sales & Marketing from Glidecam and René Shoukier from A.F. Marcotec for making this review possible!