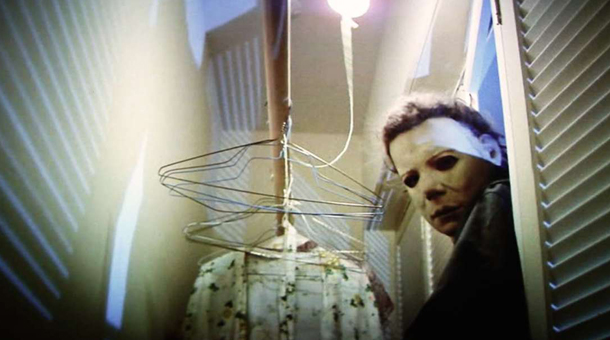 It doesn’t matter how many times you’ve seen it; John Carpenter’s Halloween, which was released 40 years ago, will always be required viewing for the holiday for which it’s named. Here are 15 things you might not have known about the film.

1. IT TOOK LESS THAN TWO WEEKS TO WRITE THE SCRIPT.

Director John Carpenter originally intended to call his movie The Babysitter Murders, but producer Irwin Yablans suggested that the story may be more significant if it were based around a specific holiday, so the title was changed to Halloween. Carpenter and co-screenwriter Debra Hill wrote the original script in just 10 days.

Jamie Lee Curtis was initially interested in the role because she loved Carpenter’s 1976 film Assault on Precinct 13 and went on to audition for the part of Laurie Strode three separate times. Carpenter initially wanted actress Anne Lockhart for the role, but cast Curtis after her final audition, where she nailed the scene of Laurie looking out her window to see Michael Myers in her backyard. Curtis has reprised her role as Laurie several times in the near-40 years since the original film’s release, and also lent her voice in an uncredited appearance as a phone operator in Halloween III: Season of the Witch (the pseudo-sequel that did not feature the Michael Myers storyline). In 2018, she’ll play Laurie again when David Gordon Green will add yet another film to the franchise.

3. IT WAS SET IN THE MIDWEST, BUT IT WASN’T SHOT THERE.

Though Halloween is set in the fictional town of Haddonfield, Illinois, it was shot on location in South Pasadena and Hollywood, California. If you look closely, you can see palm trees in the backgrounds of some shots, like the scene above where Laurie walks Tommy Doyle to the Myers’s house. Haddonfield is named after co-writer and producer Debra Hill’s hometown of Haddonfield, New Jersey.

4. THE PRODUCTION WAS INCREDIBLY SHORT.

The 20-day shoot commenced in the spring of 1978 and the film was released in October of the same year. The seasonal restrictions created some interesting hurdles for the production—dozens of bags of fake leaves painted by production designer Tommy Lee Wallace were reused for various scenes. Others may notice that the trees that line the streets of the fictional Haddonfield are fully green instead of autumnally colored. Carpenter initially wanted to somehow change the trees too, but budget restraints kept him from making them seasonally correct.

5. THE SCRIPT DIDN’T CALL FOR A SPECIFIC KIND OF MASK.

The mask for Michael Myers was only described as having “the pale, neutral features of a man,” and for the movie the design was boiled down to two options: both were cheap latex masks painted white and bought for under $2 apiece at local toy stores by Wallace. One was a replica mask of a clown character called “Weary Willie” popularized by actor Emmett Kelly, and the other was a stretched out Captain Kirk mask from Star Trek. Carpenter chose the whitewashed Kirk mask because of its eerily blank stare that fit perfectly with the Myers character.

6. CARPENTER NAMED MANY OF THE CHARACTERS IN HALLOWEEN AFTER ACQUAINTANCES OR INFLUENCES.

Michael Myers came from the British film distributor who helped put out Carpenter’s previous movie, Assault on Precinct 13, in the UK, while Laurie Strode is named after one of his ex-girlfriends. Tommy Doyle is named after a character from Alfred Hitchcock’s Rear Window, and Sheriff Leigh Brackett is named after sci-fi novelist and screenwriter Leigh Brackett, who wrote classics like The Big Sleep, Rio Bravo, and The Empire Strikes Back.

The Panaglide was a competitor to the now-ubiquitous Steadicam, which allowed the camera to be fitted to a camera operator for far-ranging and smoothly unbroken shots. Carpenter loved it because he could shoot copious amounts of footage in one day to make up for the film’s minuscule $300,000 budget. Halloween was among the first films to use the Panaglide, alongside films like Terrence Malick’s Days of Heaven. Check out director of photography Dean Cundey’s original camera tests for Halloween using the rig above.

8. ONE CHARACTER WAS NAMED AFTER ANOTHER FAMOUS MOVIE CHARACTER.

Donald Pleasence’s character, Dr. Sam Loomis, was named after the character of the same name from Alfred Hitchcock’s Psycho. Curtis’s mother, Janet Leigh, appeared in Psycho as Sam Loomis’s girlfriend Marion, and was killed in the film’s famous shower scene. For the Loomis character in Halloween, Carpenter originally wanted either Peter Cushing or Christopher Lee, but both passed on the film because the pay was too low. Pleasence would go on to appear in four Halloween sequels, concluding with Halloween 6: The Curse of Michael Myers, which was released after his death in 1995.

9. MOST OF THE MAIN CAST PROVIDED THEIR OWN WARDROBE.

Curtis bought her costumes at JC Penney, all for under $100.

One of the scary movies that Lindsay Wallace watches on TV is the 1951 version of The Thing (a.k.a., The Thing from Another World). Carpenter would later remake The Thing in 1982, though his version is more heavily based on the source material: a 1938 novella by John W. Campbell Jr. called “Who Goes There?”

Michael Myers was primarily played by actor Nick Castle, who was Carpenter’s friend from USC film school and who would go on to co-write Carpenter’s 1981 film Escape from New York, but was also played by production designer Tommy Lee Wallace whenever needed. When Myers is unmasked at the end of the film, he is played by actor Tony Moran who would go on to appear in guest spots on TV shows like The Waltons and CHiPS. Moran was paid $250 for a day’s work and a single shot in Halloween.

Halloween fans looking to see the Myers home in its original location are out of luck: In 1987, it was relocated from its location at 709 Meridian Avenue in South Pasadena, California, after it was slated to be demolished. The home is now located at 1000 Mission Street in South Pasadena, and it won’t be going anywhere. The home was named a historical landmark in the city of South Pasadena, not only because of its cinematic history but also because the house itself dates back to 1888 and is thought to be the oldest surviving residential structure in the city.

13. AT THE TIME OF SHOOTING, THE HOUSE REALLY WAS ABANDONED.

The scenes of the Myers house looking dilapidated were actually how the crew found it and they shot it as is. It wasn’t until the last shot on the last day of production (which is actually the first shot in the movie) that the entire crew banded together to paint the house and dress it with furniture to make it look lived-in.

14. CARPENTER COMPLETED THE ENTIRE SCORE FOR HALLOWEEN BY HIMSELF IN ONLY THREE DAYS.

The director usually does all the music for his own films, and his theme for the movie came from a simple drumming exercise for the bongos that his father had taught him when he was a child.

To fill a two-hour time slot needed for television broadcasts of Halloween, Carpenter filmed additional scenes during the production of Halloween II (which Carpenter co-wrote and co-produced, but did not direct) that primarily featured Donald Pleasence and Jamie Lee Curtis. The new scenes include Dr. Loomis at a hearing to review young Michael’s incarceration at the sanitarium and confronting a young Michael in his room, Loomis discovering Michael has escaped and scrawled the word “Sister” on his door, and a concerned Laurie asking her friend Lynda about the man she keeps seeing around their neighborhood.