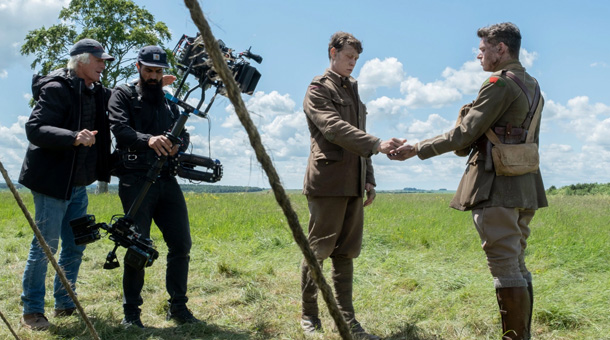 Cinematographer Roger Deakins and camera operator Charlie Rizek discuss how the Trinity was used to pull off some of the more difficult shots.

Regardless if you think the long, continuous take illusion of “1917” is immersive brilliance, or gimmicky showmanship, it’s hard not to be impressed by how the camera moves so precisely, in seemingly every direction, yet is able to consistently reframe to create the same level of compositional exactness that has defined cinematographer Roger Deakins’ storied career. There is also something distinctly human about the camera movement in “1917,” which never feels like it was executed in a computer game engine or by some robotic device.

“It has the movement of feet and breathing and steps, which I like,” said director Sam Mendes in an interview with IndieWire. “It’s a soft handheld feeling at times, but it’s very subtle. And other times the frame is very, very still and composed. It never felt arid and sort of bloodless, and we didn’t want it to feel like it was being controlled mechanically. I think that one of the things I feel most delighted about with the film is that Roger found a way to do that in a way that was pleasing to both of us, and yet kept complete control over it, which was remarkable. I think that is, in large part, the particular mixture of the [camera] rigs that Roger selected.”

Deakins utilized four different stabilization rigs, including a traditional Steadicam, on “1917,” but it was his introduction to the Trinity system that made the unique movements in “1917” possible.

“The Trinity was kind of an eye opener,” said Deakins, who was shown the rig in Munich when he visited ARRI to prepare for “1917.” “It’s the direction I believe stabilizing systems are going to be moving, I really think that’s the future.”

The Trinity is a unique hybrid rig that combines traditional mechanical camera stabilization with gimbal technology to give the camera arm an incredible range of movements not possible with a Steadicam. ARRI bought the technology in early 2016 when it acquired founder Curt Schaller’s company. Below, you can watch Schaller demonstrating the rig at NAB just weeks after the ARRI acquisition.

“Obviously the thing about the Trinity is the ease with which you can move up and down; you can do a shot that flows,” said Deakins. “For instance, you can be on someone’s feet walking and go up to their back and around to the front. There’s an enormous amount of things you can do that you can’t do with a Steadicam, and if you were doing it on a [crane] with a remote head, it would take you an enormous amount of time to lay the track.”

That ability to boom up and down was invaluable in “1917,” where the camera follows soldiers climbing over trenches one minute and crawling through mud the next. One key scene early on where the Trinity proved its worth finds the two lead characters navigating No Man’s Land. The physical challenge was not only in keeping the camera with the characters as they’re crawling, running, and eventually diving into a crater, but to reposition the camera and change the compositional relationship between the camera, character, and landscape based on Mendes and Deakins’ needs.

“As a camera operator it’s all about camera positioning,” said “1917” Trinity operator Charlie Rizek. “You move the frame up three inches or down three inches; that can convey a different feeling in the frame you are trying to compose and that’s where the Trinity, as an operator, gives you this whole range of camera placement in front of you. You have two meters in front of you, or to the side. It just gives you greater flexibility in terms of camera positioning.”

In talking to ARRI employees and other camera operators about the Trinity, there is one large barrier to the vanguard technology: It requires a seasoned, skilled operator. Deakins concurred: “The thing about the Trinity is very few people can use it, and Charlie is amazing.”

Rizek was a Steadicam and gimbal operator when he first started learning the Trinity in 2017. He told IndieWire it took him a solid seven months of practice before he felt he had a serviceable level of control over the device. It’s a skill he is still constantly learning and sharpening, never more so than on “1917.”

“Most of the shots we did with the Trinity on this film were things I’d never done before,” said Rizek. “Almost every shot that Roger and Sam would block and stage, it’s just using the Trinity to its maximum capabilities and then some. There was never anything like ‘1917,’ and I’m not sure there’s going to be anything like it for a while.”

Rizek started working with Deakins early in prep. At the beginning, they would set up at the rental house trying out movements, navigating around cardboard boxes, as Deakins got a feel for when and how to use his new rig. Instantly, the cinematographer latched onto how the Trinity didn’t have that floating feel of a Steadicam. Not only did it supply the ability to easily and precisely transition to the right camera position, it had the weight and gravity of a dolly or crane shot.

“It’s a little bit more stable, there’s less floating in the frame, where the camera [is] on a stabilized head,” said Rizek. “It was a good system to use on the intimate scenes where the camera had to move slowly, or to hold the frame in a locked manner, be able to do a slow push — these scenes are where the Trinity was decided to be used more than you’d imagine.”

The scene Rizek recommends rewatching if you want to see the Trinity used to its fullest is when the plane crashes. The Trinity was employed throughout that scene at the farmhouse, all the way up to George MacKay’s character boarding the truck.