Home Articles How I Shot A Corporate Promo Video 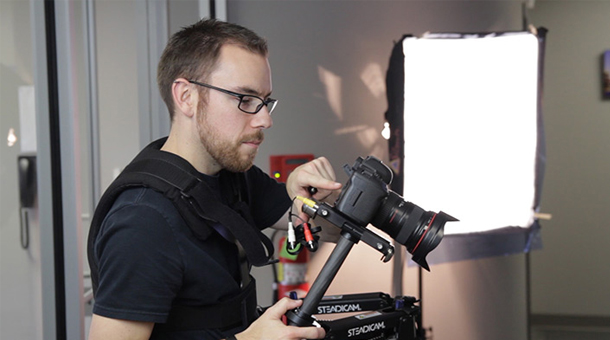 Back in October, the local headquarters of a global company that specializes in industrial automation hardware and software solutions contacted me. Over the next several months, I put together a production plan for this company and we agreed on what they wanted for a final product. This video is a behind the scenes look at our primary shoot day. Click on to read about how I used different tools to create an engaging video for my client.

Going in to the shoot, we had a shotlist of about 30-40 different shots we wanted to capture, and only one day to do it. (I used the production documents that I outlined in another post to keep things in order!) We originally wanted two shoot days, but to keep everything within the budget, we had to cut some of the other fun stuff I had in mind. I put together a crew with different sets of specialties, so that the final footage would show a variety of unique shots and keep it interesting. Having an engaging, moving video was important to my client, so adding energy to scenes through action on camera or unique camera moves was something that we needed to make happen. 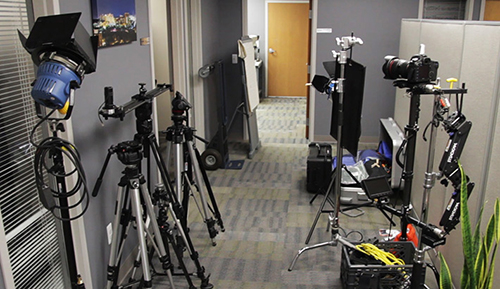 Timelapses
The ace up my sleeve was my good friend Seth McCubbin, who specializes in timelapse work. This guy is a genius when it comes to figuring out the math behind executing motion timelapses that will yield good results. Figuring out all of the numbers for a proper timelapse can be tricky, starting from the final desired length of the video clip, to considering the length of the track for the timelapse move, then determining the length of the exposure… it’s enough numbers to make your head spin.

I looked into the Dynamic Perception setups, but ultimately I found that instead of purchasing, I could rent a Kessler setup from RentKessler.com at a pretty reasonable rate. I armed Seth with a Pocket Dolly equipped with an Elektra Drive and an Oracle controller for his motion timelapses. I used this setup as well for real-time moves, but it would have been just as easy to move the camera by hand if I didn’t have the motor/drive system. 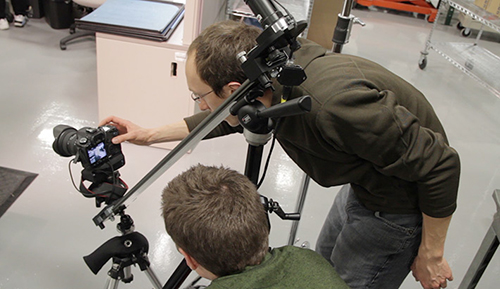 The DSLR we used was a Canon 40D, with the Tokina 11-16 lens for most shots. We disconnected the lens slightly so that the exposure wouldn’t flicker. I did post work in Lightroom and exported each series as JPGs and brought them into Premiere.

As you can see in the video, we set up the motion slider system around the area we came to call the ‘assembly line’. We wanted to activate the space and add some motion to create some energy in the assembly process. Since it really is a process and can take a while to put together products, what better way than a timelapse to show it off? We shot about 4 motion timelapses, but were only able to use a couple of them in the final edit.

Let me just say that planning is CRUCIAL when shooting timelapse sequences as part of your day- you have limited time, and if something goes wrong, you’ve just potentially blown hours of work. Don’t be that guy. It really helps to have at least 2-3 people working on a timelapse setup. Not only on the technical and rigging side, but also directing any victims or I mean volunteer talent, as they will need to ‘act’ for an extended period to give the needed motion to the shot. Most people don’t comprehend how this kind of thing works, so coaching them becomes exceptionally difficult. 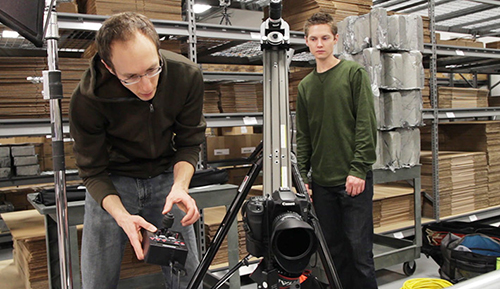 A note about working with motion timelapse systems: I spent about 3 hours working with Seth to study the rig and run it through it’s paces, and in the end we still had some difficulties using the control system. There is a definite learning curve. If you want to start working with these tools, I wouldn’t even try until you’ve had some coffee, watched a bunch of the videos from KesslerU, and read some of the stuff put out by Preston Kanak on motion timelapses. Prepare your brain!

Shooting with a Steadicam
I’m definitely a fan of adding an extra dynamic element to video clips, and that floaty-dreamy feel of steadicam shots just does it for me. If you shoot weddings, you probably know what I’m talking about. Working with DSLRs instead of true video cameras can be a bit tricky, but with practice I’ve been able to get comfortable using them. My rig for the shoot was a Steadicam Pilot.

Shooting wide is standard practice for me, as it will reduce minor bumps and shakes. Additionally, I feel the perspective it gives is very nice when moving through spaces. The corner distortion of ultra-wide angles can sometime be unflattering on people, so I try to limit doing this when I can. I clearly break this rule for a few shots, but both my client and I think the final images are acceptable. 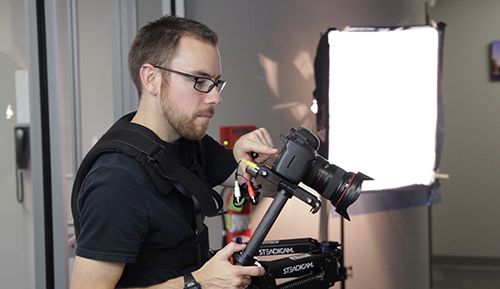 Because of the long walkways and work areas, I was able to do long walking moves in training rooms and production areas. I felt that it opened up the space and really communicated a sense of depth and size that a static image sometimes cannot. In one of the final shots of the edit, I did a ‘hero shot’ with a few of the staff members, using an orbit move to walk around them slowly while they smiled. The feeling that the move creates in conjunction with filters in Premiere really added a nice feeling to this closing shot.

A note about Steadicam flying: it’s not for the untrained. I’ve attended training workshops to learn how to properly setup and use one, and after practicing, it still can take me several takes to get one I’m happy with. Steadicam systems can get expensive, so if you want to go the cheaper route, try looking into Glidecam systems. Devin Graham has all but perfected using these for some amazing floating shots, so with practice these can really make some for some great footage.

The final video is below. Special thanks to Joshua Pardon and Jakob Skogheim for the BTS shots.