Home Blog How to build a Batmobile (camera car) 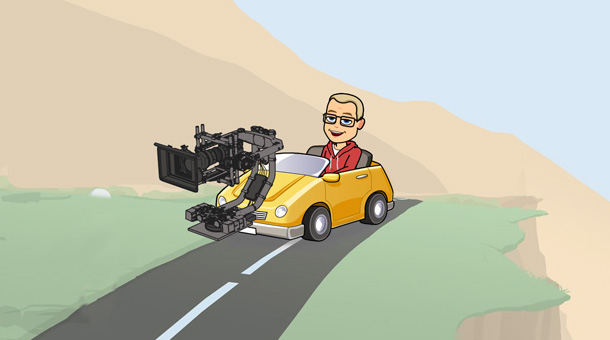 While filming the MōVI XL launch video Amber and Corey from Motionstate let me drive their Audi SQ5 with a XL mounted to the back of it. It was an incredible thrill, and we got MXL up to 113mph on a closed runway. Ever since that day I have wondered just how fast MōVI XL could go?? 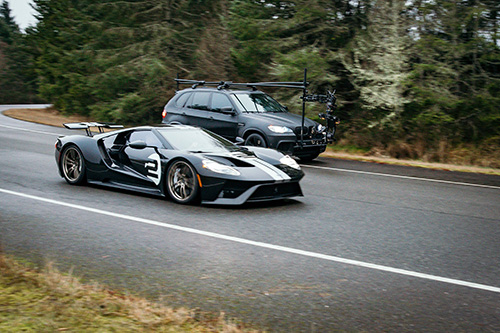 We started working on building a camera car to answer just that question. 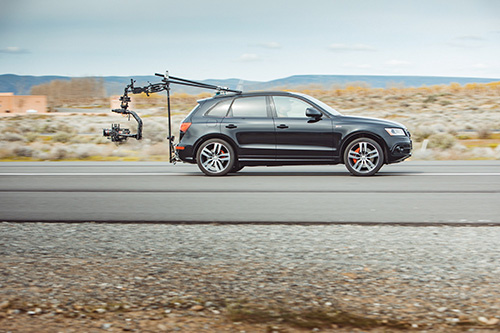 When we finished designing the Fiber Optic Gyro (FOG) upgrade for MōVI XL it was clear that we needed a way to push it to the limits. We needed to make sure it performed to our specs (plus it’s super fun). We were already abusing it on our RZR and Kuka robot, but I wanted something that could subject the gimbal to intense and sustained accelerations.

I wanted to black the X5M out to minimize reflections on set (and to make me feel like Batman). A friend recommended a local company, Vogue Autowerks. A week later my boring silver X5M looked like this! 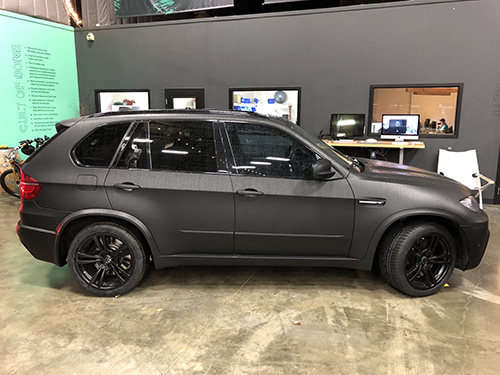 I drew up a quick sketch for rigging and then started sourcing parts. I wanted to avoid making a ton of custom parts for this if possible. I have detailed the parts I used here.

With the X5 being all black, the aluminum speed rail stands out like a sore thumb, so we took it to a local powder coater to get it matching our matte black vibe.

This setup allows everyone to have their own feed, and all monitors pull video from the MōVI controller so when we switch gimbals / setups it’s easy to change with just one SDI. We powered all the SmallHD monitors off the X5M by rigging up adapters that allow them to plug into cigarette lighters. In the future, once we really settle on a setup, we might hardwire this but it’s working great for now.

Step 4 — Isolation
We have vertical speedrail on the front and the back of the X5, allowing us to mount a Flowcine black arm in either place. We use black arm for MōVI XL, Pro, and Carbon, and it works great. The new tranquilizer vibration isolator does a great job of canceling out the high frequency vibrations and allows us to achieve a high pan stiffness for better pointing / stabilization accuracy. 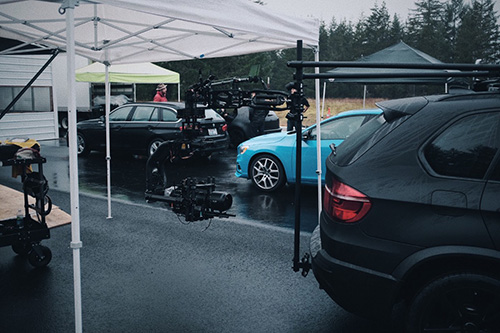 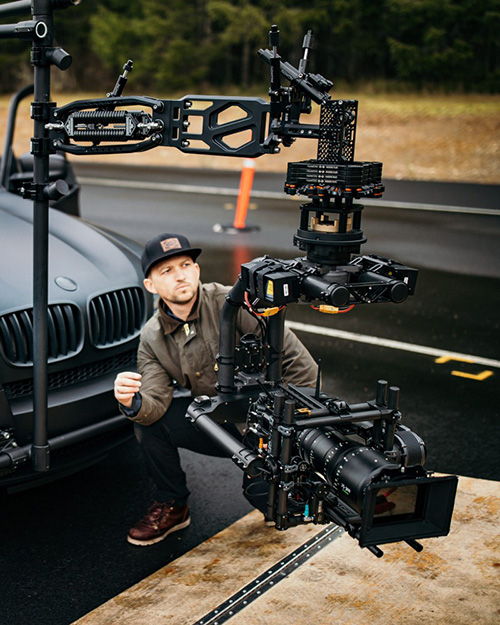 Now the fun begins! We did several shake down laps around our headquarters and then headed to a trackday that Motionstate and Rennkamera organized. We had a Washington state patrol facility to ourselves for the day, and a Mcclaren and 2017 Ford GT to film. The whole Freefly crew came out to play and antics ensued.

The X5 performed great all day. We hit 140mph (with 5 people in the car!) on the back stretch at one point and I managed to swing the gimbal back into the X5 and scratch our beautiful new wrap. Additionally a motocrane equipped GTI was on site so we had fun filming with it as well. 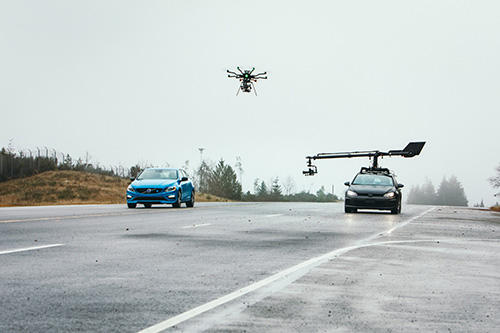 Towards the end of the day we mounted our prototype FOG equipped MōVI XL to the X5 and did some performance testing. The FOG is really incredible, the drift is so low that the only movement you get actually comes from the rotation of the earth!

Check out some of the fun we had at the track.

Adventures in Cinema
Designing, building, then filming with the X5M on track was an incredibly fun project. The team at Freefly has already put hundreds of miles in filming and demoing our cinema robots with the X5M and created many smiles, laughs, and looks of terror. Its turned out to be a very useful tool for quickly ascertaining the level of performance of our gimbals and for doing A to B comparisons as we come up with new ideas.