Home Blog How to Film Over Your Shoulder for Hours With a DJI Ronin... 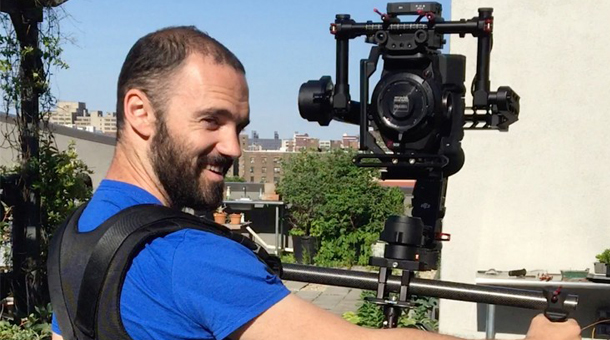 When asked to help document two guys who are walking every street in the five boroughs, I knew I’d be shooting on foot for hours—and would need a better solution for mobile interviews than a handheld MōVI.

As Riley Hooper’s DP for a video in The New Yorker, I faced a particular technical challenge. We were tasked with following two people who are attempting to set foot on every single street on the map of New York City. By the time they’re done, they will have walked past every house in New York, every apartment, every ice cream shop, you name it—over 6000 miles of streets in total.

Here is the final video, and if you want to learn more about how we did it, keep on reading:

Riley knew she wanted to capture her subjects on the job — they had to be walking. She wanted as much of a feeling of movement as we could imbue, while also being able to chat casually with each subject. The icing on the cake would be to capture a moment or two of genuine interactions with others or the environment, as they ambled the neighborhoods of NYC. Riley and I both come from a verité documentary background, meaning we’re familiar with the stoic task of hanging out for long periods of time, waiting for real life to happen. But that also means being ready for anything at any time: there are no second takes.

So how were we going to film an interview, keep the camera moving, and also grab sweet little moments as they organically unfolded? My first thought was the MōVI, the well-known camera stabilizer, and which my production cooperative Meerkat Media had recently purchased. Meerkat has had great success with the MōVI, but the maximum operating time we’ve been able to log is around 30 minutes of continuous shooting, and that usually renders the operator’s arms pretty tired by the end of it. Riley mentioned she wanted to shoot for around 2-3 hours each day, for 3 days in a row. Not sustainable with a handheld MōVI, unless we brought a body builder to set.

I began doing research into possible support rigs that I could combine with the MōVI. I’d heard that the EasyRig could support a MōVI, but my research told me that if the operator is moving, it’s very difficult to get rid of the bounce created by footsteps. I found deep into one forum that if you hang the MōVI from the EasyRig hook with 5 bongo ties, it might remove the tilt-shake, so I tried a jerry-rigged test using some grip gear in our office. However, the stretching rubber of the bongo ties didn’t work effectively enough to remove my footsteps, not to mention that it could also result in a compensation feedback loop that would send the arms of the hanging MōVI into a swinging death spiral, within head-striking distance. Not exactly what I wanted to have happen in hour 2 of a walking interview. 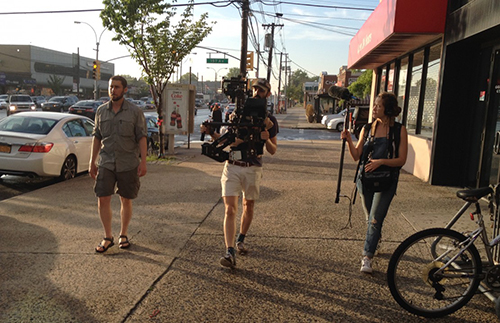 The other issue was that none of these rigs solved the problem of how to get the camera to face the walking interviewee, while the operator simultaneously moves backwards at the same speed. Even if I could walk backwards for 3 hours straight, I didn’t think I wanted to. I proposed some crazy ideas, like standing on an equipment cart with a PA to pull me — Or what about a powered wheelchair, like the kind grandpa uses? But not only did we not have budget for something kooky like that, we wanted to keep our crew and gear to as minimal a size as possible, to keep the dialogue real and let the real world penetrate the frame.

Asking around a bit, a DP friend of mine directed me to his buddy Mike at 16 by 40. Mike is a bit of a mad hatter when it comes to gear. His Facebook page has videos of him rigging stabilizers to rental bikes, and testing out reverse helmet cams of his own design. He has a personal relationship with a custom parts factory in New Jersey. His kitchen table often has a slider track on it. You get the idea.

A rig Mike invented, available for $300 on his site, seemed like it could work. He’s taken a Ronin, the much heavier competitor to the MōVI, and attached it to a traditional body-mounted Steadicam. The result is that you can operate the Ronin normally, but all the weight is supported by the Steadicam on the operator’s hips. Suddenly you can go from 30 minutes of operating time to 3 hours. My solution seemed at hand. 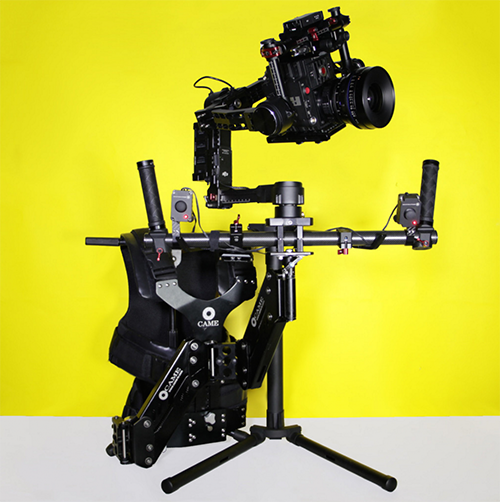 Going over to Mike’s place, I learned that the rig actually functions with the camera mounted upside down. The process is relatively simple. There are handles on the top cross bar of the stabilizer, so the first step is to flip them up so they face to the ceiling. Then you build and balance the Ronin and camera on its stand, and suit up with the Steadicam rig. So far, so normal, but here comes the tricky part: you turn on the Ronin, and once it’s stabilized itself, you slowly turn it upside down. The motors get a little confused at first, but once it’s fully upside down it readjusts itself and behaves normally again, hanging upside down from the attachment plate. With a little help, the rig is then lowered onto the custom-modified attachment peg on the Steadicam arm, and it’s ready to go.

The best part was realizing that as easy as it was to walk around with, the Ronin has the ability to rotate freely on the Steadicam peg, thus enabling me to pan the camera 180 degrees, so it faced behind me. Pushing it towards my body quickly eliminated my shoulder from creeping into frame, and also centered the weight better on my body. We went up the roof to test out the feel of it and it quickly proved to be effective. I sent some test footage to Riley, and we were good to go!

Actually using the rig on the shoot proved to be a new challenge, but one that we were able to address pretty easily. I think the Ronin’s best feature is that it was able to reset and rebalance without needing to be on its stand. Most stabilizers are going to need to be reset from time to time — either the batteries run out, or something goes wrong and the device gets confused. When we swapped batteries on the Ronin, I simply held the camera in place with my hands (upside down and attached to a Steadicam, mind you), and as it re-initialized, it was balanced just as well as before. Even the motor stress indicators on the mobile app were consistent, so I knew I wasn’t going to wear out the unit’s motors. Without this function, our shoot would have been much more difficult, if not impossible.

We rigged our Odyssey 7Q to the cross bar on the Ronin, which was at waist-level, and enabled me to monitor frame while also keeping an eye on the sidewalk in front of me. We used a Canon C100 Mark II, and a Canon 17-55mm stabilized lens. And Mike threw in some high fidelity thumb rockers that allowed me to control pan, tilt and yaw on the fly. 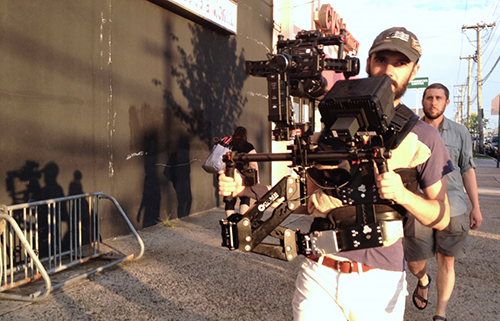 One challenge was that frequently we’d have to turn around to follow our character as he approached a person on the street, and I’d have to pan the rig on its axis 180 degrees, switching quickly to shoot facing forward, and ogling the camera monitor upside down. The rig worked fine facing this direction as well, but it was an interesting mental switch — a little like jumping from Nikon to Canon lenses, and reminding your muscle memory to adjust focus in the opposite direction. Probably would have been nice to have an extra camera on set for those moments, to be honest!

We chose the C100 Mark II in part for its continuous auto-focus, which I’ve used effectively while shooting in corporate environments, tracking in front of someone as they walked forward. However, the auto-focus is not so smart on the streets, especially at the distance we maintained, as it sees all the detail behind the person and tries to focus on that instead (even with the person smack in the middle of the focus window). To compensate, I stopped down as much as possible, which actually matched the look we were going for, in that the world around each walker was as much a character as the individual himself.

As we wandered around town with our subjects, sound operator Lindsay Cordero deftly boomed when she could, dodging plants and garbage cans and passersby, and Riley walked alongside camera, to simulate the look of a typical interview using an eye-line slightly to the side of frame. We strolled around town with a svelte crew of 3, on one day for over 5 hours straight, and captured whatever came our way. 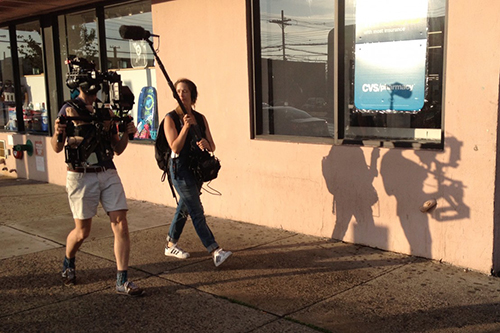 I did look like a crazy cyborg, but it never seemed to interrupt the realness of the world, in part due to the camera facing backwards. By the time any camera-gawkers were in frame, they just appeared as if they were looking at the guy we were shooting, who was in between them and the lens. And of course, when you’re shooting in NYC, people don’t care about your camera anyway, you’re just one more weirdo on the street — gotta love disinterested New Yorkers!

The completed piece has genuine moments, never stops moving (just like the director wanted), and is a testament to what a small crew and some resourceful thinking can accomplish.