Home Articles How to Light a Single Take Steadicam Shot of a Rube Goldberg... 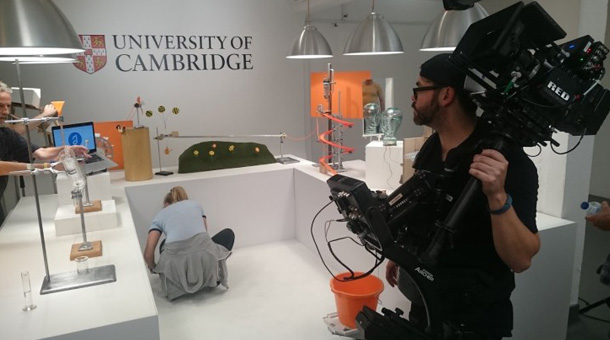 The good folks at Contra, a UK video production company that specializes in cinematic work for corporate and nonprofit clients, are at it again. This time, they’ve teamed up with the University of Cambridge to showcase the prestigious university’s enterprise program, which helps students and faculty members patent and commercialize their groundbreaking work in the sciences.

After receiving the brief from Cambridge, the Contra art department devised a Rube Goldberg machine to showcase six prominent projects that have received support from the enterprise program. To take it one step further, Contra DP John Ford decided to shoot the film in a single take.

And here’s the BTS video, which shows the work that went into making both the machine and the production run smoothly:

I had the opportunity to chat briefly with John Ford, the Contra DP who lensed this project, over email about how he brought this scene to life.

After coordinating with the art department about how to build the Rube Goldberg machine in a way that would facilitate a Steadicam operator — they went with a basic horseshoe shape — John went about figuring out how to light the shot so that the camera operator wouldn’t cast shadows during the take. 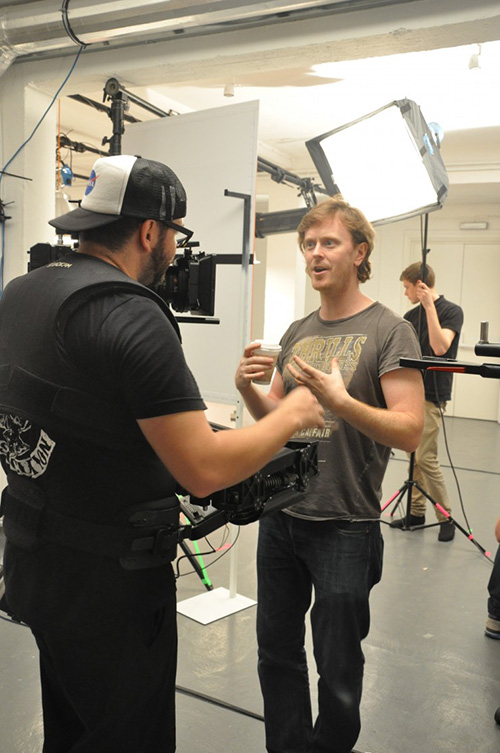 We were shooting in a photographic studio so we didn’t have much head room to rig studio lights, and I didn’t want to have ugly harsh shadows so we needed a solution that would be in the shot and create a soft pool of light around each invention.

Our solution was to use practical overhead lights using affordable Photofloods. These 200w bulbs have a great CRI and produce really crisp pure light. When we decided to insert these into large industrial factory lights, the result was a soft overhead light source that brought out each of the main ‘concepts/inventions’, without casting shadows from the Steadicam. 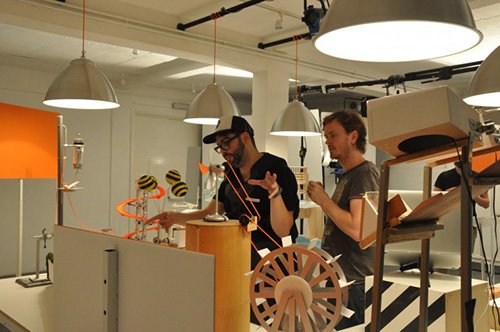 In addition to the practical overheads, John and his team used several 2K Blondes — a term used for open-face tungsten fixtures — in order to control the light levels in the background. One other practical lighting effect was used in the production of this piece, and that’s the “Enterprise” logo at the very end, which is triggered by the Rube Goldberg machine. 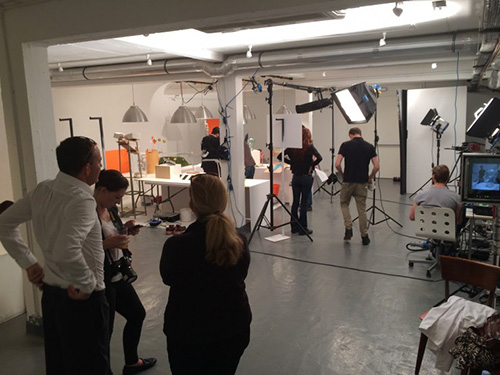 We augmented these with 3 x 2k Blondes and bounced them off the ceiling to create a perfect mid-grey background which really helped the foreground objects stand out. The final trick of the invention is a switch which triggers a Source Four with a gelled gobo, creating a lovely — and more importantly practical — logo at the end of the film.