Home Blog How We Made Akira 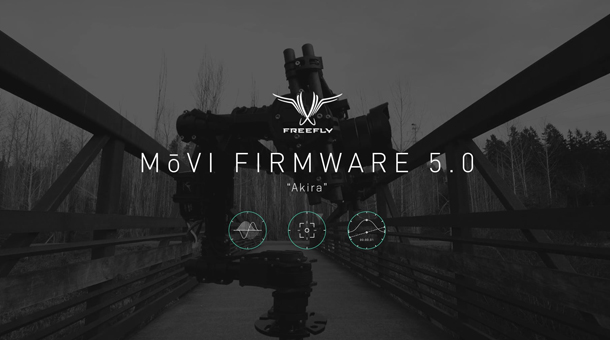 Get an inside look at the creative process we use at Freefly to develop new MōVI firmware.

Our Creative Process
One of the things I really love about working at Freefly is the diversity in skill set we have under one roof. You can find a huge range of expertise all the way from ultra-high-speed control loops to incredible cinematographers and finely-tuned user experience experts. Working with people that are truly pros at their craft keeps me hungry to learn and expand my own creative toolbox. It certainly can leave you feeling a bit inadequate at times, but one of the tenets we built Freefly on was to find people who were smarter and more capable than the founders and turn them loose. So far we have followed that idea and it’s allowed us to grow and develop a product line that is very diverse and complicated for a five-year-old, self-funded company. I am pretty excited to share our creative process and how we developed Akira over the course of a few years.

Feature Request / Ideas
These come from all over. They come from external customers posting ideas on our forum; they come from the internal filming team nicknamed ‘flight squad;’ and they also come from the engineers who are developing the embedded and software solutions that power the MōVI.

The best new features are usually a mixture of deep technical insight from the Engineering team and a keen understanding of user needs / experience from either internal or external sources.

Next, you can find these two detailing out the new hybrid idea on the whiteboard. Each has their own idea of the best implementation and there will often be some ‘enthusiastic’ discussion.

One thing we always try and keep in mind is solve for the customer.

It doesn’t matter what is easier for us, easier to code, easier to deliver, etc. It’s our job to put in the work to make the customer experience awesome. Sometimes this can be painful, but if we are to get to the destination that we care about (customer with a huge grin), it’s part of the process. 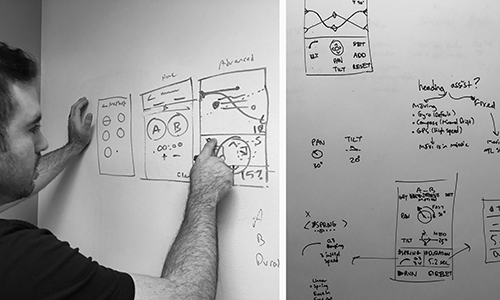 InVision mock ups
Once we have some loose agreement from the whiteboard stage on how best to move to the next step, we will usually detail out the idea in InVision to allow the team to visualize the app / MōVI interaction. After this step, we will build a rough version of the app to push to the internal testing team.

MōVI Proto App
We have a build of the MōVI App called ‘MōVI Proto,’ which comes before our beta app that we push out to our external beta testers. This app is usually broken in some way, but serves to let us experiment in the field with the new feature and allows one of the most critical steps: Somebody on the team has to create a mind-blowing shot with the new feature.

This will galvanize the team to hustle and bring the product to market.

Beta Builds / TestFlight
Once the features are ready for our beta group to test, we push a new version of the app using TestFlight. This process has been extremely useful to easily distribute and manage the beta firmware with the beta test group. It’s allowed us to get feedback from a larger user base and build confidence in new firmwares more quickly than would be possible with only internal testing.

For external customers, we solicit feedback on the Freefly Forum.

For Freefly employees, we use Basecamp to discuss individual features and offer targeted feedback. Basecamp allows us to create very granular topics for discussions and also the ability to assign those topics to the various parties that need to help push the discussion forward to completion.

We have completely abandoned email internally at Freefly in favor of a workflow that favors to-do’s and it’s been a fantastic change.

Test Shoots
Around this time, people are starting to arrange test shoots to push the new features to their limits. People are taking home gimbals at night to experiment and try to figure out new ways we might use, promote, and teach users about the features.

I spent many a late night walking around my neighborhood shooting hyperlapses during Akira development because I was so excited about the new shot possibilities and what it would mean for our customers. I am sure my neighbors think I am insane, seeing me walk laps every day with my M5 and a serious look on my face (It did spark some funny conversation where one older lady told me that my ‘contraption’ was very cool and I should start a business to sell them!).

One enthusiastic member of the team can create something awesome, and immediately get the whole company on board… It’s one of the most exciting things to be in the middle of some kind of breakthrough innovation and it’s wildly addictive.

Each of these steps builds the team’s enthusiasm and resolve to put in the work it takes to get the feature delivered to the customer. I have seen time and again how one enthusiastic member of the team can create something awesome, and immediately get the whole company on board. This happened with MIMIC, and it happened with Akira. It’s one of the most exciting things to be in the middle of some kind of breakthrough innovation and it’s wildly addictive.

iOS MōVI App
One of the things that annoyed our customers the most was our lack of early iOS support. This came from a lack of understanding on what it took to connect to an Apple device using standard Bluetooth. It required an authentication chip that we did not originally build into the MōVI. Eventually, we realized that we were not going to be able to make our Bluetooth connection work in the same way it did on PC, Mac laptop, or Android device… so we created a Wi-Fi module to allow iOS users to connect to the MōVI. We also completely updated the app to match the user experience and design that we created for the ALTA. The app is now clean, functional, and intuitive to use. 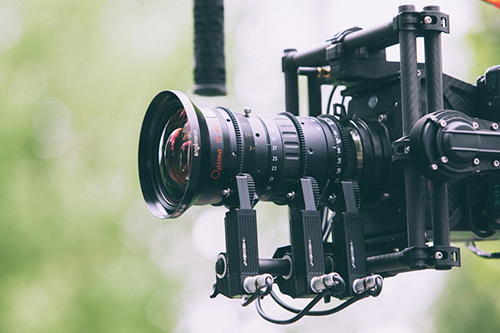 Shane worked his magic and improved the speed of the control loop by 100%. In practice, this means that we have been getting 30 to 50% higher gains. We have been consistently shooting with longer lenses than was previously possible… some early tests here. The first time Hugh and I got to test this firmware in the field we were blown away and had huge goofy grins on our faces. A big part of the performance improvement comes from the independent Output Filters, which allow you to really tune the filtering for the specific axis (since each of them needs different treatment to truly optimize performance). 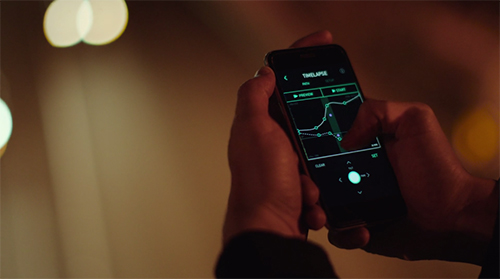 We had been playing with this mode for a few years now in an early engineering version. The foundation was there, but the improvements made with HiPer really made the Timelapse Mode shine since it was able to stabilize the camera better, which becomes even more important for time and hyperlapses. Additionally, Deniz, Brent, John and Lorne substantially improved the ease of use and app experience. With these small tweaks, it went from a back-burner feature to center stage. 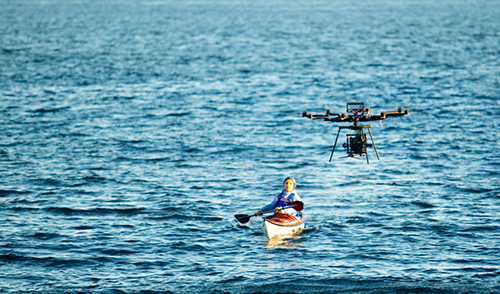 Target had been in testing for some time in various forms. It allows the user to set the MōVI to a mode where it will automatically point at the IMU on the MIMIC. This mode is truly incredible to watch when it is working properly, but it does heavily depend on the quality of the GPS signal in order to understand the relative positions of the MōVI and the MIMIC IMU that is being targeted. This is one of the reasons we use a high-performance, helical GPS antenna on our products.

Tips and Tricks
How I shoot MōVILapse

Here is how we shot the MōVILapses found in the Akira launch video:

MōVI Setup
1. Set Remote Rate Scale to 1-5 deg/s. This will limit the maximum speed the MōVI can pan / tilt in Majestic Mode. You will have to experiment with the number based on the speed of your hyperlapse and how fast you want the moves to appear when played back faster. I ended up using around 4 deg/s for many shots.
2. Set your Majestic window appropriately. I typically run with mine around 20 degrees to enable me to move around a bit as I walk without inadvertently giving the gimbal pan / tilt inputs.
3. Increase your smoothing. For the shots in the Akira promo, I was usually shooting 1FPS. Theoretically, this means to create shots that look nice at 24FPS I need around 24x higher smoothing then I would normally use. I ended up running my smoothing around 50 for these shots. This, coupled with limiting the max rate the MōVI, can pan to ~4 deg/s resulted in some smooth hyperlapse shots.

Camera Setup
1. I was obsessed with the A7s and A7Rii when we were shooting Akira, so I used those cameras for all the shots. Sometimes I used the Sony PlayMemories timelapse app to fire the shutter, and sometimes I used an inexpensive super cheapy intervalometer like this.
2. For the night shots I sometimes wanted just a touch of motion blur, which meant slow shutter. I typically used somewhere around the following settings: ISO 64000, Shutter 1/50 sec, Aperture f/5.0.

How to Move
You need to train your brain to do everything 1/24 as fast as you normally would. Try to keep trajectories smooth and ease from one move to the next over a very long time scale. You need to plan for corners a city block in advance. Remember that you will only be able to have the MōVI change its angle at a max of 4 degrees per second! For a 90-degree turn that means it will take at least 22.5 seconds!

It takes some practice, but the good news is you will be getting plenty of cardio walking around your favorite places.

Challenges
I was listening to an Adam Carolla podcast once where he cites that he is a joke factory and not a warehouse. I like to think of Freefly in the same way. We are trying to build the team, skills, and culture to constantly innovate and push the boundaries. We don’t want to just warehouse things we have done; we want to constantly tear old ideas up, and figure out what’s next. It’s this spirit that keeps us excited to come to work each day and endure the days when nothing seems to work as expected.

Thanks for giving Akira a try and all the incredibly useful feedback we have received.

Click here to get your hands on the stable release of Akira (MōVI FW 5.0).