Home Cool stuff In One Breath – Making of Russian Ark 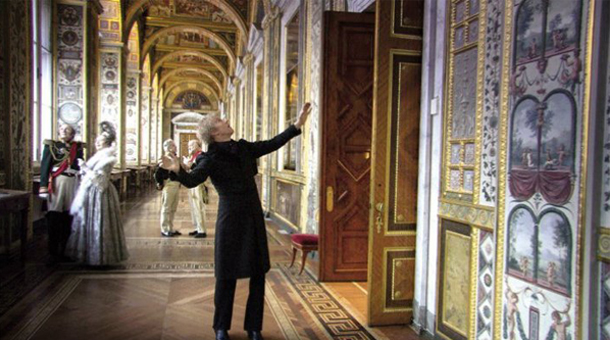 Story:
An unnamed narrator (unseen by the audience and voiced by the director) wanders through the Winter Palace (now the main building of Russian State Hermitage Museum) in Saint Petersburg. The narrator implies that he has died in some horrible accident and is a ghost drifting through the palace. In each room, he encounters various real and fictional people from various time periods in the city’s three-hundred-year history. He is accompanied by “the European” (played by Sergei Dreiden), who represents the nineteenth-century French traveller the Marquis de Custine. (The fourth wall is repeatedly broken and re-erected; at times the narrator-director and the companion interact freely with the other performers, and at other times, they go completely unnoticed.)

On a winter’s day, a small party of men and women arrive by horse-drawn carriage to a minor, side entrance of the Winter Palace. The narrator (whose point of view is always in first-person) meets one member of this party, “the European”, and follows him through numerous rooms of the Palace. Each room manifests a different period of Russian history; however the periods are not in chronological order.

Featured are Peter The Great harassing one of his generals, a spectacular presentation of operas and plays in the era of Catherine the Great; a formal court proceeding in which Tsar Nicholas I is offered a formal apology by the Shah of Iran for the death of Alexander Griboedov, an ambassador; the idyllic family life of Tsar Nicholas II’s children; the formal changing of the Palace Guard; the museum’s director whispering the need to make repairs during the rule of Joseph Stalin; and a desperate Leningrader making his own coffin during the 900-day siege of the city during World War II.

A grand ball follows, featuring music by Mikhail Glinka, with many hundreds of participants in spectacular period costume, and a full orchestra conducted by Valery Gergiev, then a long final exit with a crowd down the Grand Staircase of the palace.

The narrator then leaves the building through a side exit and sees that the building is represented as an ark preserving Russian culture, floating in the sea.