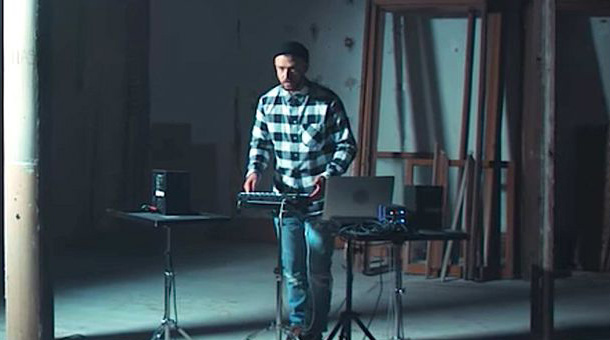 Director Arturo Perez Jr. of La Blogothèque explains how he made the “Say Something” video.

In November of last year, Justin Timberlake reached out to La Blogothèque, a Paris-based collection of filmmakers best known for Take Away shows—or live single shot videos of musicians performing in candid situations. Launched about a decade ago, some of their most recognizable work has involved Arcade Fire crammed in an elevator playing “Neon Bible,” The National performing “Start a War” around a dinner table, and St. Vincent lying on a bed singing “Marry Me.” For most of the decade, these videos have been reserved for indie or emerging artists, who have gone on to international acclaim. But when Timberlake called La Blogothèque to direct his upcoming video for “Say Something,” it marked the most expensive, ambitious, and mainstream project in the collective’s history.

“It could have been a gigantic disaster,” says Arturo Perez Jr., the La Blogothèque director who pulled off the video after weeks of obsessive planning. “A lot of the times, when you’re working with such a big artist, there’s so much to lose. And to his credit, he wanted to be vulnerable.”

When Timberlake approached the filmmaker, he knew he wanted a La Blogothèque-style video—meaning a truly live, single-shot experience. “When I hear this song, it’s the inner voice-over inside of our heads,” Perez says. So Perez devoured the new song, and came up with a plan to recreate its complex internal dialogue. He and his team picked a location: the famous Bradbury Building in Los Angeles (which most famously served as a setting in Blade Runner) with elevators, balconies, and stairs that personified the labyrinth of “Say Something.”

It took two weeks of pre-production before shooting started. “I walked the Bradbury Building for two and a half days—just walking through it like a crazy person. We walked and walked and talked about it,” Perez says. “What we didn’t want to happen was for this to just be a Justin Timberlake one-take video gag. We’ve been doing this for a while, and we don’t get high off of doing a one-take video. We get high off of creating poetry.”

The team discussed trying to do it in multiple cuts, but they ultimately decided against it. “We wanted to let this be an experience—live in it,” Perez says. So, when it came to the day of shooting, they had gathered a 200-person crew—including 17 musicians and a 60-person choir—to record the video and audio live in one single take. They started at about 11 a.m., rehearsed a few times—including moments when the elevators wouldn’t work—but only had a 10-minute window to record at night when they could capture a deep blue light in the sky through a window.

And they pulled it off in a single take.

“I’m not joking when I tell you that this is the first and only take that we did in the night time,” Perez said. “This is motherfucking Justin Timberlake. That guy is a pro. And Chris Stapleton was such a good guy. I don’t know if he knew exactly what was going on, but that guy is a performer, so he just settled back and did it.”

It’s important to note that this isn’t just video synched up with a studio-recorded track. This was an entirely live performance—video and audio. “That was a reverb challenge,” Perez says. “The building was all steel. To even do the wireless transmission was a mathematical feat. We had to record so many instruments in so many different places.”

The result is an almost unbelievable video that the casual viewer might think was done using simple filmmaking tricks. Timberlake walks through rooms and hallways, up a ladder. The camera pans to Stapleton on the other side of the side of the building before the two finally come together in a hallway joined by an entire choir. And it was all happening in the moment—a style of filmmaking that is not only difficult, but one that Perez hopes inspires a new type of experience of music videos.

“We truly believe that the next generation of great videos will be done live,” Perez says. “We’re over just seeing pretty images on the screen. Let’s go one level deeper.”