Home Reviews Letus Helix: A $5000 stabilized gimbal with a twist 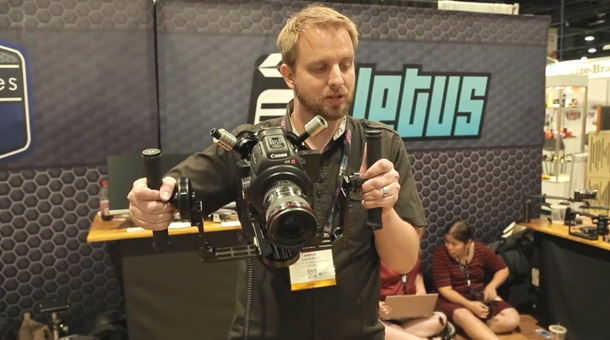 As expected we’re seeing numerous camera stabilization systems here at NAB that look very much like the Freefly Mōvi and only a few come close to the functionality of the original. But gear manufacturer Letus has something very special to show off. Their brushless gimbal system gives us a fresh look at camera stabilization.

Personally I have had a critical opinion about brushless gimbal systems due to the uncomfortable way of operation, the limited smoothness and control that some of them offer and the price tag that is often too high for me.
Letus here put their Helix system into my hands yesterday and I was immediately convinced that there is a gimbal I might like as well.

What convinced me about the Letus approach?
Well first of all I really liked the way this one is being operated differently than others. It had the C100 on it, but never the less was much lighter than any other gimbals I had held. Add to that the fact that it is a lot more compact and can be held very closely to the body which makes a huge difference in control and ease of use. It feels very light because you can keep your arms close to your hips.

What I also liked was the way tilting up and down is achieved by rotating the handle. This is a very intuitive way of controlling the camera all around, it is very direct and made it feel like there’s a lot of control.

Another thing to mention is, that while this stabilizer still makes it easier to film your talent’s hip area than an actual eye level kind of shot, the camera is higher up than on most other systems I’ve seen.

Finally, the setup was very smooth and easy to use. I liked it and I liked the price tag too. It’s estimated at $4000-$5000. While it might still be too steep for many, it is really one of the very few gimbal stabilizers I can recommend and I’d not invest into all the “cheaper” stuff out there. Nino, who has worked a lot with his Freefly Mōvi also seemed positively surprised with the ergonomics of the product and our friend Sebastién Devaud seemed quite interested in the 1-axis version which would put the twisting base onto a steadicam setup.