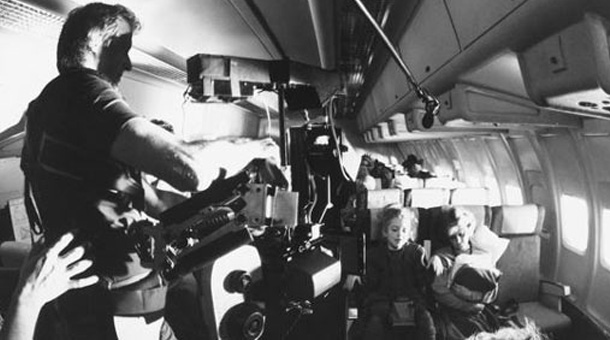 “I’ve been thinking about those days 30 years ago when all this began because I’m writing a book, a kind of a memoir about the 20 year period between getting in the business in the most idiotic way you can imagine — I read all the old film books in the free library of Philadelphia so of course I learned how to be a 1940’s filmmaker — and getting frustrated with the ancient equipment I acquired from a bankrupt local producer.

I thought you had to have a studio. I thought you had to have giant dollies and perambulator mic booms, and all of that heavy stuff. My dolly was a ‘Fearless Perambulator’ that weighed 600 lbs. Our crews were small and we broke our hearts lifting that thing into trucks and lugging that it up stairs and laying my 30 feet of rusty rails and putting my pinheaded little Bolex on this behemoth because that’s what one had to do to move the camera. I hated the bumpy look of handheld so I finally started looking for a way to disconnect the camera from the cameraman. Somehow the ever-bumpy human being camera must stay isolated from the smoothly moving camera. That turned out not to be easy, and became a three year project with a lot of false starts, which yielded some pretty goofy prototypes. We used to joke that one of them was “70 feet long and you couldn’t smoke near it”.

I tried every possible variation and finally got to one that looked like the modern Steadicam. I took it to Hollywood and almost immediately had a license deal from a camera manufacturer Cinema Products Corp.

My first day on a feature film set was on Bound for Glory the Hal Ashby directed life of Woody Guthrie; D.P. Haskell Wexler got me up on a huge Crane 30 feet in the air. You know I’d never actually laid eyes on a Titan — I’d only seen photos in the Library — and there I was, quivering like a leaf, with my prototype, to undertake this very very risky combination shot — stepping off the crane, walking through the crowd of 900 extras!… and back! The operator Haskell had sent up with me to help out, said “Jeez. that’s funny, you’re shaking but the shot is still!

Anyway, that shot was a smash hit, and then I got to work on Rocky, because the demo we had made to sell the original prototype showed my then girlfriend, now wife, running down the art museum steps.. and back up. And John Avildson, who was to direct Rocky, Avildson, saw my reel and recognised his longtime camera assistant, Ralph Hodgekiss. John called Ralph and asked, “where are those steps… and how did they do that?”

So you can imagine how supercharged this particular year was for me. I went from making Sesame Street films in Philly to being the guy with the secret weapon! And then I shot Marathon Man with Conrad Hall, so, against all odds.

I worked with some of the hottest best guys in business right out of the box. Of course it was only the bold, self-confident types that went for it at first. The conservative film making masses kind of held back and waited before jumping aboard. The rest, as has been said, was history. Haskell won the Oscar for cinematography, Rocky won best picture, Marathon Man was an incredibly stylish movie and that gave us our launch. And since then it has been and astonishing whirlwind for 30 years.

I did 100 movies with the Steadicam, and only just retired this year from actual on-set shooting.

Of course we’ve continued to upgrade the gear. It was a great shock to me when the patent expired in 1994. When it was originally filed, I was a kid and my attorney said “it will last 18 years” and I added it up – “I’ll be 58, I’ll be dead, no problem!!”

Well guess what? (does Python imitation) “I’m not dead!” I’m still here. And I’m still at it. We have a bunch of patents on cool new features, including some long-awaited and pretty astonishing stuff.

And my other chore last year was to finally develop a real Steadicam for camcorders. I had done one in 1990 called the Steadicam JR which has been used a lot but was made of plastic and therefore wasn’t particularly rigid. I always wanted it be made of metal, like my original prototype. I never expected that every dad would buy this thing to shoot his kids baseball games. One has to be interested in making videos, and to have to have an incentive become skilled with it and to make shots that have a movie-like quality. Well I’m happy to say, 16 years later, the ‘Merlin’ is here and it’s everything I hoped for. A true, precise, shooters instrument… a true Steadicam that just happens to weigh 13 ounces! I love camcorders, I love to be able to shoot without a five man crew, and If you’re clever with auto-focus you can work extremely telephoto. And so your filmic sensibilities can be liberated — without as much planning and without as much crew and so on.

But I be damned if I’m going to go back to hand-held. So that was my incentive for the original of this and it’s still my incentive.

Now, in the 21st century, there is a broad continuity of cameras. There still are the heavyweights, including now some of the largest Hi-Def 4k cameras like the Panavision Genesis – and running all the way down to the hand-held HDV cameras and all of them are capable of spectacular shots aboard Steadicams of all sizes.”