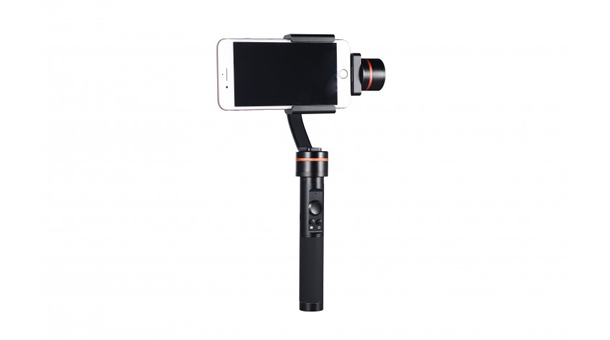 Powerful yet easy-to-use, Klick is a good starter gimbal for beginners.

If you’re in the market for a good handheld smartphone gimbal stabilizer that won’t break the bank, you might want to take a look at Klick. This thing offers some features that both casual and professional users will be pleased about. This thing is weatherproof, has pan and tilt capabilities, portrait and landscape modes, action tracking, and tripod mountable. It also comes with a dedicated app that gives you more control over your smartphone, like changing image resolution, face-tracking, and time-lapse and panorama modes.

Klick recently launched a crowdfunding campaign on Indiegogo, so check out the promo video below to learn more about it.

A few weeks ago, I was able to get my hands on a Klick and decided to run a few tests on it as I made my way up to Portland for the Portland Film Festival. I shot with an iPhone 6s and an iPhone 7 (which required the counterweight that comes in-box). I tried out its pan/tilt capabilities, which were smooth and nice, shot in the car on a particularly bumpy stretch of interstate, and you know, did the whole “I’m trying out a new gimbal” thing where you try to swivel and stir and push the unit beyond its limits. (And I managed to look like a complete tool doing it, too. So, there’s that.)

There’s definitely a lot to like about Klick, from the multiple shooting modes to its overall build, but, like anything, there are a few things that weren’t all that great in my opinion.

Pros
– I liked how forgiving the gimbal was when it came to balancing different weights. I was able to keep my iPhone 6s in its bulky Otterbox without worrying about losing performance, although, it did seem to run a bit smoother without the case.
– You can shoot in standard, portrait, underslung, and flashlight mode, and the transition between each of them is quick.
– Smooth panning and tilting with adjustable speeds.
– The gimbal is robust and feels built to last. (And it totally doesn’t care about the rain.)
– The motor is completely silent.
– Long battery.

Cons
– The gimbal controls worry me a little. The buttons don’t seem as well-made as the body and the joystick is not very easy to use.
– Mounting your phone can be really tedious, especially if you’re in a hurry.
– Action tracking may be good for some, but I found it annoying. Luckily, and this might be able to go under “Pro,” you can switch it off or adjust its speed.

The glaring omission here is the mobile app. I wasn’t able to access it and try it out, so the value of its functionality is still a mystery to me. Klick also offers a GoPro mount add-on that I would’ve liked to have tested. 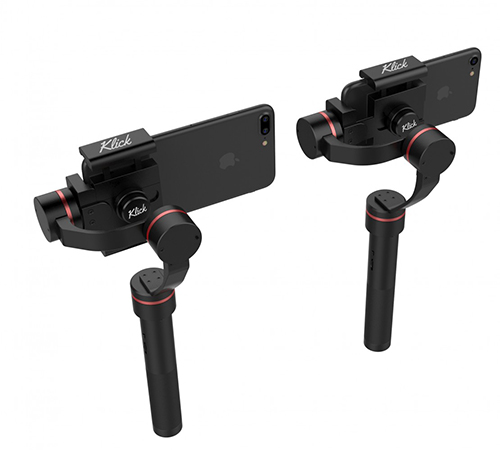 In the end, Klick isn’t offering a ton of professional features you can’t get elsewhere, though that manual tilt/pan is a hard thing to come by. What it does offer you, at least during the crowdfunding campaign, is a little bit more for a lot less, which, in my opinion, makes it a viable option. However, when that price jumps up to $299 after the campaign ends, it loses one of its most attractive features: its affordable price.

The handheld gimbal market has become saturated in recent years with devices like the DJI Osmo, the SMOVE, and a bunch of others that are floating out there on crowdfunding sites. It can be difficult to decide which ones are worth your hard-earned money, but if you’re looking for a budget-friendly unit that not only stabilizes your camera the way you’d expect but also has some great additional features like pan, tilt, and multiple shooting modes, then you should really take a look at Klick.