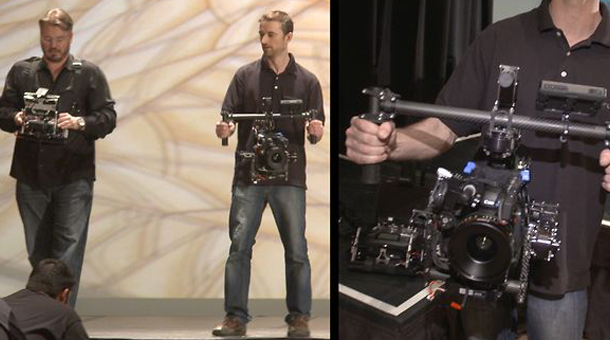 With nearly 1 million video views in under two days it’s deja vu all over again for me but just as sweet and special (and unexpected [this fast!]), and for Tabb who was featured in the video, he’s getting used to being recognized on commercial flights and contacted by old high school friends…

To share in our excitement and the overwhelming reaction by the video/film community – we’re gonna go ahead and GIVE TWO OF THEM AWAY.

Sooo… How do you qualify? Well the truth is that we’re simply too busy to come up with a creative challenge / contest / film or shot ideas right now (not to mention going through them.)

So we’ll make it super simple – simply follow BOTH @Freeflycinema and me @vincentlaforet and we’ve got a pretty darn neat way of picking the winner… it may have something to do with a remote, altitude and general craziness! It’s just that simple and necessary legal jargon: no purchase necessary to win.

More details on how to order the MōVI and additional details on the kits will be posted here in 24-48 hours.

My first memories from my childhood involve the dream of flight.

I imagine that I’m far from alone when it comes to having been terribly addicted to bolting down a hall as a child, my arms spread out like wings, and feeling the rush of gravity as I accelerated around a corner as fast as my legs could propel me, my eyes closed. The thrill of reckless abandon and the sensation of taking the tightest of turns always trumped the risk of a collision with the unknown.

Flying is about letting go.

Many of us have in the cinema industry have never truly grown up. We have found a way to hold onto our youth in flying cameras through scenes borne of our imaginations defying the laws of time and physics as we move through our frame.

But any filmmaker – professional or amateur – will tell you that gravity is all too often a cruel reminder of how hard taking flight can be. Moving a camera in a steady path is one of the biggest challenges for all of us.

That is until you hold the handheld “MōVI” device in your hands and run, or drive, or fly only to see your clumsiness and bumps turned into a near perfect trajectory – thanks to insanely fascinating technology of gyro stabilization and accelerometers. The “MōVI” produced by Freefly Systems based in Seattle WA., is a digital 3-axis gyro-stabilized handheld camera gimbal.

The completely silent device weighs under 3.5 pounds bare and can be operated solo, or with the help of a second “gimbal” operator with a joystick to pull off some incredible moves.

That’s just the beginning of what this thing can do (more to that below the jump) but for now, here’s a peek of the first shoot ever done with the MōVI – every shot was made with it, a Canon EOS 1DC and a Canon EFCine Prime 24mm 1.3 (at 1.3!) and a Zeiss 18mm CP.2 for the aerial footage:

So why do I think this is a game changer:
Some of you may not exactly get what this device does at first, why you might need it, or how you would use it. That is until you get your hands on it – and then your way of thinking about camera movement and general camera support will change. Guaranteed – everyone who’s handled the device agrees. It’s going to be difficult not to have one of these tools on your productions going forward.

This device isn’t the end of the sticks, Steadicam, slider, dolly or jib to be sure… but it sure will make you think twice about using those tools on many of your shots when you find out how quickly this device allows you to execute a similar shot but in a fraction of the time. It can literally take longer to explain a shot, than it would to execute a perfect shot with the MōVI. Heck you’ll even think twice about every using a tripod for a quick pan or tilt shot – when you realize you can do that with a “push” or a circular forward movement left (a curved dolly track…) Except you don’t need to lay track down …

The danger of this device is that you’re going to want to shoot Scorsese’s famous Copacabana shot from Goodfellas every time you pick this unit up. You’ll do well to remember that short takes and editing are the key to a nice flow in almost any piece. Yet that amazing shot you’ve dreamed of accomplishing is closer to becoming a reality than it has before. Obviously in this short my effort was to string as many long shots together as possible to show off the device – and that can be a challenge as a director.

That being said the beauty of this device is how quickly you can also make more simple shots. A push or slide is done in seconds and near perfectly. You can add a tilt or pan to that too to make it even fancier if you’d like with little effort. And the speed at which you can work is hard for many producers (including a friend and long time producer I worked with on a commercial this week… until he sees the results and how quickly you can get them.) Then you run down stairs, walk across a busy intersection, or ride in a vehicle and your head will certainly spin…

Another big factor: It will be affordable – the initial mid-level (in terms of weight support) MōVI M10 will sell for approx $15K and is already under production. The second, smaller version, the M5 that will be on sale at some point in the near future (once the production capacity is in full swing) will be sold for a price point under $7,500. If you consider how much we spend on handheld rigs, sliders, jibs (let alone Glidecams/Steadicams etc.) – the price of this device quickly becomes a no-brainer… Another huge factor: it takes quite a bit of time to set up a JIB, let alone weights, crew and skill to operate. The learning curve on this unit is very very fast.

The MoVI can travel in a thin suitcase as carry luggage and weights under 4 pounds… A steadicam is an awesome tool but takes years to master. I was able to operate this device within minutes… I will admit to having experience in operating Cineflex systems in Helicopters and Russian Arms on fast moving vehicles. And I can say that the way the joystick on the two person configuration operates is nearly identical. And the point is that the MōVI M10 is cheaper to buy with extra bells and whistles than it is to RENT a Cineflex for one day… keep that in mind and why that leads me to consider this technology to merit the dreaded and overused term: Game Changer.

The first unit that is being released – the M10 – supports a camera up 10 pounds with accessories. That equates to a DSLR with a lot of accessories or a bare Epic and prime lens. We’ve been using the Epic and the Canon primes and Zeiss CP.2 lenses all week on a commercial without a hitch. A future version the M20 is slated to support an Alexa or Epic package w/ zoom, price and date TBD. The guys behind this work with Epics and Alexas on a regular basis and are cinema guys. Tabb Firchau & Hugh Bell have worked on several productions with me (JOB, Mobius) and Hugh is one of the best steadicam operators I’ve worked with in the industry. The point is that these are passionate cinema people who are going to cater to what we need as filmmakers.

If you’re going to NAB you’ll want to look up Freefly Systems as they will be exhibiting these models live at their booth (#C9848) next week.

Paying it forward:
I also wanted to try something a bit different here. At first I thought we’d put additional content up for a small charge and throw a party for the crew or pay them a bonus – but I didn’t like the precedent the former option set. Therefore we’re also throwing up a downloadable “Pay Per View” version with the help of Vimeo – All proceeds from the sale of the video will go to a charity on behalf of the cast and crew. The Charity is called the “Lollipo Theater Network” (http://lollipoptheater.org) and brings the magic of movies currently in theathers, to children that are confined to hospitals nationwide due to chronic or life-threatening illnesses.

The downloadable video includes another never before seen shoot with the MōVI outdoors shot on the Panasonic GH3, along with that will be 3 full ungraded extended takes from MōVI shot with the Canon EOS 1DC in Canon C-Log, as well as a director and inventor’s commentary for the short. The Vimeo On Demand footage is available for download for $3. It goes to a good cause so if you’re interested click on the following Lollipop Theater Piece Link here.

I’ll be posting tomorrow a bit more about my experience with the MōVI as well as the gear we used. I’ll discuss more in depth what the pros and cons are of the system and what to expect. A skilled 1st AC will become your new best friend and wireless focus devices (which are getting much more affordable by the day) will become necessary tools for fancy moves. Keep in mind that this entire pieces was shot at T 1.3 on a 24mm… yeah Crazy!

I’d like to thank the incredible cast and crew not to mention those in post who made this piece happen.

For now I want to get this up ASAP – so I’ll stop writing. More to come tomorrow! To see what this unit looks like on one of their RC Helicopters… check out the video below….

Read below for a press release with more technical details:
( 4th April 2013, Seattle) – Movi M10 – Introducing a family of 3-axis digital stabilized camera gimbal, so advanced, it redefines the possibilities for camera movement. The heart of the gimbal is Freefly’s proprietary high performance IMU and brushless direct drive system. The gimbal is 100% custom designed in-house by our engineering team. No compromises were made to accommodate off the shelf brushless motors, motor drives or IMUs. Creating the gimbal from scratch allowed Freefly to precisely execute our vision for the next generation of stabilized camera gimbals. In creating this camera gimbal we aim to empower a new era of stabilized cinematography. Freefly MoVI – “The New Moving Picture.”Design & Performance – Lightweight, agile, rigid – these are the words you hear day in and day out at Freefly research and development lab. Freefly began its business building aerospace and UAV products where every gram counts. We have carried this design ethos into our cinema products. In an industry where weight was once considered an advantage, we instead built one of the lightest weight, highest performance, cinema ready 3-axis gimbals the industry has ever seen. This allows the operator to run faster, jump higher, and capture more compelling footage than ever before.About Freefly – Freefly represents the intersection of art and technology. Our team consists of industry leading specialists all focused on one task – inventing solutions to allow unrestricted camera movement. Freefly initially created the CineStar line of multi-rotor camera platforms, which allowed smooth, stable and dynamic low-altitude aerials. After years of research and development in camera stability, Freefly has created the Movi stabilized camera gimbal. Our goal with the MoVI is to empower a new era of stabilized cinematography on a variety of platforms, from handheld to helicopter and everything in between.