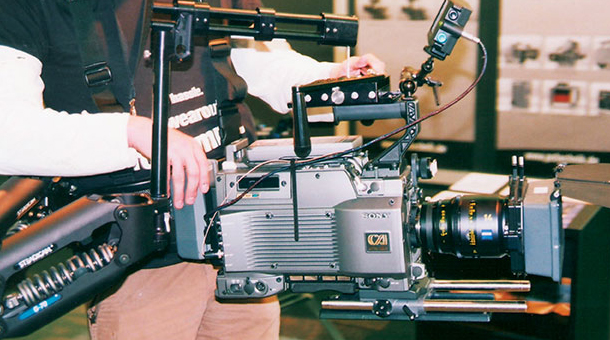 FreeFly Systems MoVI gimbal rig rocked the recent NAB Show in Las Vegas and in doing so awoke a generation of remote control aero designers in to thinking they could design a similar rig for professional TV and film use. 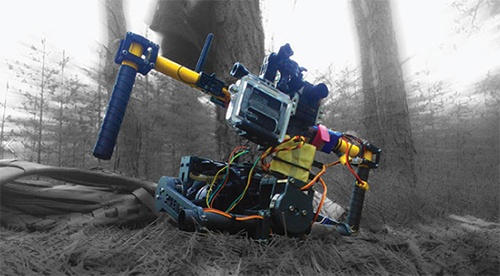 Polish company Flite (who may have Russian de-militarised tech) are showing their 2-axis gimbal. Their demo is less ‘Cool dancers in New York’ and more ‘Dog chases his tail’.

Arguably the hit of the NAB 2013, with definitely the best demo shot by Director Vincent LaForet (1,000,000 Vimeo views and counting). But where does MōVI, the exciting new 3-Axis gimbal rig, stand in the pantheon of revolutionary suppport kit? 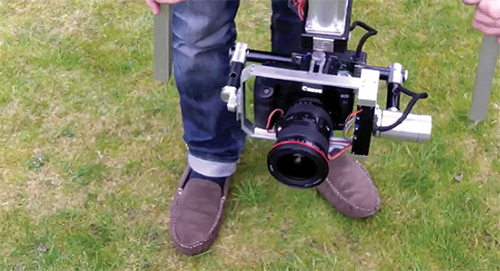 Stabilite is so ‘garden shed’ tech that the inventor kept his slippers on for their first demo film. Whether this product ever sees the light of day out of the garden is debatable.

If you look at the collision of two markets, the remote control model aircraft market and existing stabilisation technology – MōVI has been developed using a price, weight and size tipping point and is a product taking advantage of its moment. 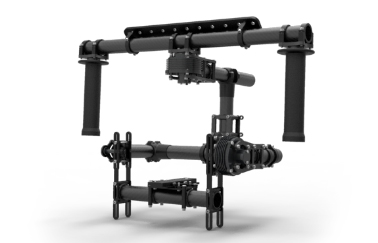 MōVI 10 has three control modes at present. majestic mode is operator controlled via the gimbal base. stabilized control has no operator input and stabilized slew is with a remote operator.

Of course there is nothing new here as the Flight Head Mini won a Tech academy award in 2005.

It is also interesting however that Mōvi is being marketed and priced for end user use and not especially only for rental or specialists. They are also selling direct from their website and deposits of $2500 have been placed. RED’s marketing is again being aped.

Mōvi has had some negative feedback regarding the requirement for a second operator to pan and tilt the camera. However many people don’t understand that it is possible to set gyro stabilised systems to do ‘loose’ pan and tilts, where the stabilised payload does not remain set on a fixed point in space.

The alternative to a second operator is the installation of small switches on the unit itself, operated by the cameraman. Again some negative feedback that it would be very difficult to operate small switches on the handles whilst running around. Maybe its no more difficult than operating a steadicam or operating a Jimmy Jib where moving the Jib as well as panning and tilting can be done as a one man band, but requires an enormous amount of practice to achieve a professional result.

Mōvi’s party trick that will be appreciated by all is the ability to hand off the camera between operators so it can travel through small spaces. Combining Steadicam’s weight distribution and articulated arm with such stabilised technology is the obvious next phase.

The Mōvi YouTube channel will be a must watch!

Thoughts On MoVI : The Camera Gimbal Maker
“The MōVI 10 looked quite cool, a neat bit of kit. It’s quite an interesting idea putting an actively stabilised camera in a rig instead of say a Steadicam. For that you don’t need the control and it works great. It’s a really innovative use of the kit and a tenth of the price of a Steadicam and gives you very similar shots.

“We are designing a gimbal as we always are and trying to take the best bits of those sort of rigs which is the IMU (Inertia Measurement Unit) but incorporate it in to a more professional piece of kit where the cameraman has proper controls and the engineers have proper racking of the cameras to give full colour control.

“There will be a lot of new handheld rigs coming out, the Russians have always been good at the stabilisation side of things, it’s a hand down from their military where they used to have stabilised camera and gun mounts.

“Design-wise for this type of gimbal brushless motors also seem to be more of a fashion statement as well. I thought I was missing a trick by not going brushless, but after some research and experimentation, apart from quietness and longevity (they last a long time as there are no touching parts), in terms of power and speed there is no advantage in them.

“A brushed motor has got a better ramp-up speed and for it’s weight is far more powerful than a brushless motor. But brushless motors are much cheaper to make and they don’t wear out.

“There are some pretty fancy new ones out there, the ones we use now were designed ten years ago. The new gimbal will have as full control of the camera as any of our other products. You’ll have full zoom, iris, focus, colour balance, white balance etc.

“The key difference between the steadicam and these new gimbal rigs is that the Steadicam stabilises vertical movements primarily, the stabilised rig doesn’t do that and cannot do that, it only stabilises rotational movement. So it will stabilise any hand movement wobble but the moment you start jumping up and down particularly if the action’s close it won’t be stabilising that. If the action’s far away then it won’t notice so much.

“I’m hoping we’ll launch our gimbal rig within a month, it has actually been on the drawing board for a long time and I just wanted to see what was around at NAB before I finally pushed forward with it.

“There won’t be enough work for all the companies out there who have a product so only the strong will survive and those will be the ones with TV and film experience.

“There must have been 20 companies at least in the Central Hall at NAB doing model helicopter type stuff. It appears to me that the guys all come from the hobbyist world and none of them seem to have been in television. They seem to be missing the key points that television and film people want. This is proper control, proper joysticks or wheels or something to control the camera, paint control.

“It’s certainly a fashion at the moment, two years ago it was 3D, that’s all disappeared, these remote helicopters are now the fashion.”

Thoughts On MoVI : The Steadicam Operator
So, to the MōVi….

What a fantastic piece of stabilisation equipment! I see this is a logical evolution in the move toward ‘black box’ stabilisation that at some stage in the future will be an all inclusive, all camera, single operator solution. But it isn’t there yet. Many will have seen the MōVi in operation and will have immediately noticed the use of relatively wide glass (24/35mm) and two operators to achieve the desired shot. Many others will have noted the currently quite limited payload leaving it a little too ‘domestic’ to manage a fully loaded Alexa or similar. These points are not criticisms, as I said, I see this as the start of something quite spectacular and I look forward to a day when this can deal with a fully loaded 3D rig flying a twin Alexa setup equipped with master primes or similar (Moore’s Law suggests this will not be too long). However, I think that the generally referenced headline announcing the death of Steadicam through the introduction of MōVi is a little premature. 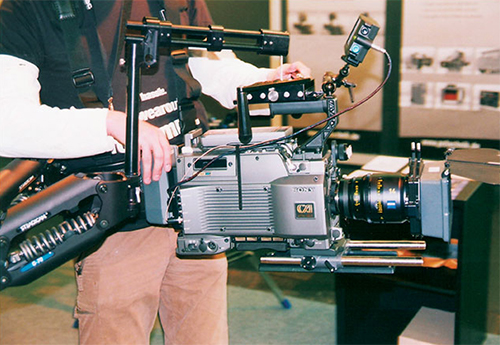 Gorelink plus MoVI could be the way to go.

To look at what the use of a MōVi really means in the context of a side-by-side comparison of Steadicam, one has to start by exploring what the Steadicam Operator’s role involves. It boils down to two key elements and starts with the physical mastery of the rig to ensure that the camera is level, stable and that the operators steps are not visible in the resultant shot. It comes together when this is matched with the artistic framing of the image to capture an aesthetic frame to meet with the desired production values through the placement of the lens in the correct ‘position’ in space.

The MōVi deals quite nicely with the stabilisation element of this but, with the necessity of a second operator to control the aesthetic of the frame, it actually doubles up on the required resource to shoot a stabilised shot. Add in to this the need for decent communications to ensure that the operator holding the rig and the operator framing the shot are ‘on the same page’ and you have all of the components necessary to match what a single Steadicam Operator achieves.

But the versatility of the MōVi cannot be ignored. Think about all of those times when using vehicle mounts and long lenses and the typical vibration that often ends up in the frame. I see MōVi as being an excellent piece of equipment to supplement the use of a Technocrane or on a vehicle mounted arm where you would have to employ a Libra or Stab-C or similar to remove such vibration but here without the budgetary impact of such a head.

This shouldn’t be interpreted as a Steadicam Operator’s defensive or diversionary perspective, I opened with my view that this is an evolutionary step. Where I’d like to see this go is for an increased payload version which can be placed on the end of a Steadicam arm and operated by a single operator. My rationale for the continued use of the Steadicam arm relates to the increased payload point. I suspect asking an operator to fly the MōVi with a fully loaded Alexa under it at arms length (the way the MōVi is operated) is going to be tough for anything other than a few seconds. This will become altogether easier if it is supported by a Steadicam arm. Look at the Gorelink – http://www.walterklassen.com/home-page/equipment-2/handheld/gore-link/ – and then add in the MōVi and throw a fully loaded Alexa under it. Clearly other devices exist to deliver a similar outcome (such as the EZrig) but think about the boom height adjustment than can be achieved with a professional Steadicam arm. From a personal perspective, this is what I would like to see as the logical extension of the MōVi and this is what I can see having the most impact on a professional shoot.

So… far from being a Steadicam killer, I believe that the MōVi will become another tool in the Camera Operator’s toolkit. An exciting tool which opens many doors in terms of shot design but a tool that will take time and training to master for truly effective shots. As its payload increases, it will require supporting equipment to manage the weight on behalf of the Operator, and as such, I believe it is like all such tools, you pick the tool you need to achieve the desired shot called for.