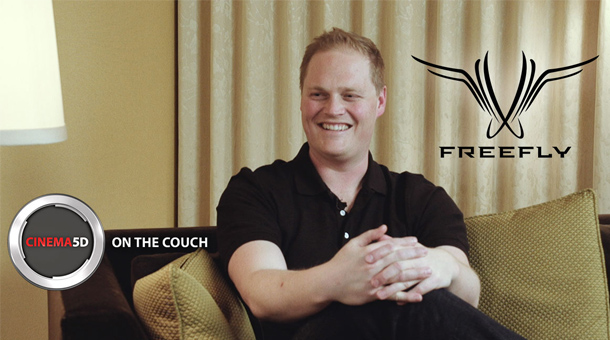 Apologies for the delay in posting more episodes of ON THE COUCH until now, we had some technical problems with some of the recordings, but they are now sorted out. We pushed the less time critical episodes to the end, and there a few exciting ones coming over the next week or so.

On this 10th episode of ON THE COUCH, I talked to Tabb Firchau from Freefly Systems about new things in the world of their famous brushless gimbals. It’s been one year since the fuminant debut of the MōVI M10 with Vincent Laforet’s spectacular launch film, which propelled handheld gimbals into the filmmaking world stratosphere – ever since then, they have infiltrated an incountable number of productions around the world.

The big success of the MōVI introduction spurred a seemingly endless flurry of copycat systems from countless small and big manufacturers, with mixed results. I asked Tabb about this and what he thinks about the long-term success prospects of some of these companies.

Tabb talked about Freefly’s new products – the now-shipping little brother of the M10, the M5, which is made for DSLR-sized cameras, the upcoming M15, the larger version for bigger cameras (such as the Alexa M), as well as innovation around their gimbals which makes them more versatile – for example a ring around the MōVI which makes hand-overs easier, or their plans to release a wheeled dolly-type version of the MōVI.

We also had a chat about Freefly’s history and how they actually got to make make these gimbals in the first place. Freefly Systems’ sister film production company Freefly Cinema used to be their core business as they are all shooters who were looking to ways to move the camera – that’s when they founded Freefly Systems and they realized within 6 months that it had become a much bigger business than the production business.

Watch the episode above to learn more about where Freefly came from, where they are now and where they might be headed!