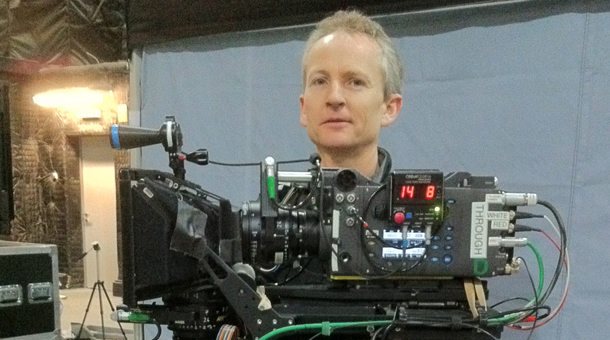 I was fortunate enough to be the B camera / Steadicam operator on the feature film ’47 Ronin’ which was filmed recently at the new Raleigh Studios in Budapest and at Shepperton Studios in London. The Director was Carl Rinsch and the DOP John Mathieson BSC. I had never worked with Carl before but this was my eighth film with John and his usual crew, so I was really looking forward to it.

This was to be my first venture into 3D film making and I don’t mind admitting that I was a little apprehensive, not least because the Steadicam rig was going to be built around two Arri Alexas, each weighing in at 15lbs per body!

The 3D side of things was looked after by ‘Pace’, the company who worked on, amongst other things, Avatar. I knew that the 3D Pace rig I was going to be using would be almost identical to the one which Larry McConkey was shooting with on the Scorcese film ‘Hugo’ so I hot footed it down to Shepperton to meet up with Larry and Olly Tellett (B camera focus and systems tech) to have a look at what I was letting myself in for.

Both Larry and Olly where extremely helpful and I’m very grateful to them both for their guidance. Larry kindly let me try the rig on and two things became clear instantly. One; I wish I’d charged more and, two, it actually didn’t feel quite as bad as I’d imagined. Larry was convinced that, with carrying such a weight (over 100lbs), I ‘d need to operate with a back mounted Steadicam vest, but this turned out not to be the case and I actually felt quite comfortable in my usual front mounted ‘Ultra’ vest. Another thing which became clear was that my Steadicam arm, even though it was the top of the range big, beefy G70, was not going to be man enough to get this payload into orbit! In the end our production hired in the very same beefed-up ‘Pro’ arm which Larry used and even that was stretched to the limit.

After all the usual haggling with Production over money I was on board. They flew me out to Pace HQ in Los Angeles at the end of January so that we could all work out the problems associated with putting two moving cameras on my Steadicam sled. While in LA, I also got to visit the Tiffen factory where Rob Orf and his team were very helpful and supportive; swapping out some older parts on my sled and vest.

During testing at Pace, one of the issues was how we were going to provide the 250 watts to power the Steadicam sled, the Pace 3D platform and two Alexas with lens motors, cinetape etc. It soon became clear that three onboard batteries were needed. Two batteries were not enough and four was just too heavy and would overload the arm. Larry had gone the route of using three batteries connected together and rewired his Steadicam sled with higher gauge cable to minimise the voltage drop between the batteries at the bottom of the sled and all the thirsty cameras etc on the top. I decided that I would instead split the three Steadicam ‘PowerCube’ batteries into two packs. The whole system was 12volt, with one battery directly connected to, and dedicated to powering, one camera only and the other two batteries were paired up in parallel, powering everything else. With everything powered up, the batteries were having to cope with a 10 amp load so every time we docked the rig, we quickly swapped over to mains power to save the batteries. As far as a monitor was concerned, flying a normal green-screen on the sled was out of the question because of its weight and power consumption so I bought a couple of lightweight Nebtek LCD Solar monitors (prime and backup). I missed my green-screen but the Nebteks worked fine. Having a second camera on the rig meant that it was a struggle to get a good line of sight to the monitor and so it was mounted way out, at the end of its rails to help with this. I know that on ‘Hugo’, Larry had rotated the monitor mount around the post slightly to give a better view and I did try this but found it weird not to have everything lined up in the same plain. 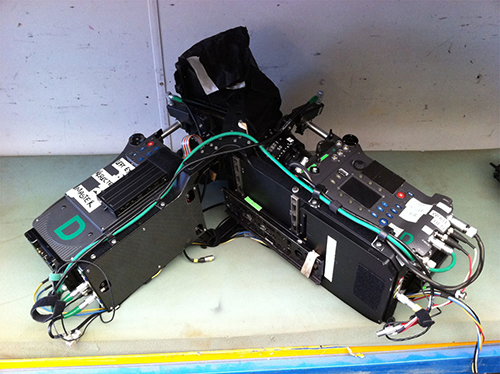 By the time I was on the plane back home, everything had been mocked up with weights and gaffer tape and seemed to work pretty well. I did drawings for monitor brackets, battery brackets, cable requirements etc and left those at Pace so that the finished products could follow me across the Atlantic.

Back at Shepperton, I joined the rest of the camera crew and had a further two weeks of prep during which time we spent quite a few days trying to get the Steadicam to remain perfectly balanced when the interocular (or ‘IO’) and convergence were adjusted. To those not familiar with 3D shooting, the ‘IO’ is the distance between the two lenses, which can be thought of as a 3D volume control and the ‘convergence’ refers to the point at which the two cameras are ‘looking’. On the Pace rig, the top camera rotates (if it was an aircraft, it would be ‘yaw’) to produce this convergence point and translates side to side to effect the IO. So that this camera movement doesn’t effect the Steadicam’s balance, the whole of the Pace rig moves very slightly in the opposite direction, to compensate for the weight shift. Although I was planning to operate with a fairly fast drop time of 2 seconds, we performed our tests with a 3 second drop time so as to not mask any balance problems.

During shooting, the cameras on the Steadicam moved around as the 3D department remotely manipulate the IO and convergence settings and so it was essential that they move in a perfectly counter balanced way. During testing we were struggling to get that final bit of precision in the balance. It was pretty damn good but not perfect! After a lot of head scratching it became evident that the inconsistencies in balance were due to tolerances in those mechanical mechanisms which moved the cameras. A call to Larry McConkey confirmed this and it was agreed that we should deploy a set of high-tech, pre-tensioning, non-plastic, flexible hoops…….that is…… ‘elastic bands’; to take out play in the mechanical sliders. After this was done, things were much better. Many thanks to the guys at Pace (now Cameron-Pace) for their persistence with solving this and all the other challenges and especially to John Harper, who was just as obsessed with the balance challenge as I was.

We all shipped out to Budapest to continue prep and shoot some tests. Our camera packages consisted of full size A, B and C camera mirror rigs and a ‘lightweight’ mirror rig for Steadicam. We also had a ‘side by side’ rig with zoom lenses which we used very rarely for long focal length shots. We had Master primes for the A, B and C cameras and, to help with the weight, Ultra primes for the Steadicam. There was another lightweight platform which was going to be used to build a hand held rig but instead that got used to create the Steadicam rig for the second unit.

The first week of filming was a bit of a baptism of fire. On the first day alone, I had to contend with hours tracking up and down a sloping corridor with the Steadicam, shots down a steep staircase into the bowels of a ship and a sword based fight sequence. I found that everything which is normally pretty tricky for Steadicam, is even more tricky when shooting 3D. Obviously the weight is an issue and it impacts on your operating but you’ve also got a five cable BNC loom going past the gimbal and (as I learnt on the fight sequence) there is a limit as to how fast you can whip-pan. You find that even with the gimbal clamped tightly on the post, the gimbal does the whip-pan and the camera stays where it is! 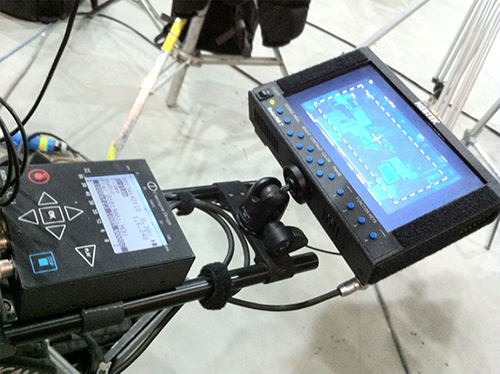 Fortunately our director Carl seemed to always have the well being of the Steadicam operator in mind; a fact partly due to John Mathieson insisting early on that he physically pick up the rig to feel the reality of lugging around a 105 lb camera. Carl was really great all the way through the film and I will always be grateful to him for appreciating the battle I was having to fight. We had a box made up to quickly and conveniently rest the Steadicam on between takes and Carl’s empathetic cry of “box him” became a familiar and very welcome sound straight after the cut! 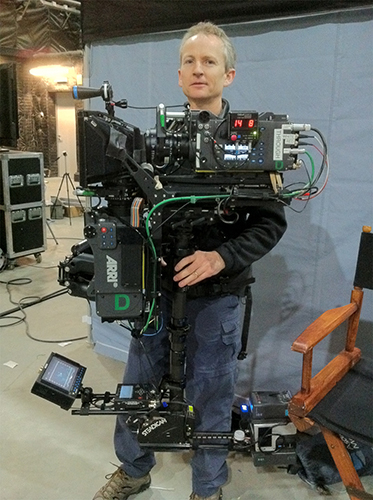 47 Ronin still has extensive CGI work to do and is not due out until Christmas 2013. In cinema, things seem to be gravitating towards post converting for 3D, so I suspect that I might have shot my only ‘true’ 3D film………can’t wait to see it!