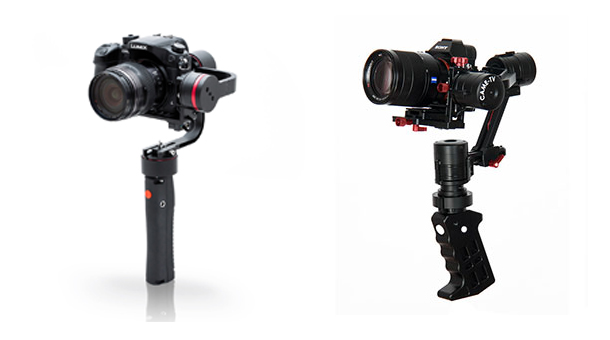 Pilotfly H1+ (not to be confused with the Pilotfly H1 which came out about the same time.) vs. the Came-TV Single

Comparisons
Price: $791 Pilotfly vs $988 Came-TV (it was $888 for a few days)
Payload: 1,200g Pilotfly H1+ vs 1,000g CameTV Single
Battery: Pilotfly battery lasts 1:43, and charges in 1:50, Single lasts 10 hours. Pilotfly battery can’t be changed in the field. H1+ has 500 charge cycles. Pilotfly will have a new version of internal battery for user to replace
Weather resistant: both are not weather resistant.
Weight of unit: Came Single 1,200g and Pilotfly H1+ 890g. The Nebula was 800g which I am not sure I believe, perhaps without batteries. Beholder is 778g with the battery. If too heavy they can make your arm shake a little, so you might get better results with a lighter unit. Weight very important. Dave law, the lighter it is the more you will use it. So if it 35% lighter you use it 35% more.
PID Settings: Pilotfly almost encourages you to change the PID settings, they have setting for about every a7s GH4 lens combo. While Came-TV says, “No modification or amending to the Came Single is allowed. Do not modify or adjust the Came Single.” in the manual.
Motors: H1+ motors can get warm, have not noticed that on Single. H1+ roll motor with the highest temperature, because the control card is mounted on the inside of that motor housing.
Calibration: I also noticed that the Pilotfly needs to be calibrated more often than the Single because the horizon will drift when you first turn it on un-calibrated, in fact I have not had to calibrate the Single yet.
Carry unit without the power being on: Pilotfly easier. CameTV Single feels so much smoother and more accurate but when you look at the footage not that different at all. On the CameTV Single the motor is far back so the eye sensor hardly ever kicks in, which is nice.
Case: I like the PilotFly’s better, smaller and lighter
PilotFly has a better Manual PDF
Pilotfly has a ton of PID settings for each camera and lens combo on their Facebook Page.
PilotFly: the power button gets stuck sometimes
Both can’t open the a7s battery door the way I have them mounted on the gimbal
Both are 32bit and dual IMU.
Inverted mode on H1+ works well! Single: Quote from CameTV, “About inverted mode, for protect roll wires, we have AB stop , so do not support inverted mode.”
Single has encoders. the H1+ does not.
Single sets up so much faster, when every second counts in a run and gun and you switch lenses a lot, this is the one for you.
Pilotfly: The bottom is not very flat for when you are setting it up, fall over easily. I wish it would flange out just a little on the bottom so in inverted mode you could hold it between two fingers.

Conclusion – Which one did I buy?
While the CameTV might be superior in design, when I went to load my camera bag for a hike I reached for the Pilotfly because of the weight is 310g less. When I packed my bag to shoot in a street fair I packed the Pilotfly because it does not stand out as much to the mall security. You actually might get less smooth footage with the CameTV after about 10 minutes because it is heavier.

I’m just starting to understand that you can take a lesser system like the Pilotfly but add IS or IBIS and get equal results to the Single. I think IS or IBIS really helps complete the whole system. So if I can use a lighter system with IBIS like on the new a7Rii the Pilotfly is the one for me.

If you are a beginner, you don’t want to mess with the software get the Single.
If you are not really strong and have many long shots get the H1+.
I purchased the PilotFly H1+