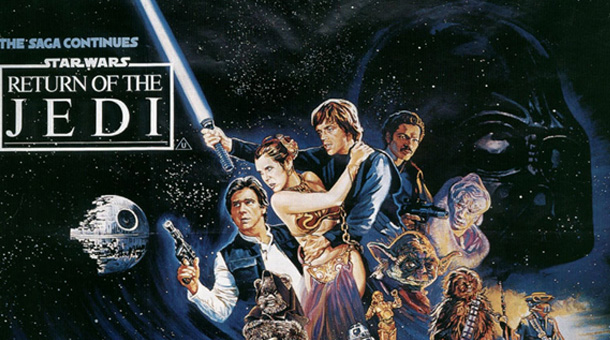 This year marks the 30th anniversary of Return Of The Jedi, the Ewok-filled amazingness that spelled the end of the original Star Wars trilogy. That film contained one of the most amazing high-speed chases ever seen on film. This is how they brought that death-defying chase to life.

One of the highlights of Return Of The Jedi is the speeder chase between the Rebels and the Empire. The Rebels need to distract the Scout Troopers in order to deactivate the shield generator, which would let the Rebel fleet penetrate the Death Star and defeat the Galactic Empire.

But you knew that already.

In the scene, Luke and Leia jump on their speeders and then race through the forest at seriously crazy high speeds. There are tons of narrow misses and there was obviously no way to safely or realistically do this at those high speeds.

That’s because it wasn’t close to real. The natural assumption is the chase was filmed on a dirtbike and then the footage was sped up, but there’s a problem with that: Dirtbikes aren’t exactly the smoothest riding vehicles in the world. The speeders float on the air, which means they need to appear smoother than a motorcycle could ever be.

The solution was clever and somewhat old fashioned. Cameras were operated at 3/4 of a frame per second as cameramen walked through Cheatham Grove, CA with Steadicams. It sounds like it was back-breaking work:

Just 100 more yards. My left hand is slippery with sweat. Legs tired. Brain hurts most of all. I wonder if really intense concentration produces any lingering harmful effects…look at Bobby Fisher! (At a camera speed of only 3/4 frame per second, a thousand feet of precise walking gets you just 16 feet of VistaVision in the can, and every take you forget a few more important phone numbers, or a family birthday.) Is it worth it? At this rate I will be illiterate in a week and a vegetable in two.

Not only was cameraman Garrett Brown wearing the Steadicam, he also had two gyroscopes attached to it for extra stabilization, although a slight amount of wobble was still wanted to make it semi-realistic. He also had to concentrate on the target like a sniper. One misstep would mean a ruined take and another slow trudge through the forest. At 3/4 speed, Brown says that 1,000 feet of walking got him 16 usable feet of footage.

Brown was personally skeptical of the idea when it was presented to him. But instead of saying no, he decided to go for it. What resulted was a cameraman walking slowly through the forest with a ton of equipment, where any slight error would cause him to start over again.

The 3/4 speed footage was sped up 30 times in order to make the film the standard 24 frames per seconds. That also made the speed appear to be a mind-boggling 120 MPH through the forest. Brown had to repeatedly walk through the forest in order to get the right shots. Filming at a slow speed like that also didn’t let them calculate for exposure, but it seems that their guesswork was spot on and the corrections done in post production made for a great looking scene.

Was the agony of walking through the forest super slowly and making hundreds of cuts to get a three minute chase worth it? Damn right it was.