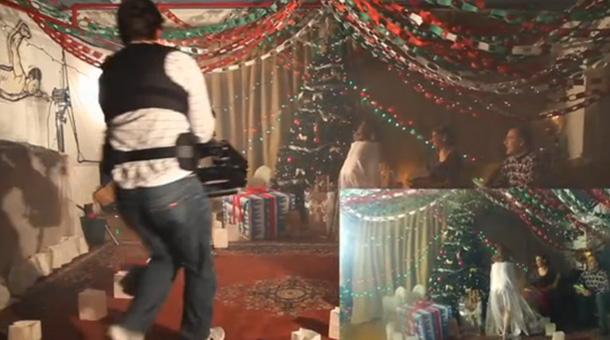 While some of you may still be in the holiday spirit and enjoying time with family, we’ve got a music video from Sufjan Stevens that may or may not make you feel just a little different about the holiday classic “I’ll Be Home for Christmas.” Filmed in 120fps on the RED EPIC, the video took 1 month of preparation, 3 days of set building, and 35 cast and crew members — all for a total filming time of less than 1 minute. Click through to check it out, plus a nifty behind the scenes video of the entire thing in real-time.

Here is the behind the scenes video:

While this probably isn’t what most people think of when they hear the song, the visuals complement the song perfectly. The video is straight out of a dream, or maybe a nightmare, depending on your point of view, and the slow motion of the RED EPIC makes those brief moments last for that much longer. The video was directed by Aaron and Alex Craig, who run We Are Films out of Brooklyn, NY. They’ve got quite a few interesting productions under their belt — check out their reel here:

The song is available on the Silver & Gold album from the label run in part by Sufjan Stevens himself, Asthmatic Kitty Records