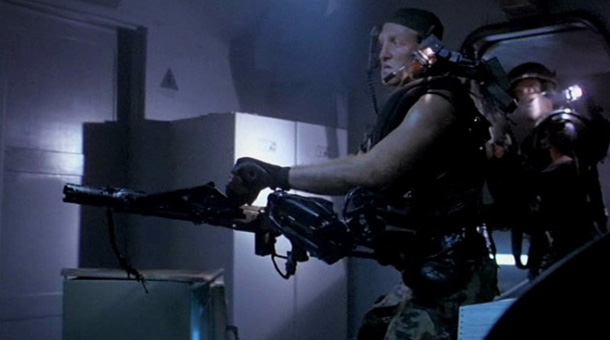 6. Motion Control Split Screen in The Rules Of Attraction
5. SnorriCam in Requiem For A Dream
4. Vas-O-Cam and Shaky Cam in The Evil Dead
3. Car Rig in Children Of Men
2. Bullet Time in The Matrix

1. Smart Gun aka Steadicam Gun in Aliens
Yes. Technically there wasn’t a camera at the end of this rig; instead, there was something way cooler.

Since its conception in the late 70s by Garrett Brown and wonderful first uses in The Shining, Rocky, and Marathon Man, the Steadicam has become an essential to any major motion picture production. It’s quite hard to explain the technical details of it, but imagine having a third arm sticking out of your stomach that is holding a camera – and anywhere you move, the arm counterbalances, keeping the camera held steady. Hence, Steadicam. It looks like this: 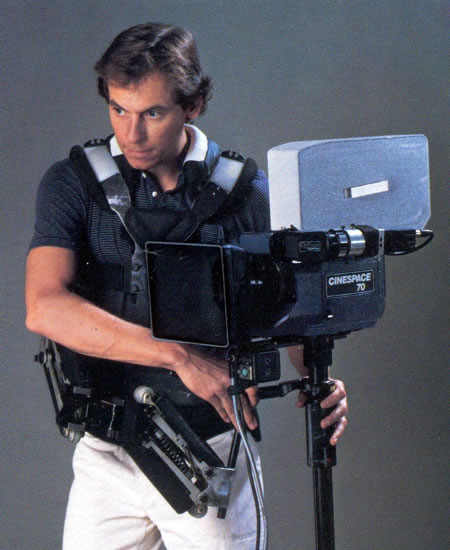 That’s Brown himself manning the rig there. So okay – now picture a German MG-42 machine gun at the end of it, because that’s what the pre-production team of Aliens did. 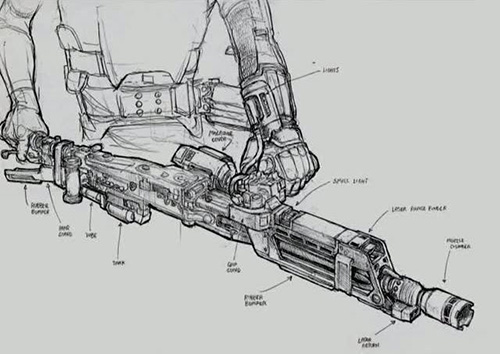 No doubt many reading this have a warm place in their hearts for this particular weapon, and the arm was one of the key details to making this alien drone killer one of the more outstanding guns in sci-fi lore. It’s like the cherry on top.

Surprisingly enough, it wasn’t really a walk in the park to handle either – anyone who has tried on a Steadicam can tell you that the part of the steadying process is redistributing the weight of the camera from the arms to the torso, so you best have a strong back. The case was no different for the smart gun, as Jenette Goldstein (Vasquez) has expressed in interviews, you couldn’t really have the thing on very long.

Small price to pay for going down in badass history, I guess.