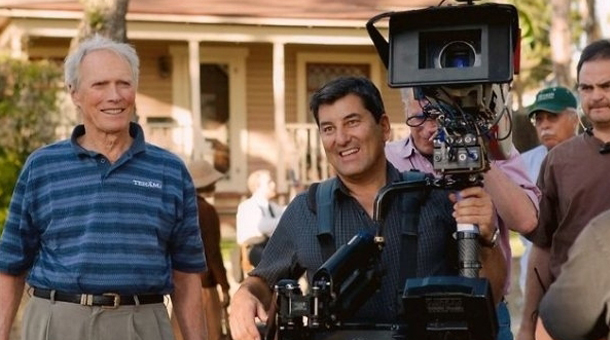 Stephen Campanelli, bought a Steadicam when there were very few around, and quickly became the most sought after Steadicam operator in the country. He was the first to combine “A” Camera operating and Steadicam, and in doing so unlocked an entirely new filmmaking perspective that quickly peaked the interests of some of Hollywood’s top directors including Stephen’s boyhood idol: Clint Eastwood.

Stephen first joined Clint on the Oscar and Golden Globe nominated “Bridges of Madison County” and has remained Clint’s most trusted “camera eye” ever since. They have collaborated on The Oscar winning films, “Million Dollar Baby” and “Mystic River” the Oscar nominated “Flags of our Fathers” and “Letters from Iwo Jima”, and their latest films “Gran Torino,” “American Sniper” and “Sully”. All these films shot through Stephen’s expertise and guidance. Clint, and numerous other prominent directors have entrusted Stephen with crucial on-set directorial decisions, such as setting up shots and blockings, working with the lead actors, shooting rehearsals to capture spontaneity, all of this shot through Stephen’s vision and camera.

After over 22 years by Clint’s side, Stephen jokingly confesses to being a graduate of the “University of Clint Eastwood”, having learned all of the maestro’s directing secrets: his efficiency on the set, his easy demeanor, his way of letting the actors do what they do best… “act”. Stephen is following in the footsteps of a great story- telling director, who has shared with him his vast knowledge, not only of directing, but what it is like to be an actor before a daunting camera.

And now, with Clint Eastwood’s blessing and the admiration of every crew he has worked with, on the 63 motion pictures listed in his resume, and after having been nominated 3 times and won in 2012, for Best Camera Operator of the Year, and getting the prestigious lifetime achievement award from the Society of Camera Operators in 2016, Stephen Campanelli has made the natural leap to the director’s chair, having already helmed 3 motion pictures, “Momentum” “Rio Heat” and “Indian Horse”,…..and is ready to breathe life into his next project…