Home Reviews Steadicam Adds Even More Stability to Gimbal Footage with the All New... 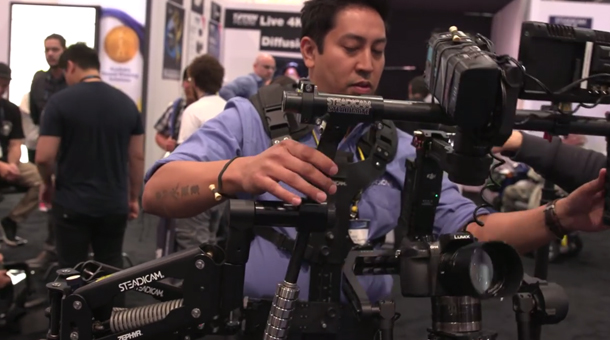 by No Film School

We stopped by the Steadicam booth at NAB to learn about the gear that “combines gimbal tech with Steadicam tech” to give users even smoother camera movement.

First we took a look at the Steadimate, which can be mounted to the Steadicam Zephyr Arm and Vest kit to not only smooth out some of the movements you still get by only using a handheld gimbal, but it also gives you tilt functionality. The Steadimate will begin shipping in 2 to 3 months and retails at $399, but it’s included for free if you buy a Zephyr Arm and Vest kit for $2500.

Steadicam also introduced their new A series, a replacement for their Pilot stabilization system. Alone, the sled supports up to 25lbs. and features P-tap, 1/4-20 weights for balance, a handle, a carbon fiber post and detachable aluminum base. Steadicam isn’t releasing any official price for the A series, but depending on your Arm/Vest setup (Pilot or Zephyr), they say it’ll be in the $1500 to $5500 range. They should make it to retailers by the last quarter of the year.