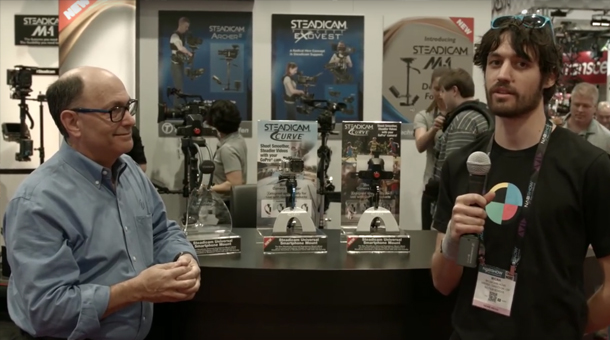 Steadicam came prepared to NAB with a bunch of great tools for stabilization, including the Steadicam Solo, Smoothie, Curve, and M1.

Solo
Aimed at the DSLR market, the most notable thing about the Solo’s design is its versatility. Although it can be operated with the Steadicam vest and arm, as well as handheld, it also extends to be used as a monopod. It’s meant for DSLRs under 10 lbs. Also, the Solo is well-calibrated right out of the box, so if you want to switch between using it as a handheld stabilizer and a monopod you can.

The entire kit is $1495, which includes the Solo, the arm, and the vest. The Solo alone costs $499 and is currently shipping.

Smoothee Universal Mount
This stabilizer was originally designed for iPhones and GoPros, but now it comes with a universal mount, which will allow users to mount any smartphone to it, including an iPhone 6+. The Smoothee costs $149, but no word on how much the universal mount will cost. We’ll keep you updated as we learn more.
Curve iPhone Adapter

Meant for the GoPro specifically, the Curve now has an adapter that lets you mount your iPhone to it. According to Tiffen, the new mounting adapter will be available “very soon” and should retail at about $35.

M1
Able to handle much bigger payloads for larger cameras, the M1 is meant to take users’ attention off of configuration and maintenance, and on the task at hand. It’s also meant to be versatile and flexible, allowing users to use the M1 on a wide range of projects.

The M1s that have already been manufactured have already been sold, but Steadicam says another large batch is on its way shortly. The tentative price for the whole kit (vest, arm, monitor, sled) is $49K, but without the sled and monitor it’s around $20K.