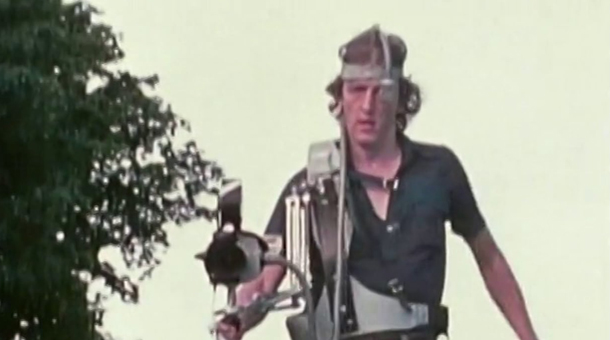 Three-time Oscar-winning Steadicam inventor Garrett Brown holds over 50 patents to various inventions that have changed the way we view images. But he may have also unknowingly invented the first viral video back in 1974, long before YouTube became a household name.

Brown, who was making commercials and films for Sesame Street in Philadelphia at the time, was sick of working with a huge bulky camera dolly and wanted to find a solution that let him walk freely yet have smooth images. So he took matters into his own hands and came up with the Steadicam. Brown started using it on his commercials, but soon realized he was onto something much bigger.

He created a demo reel of 30 Impossible Shots, the very first cinematic use of the Steadicam that included shots of a friend swimming the length of a pool and his wife running across a park and up and down the Philadelphia Art Museum steps. The resulting footage is stunningly beautiful, opening up an entirely new realm of possibility for how films are shot.

Brown sent the reel to Hollywood where it blew up overnight, creating possibly the world’s first viral video. Impossible Shots was passed around to many key players, who were mesmerized that such filming was suddenly possible without building dolly tracks. It was clear that filmmaking would never be the same.

The Steadicam represents for cinema not just an image stabilizer, but a whole new instrument for elegantly moving the lens through space. “Our brains process the way we see the world — like our own ongoing personal biopic — a beautifully smooth, God’s eye-view, director’s eye-view, objective shot that let’s us see our world in cinematic terms,” says Brown. “And so I think part of the durability of Steadicam is it’s the movie device that comes closest to that vision.”

As with most viral-video creators, Brown’s life was never the same again. John Avildsen got a copy of his Steadicam shots and called Brown up for Rocky. They recreated the scene on the now famous Art Museum steps with Sylvester Stallone that became the victory shot of his training sequence.

Of the 30 original shots included on the reel, Brown has been able to salvage and digitize 10 of them, to be shown to the Locarno Film Festival’s Summer Academy students on Friday. The 67th edition of the festival in Switzerland will honor Brown with its Vision Award. He’ll also teach a masterclass as part of the festivities. This is the first time Brown has put Impossible Shots online, and now the original viral video has gone full circle.

One of those reels also happened to land on Stanley Kubrick’s desk and the famed director soon booked him for The Shining. “Normally you could show the results onscreen,” says Brown, “and no one would have a clue how it is done — except Stanley.” Brown shares Kubrick’s telexed reply with Hollywood Reporter:

“Demo reel on hand held mystery stabilizer was spectacular and you can count on me as a customer,” Kubrick telexed to Brown, according to a copy obtained by The Hollywood Reporter. “It should revolutionize the way films are shot.”

Kubrick also pointed out a mistake: “If you are really concerned about protecting its design before you fully patent it, I suggest you delete the two occasions on the reel where the shadow on the ground gives the skilled counter-intelligence photo interpreter a fairly clear representation of a man holding a pole with one hand, with something or other at the bottom of the pole which appears to be slowly moving.”

“Of course, we were horrified,” says Brown. “And he was right, so we ran into the screening room and cut those fourteen frames out of the demo so that nobody else would figure it out before it was patented.”

Another invention that was key to The Shining was a special wheelchair designed by Kubrick and Ron Ford that carried Brown and the Steadicam along for the infamous shot of Danny riding his tricycle through the hallways of the Overlook hotel. “Stanley and I would argue about the details, how it should be arranged and so on. There was a little bit of inventor-possessiveness there,” says Brown.

“All-in-all, I think, It was really fortunate for both of us because the timing was perfect. He had an enormous set where you could not make the floor level enough for conventional dolly shots. I had a brand-new toy and it would go low enough to shoot those shots of Danny. I was very lucky in a lot of respects. That was a great piece of work.”

Brown says that while the work was strenuous, he would have worked all day every day if he could have. “I loved Kubrick. I’m so sorry he’s gone and we all will never get to see the films he might have made,” says Brown. “The Kubrick Exhibit is an astounding reminder of how hard he worked and how many amazing projects he had in development.”

The Steadicam movement is still going strong today, forty years later, and still one of the most natural ways to achieve fluid movement on film. “That is amazing these days,” says Brown. “What other 40-year-old invention are we still using besides the hammer and the screwdriver?”